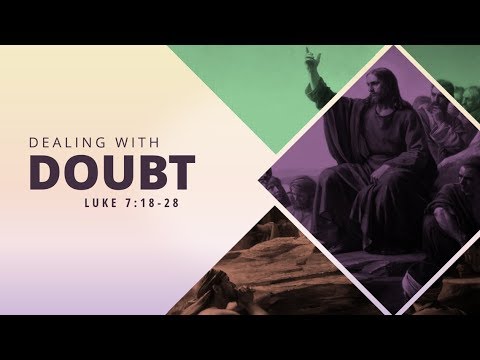 We use that phrase more than we think. Now this word can come up another way. Maybe somebody, somewhere has asked you, “Do you ever have doubts about God?” That question should be easy to answer because all Christians have doubts at times. If you are one of these people, and I am assuming most of you are, that is why we are reading about John the Baptist and the doubts he had while in prison. After all, could he, one of the greatest of all prophets, be someone who was always confident in God, Jesus, and His Word? I DOUBT it.

Last week we talked about how John began his message by referring to his listeners as a “brood of vipers,” a bunch of snakes. That’s not a very flattering image, is it? Can you see somebody at the entrance of a church, with a GREETER badge on their lapel, calling our visitors “snakes” and warning them to shape up or they’ll get the ax? But John needed to get the attention of the Jews two thousand years ago. The Jews of Jesus’ time thought that just because they were Jews because they could prove that they were direct descendants of Abraham, that was what would save them. John had to make it abundantly clear that being a child of Abraham was not enough.

That was the beginning of John’s ministry. Today we are near the end. John is in prison. He will soon be executed at the whim of a good looking girl and her spiteful mom. And prison has been hard on John. Remember that John was a man of the desert, an outdoorsman. In our text we find him cooped up in a dungeon. And he didn’t take it well. And we know this by what the text today has to say.

John knew what he thought he knew—about Jesus and about his own calling. John had been quite sure about Jesus. John knew his job was to prepare the way for the Savior. And he did that with gusto and doing a lot of yelling at people. John had proclaimed Jesus as the Christ. John looked at Jesus approaching him and proclaimed, “Behold the Lamb of God, who takes away the sins of the world.” John even baptized Jesus in the Jordan River. John had it all straight in the beginning.

So now what? What’s going on here? Jesus’ announcer was imprisoned at one of Herod’s fortresses. John was arrested for denouncing Herod. John pointed out, correctly I might add, that Herod was guilty of adultery in divorcing his wife and marrying his brother’s wife. And while in prison, John began to have doubts about Jesus.

In our text, we see John is taking another look at what he thought he knew about Jesus. John, like everyone else in those days, may have expected the Messiah to bring judgment. The popular expectation was that when the Messiah came, it was to kick the Romans out and liberate the Jews. But Jesus had not done that. Jesus had done only works of compassion and mercy.

Given John’s ugly circumstances, what Jesus was doing didn’t seem to make sense. We certainly cannot blame John for wanting Jesus to help him get some vengeance and some justice. No doubt John was asking, “Why doesn’t Jesus bring judgment on Herod?” John was feeling neglected by God, after doing what God had sent him to do.
Adding all this up, John’s mental state and his enforced isolation led to confusion and doubts. And those doubts led him to send his friends to ask Jesus, “Are you the one who is to come, or shall we look for another?”

This is a sad section that we find here in the Gospels. As a pastor, John the Baptist has always been one of my heroes, if you will. It is sad to see such a bold proclaimer of God’s Word having doubts, and those doubts increasing his misery.

But John is not alone in what happened to him. Lots of people have a false idea of Jesus and then get mad or reject Him when He doesn’t do what He was never sent here to do. What about you? What faulty expectations do you have about Jesus? Many people think Jesus is like Santa Claus, ask Him for whatever you want, and if you are nice, you get it. Many people seem to think if they show up for church once in a while and put a few bucks in the plate, that everything should be hunky dory from then on. But that is not how this works. It is not true that faith in Him means we won’t suffer illness, lost jobs, worry, anxiety, frustration.

In the text, John looks to Jesus to resolve his doubts. And that is the right thing to do. John takes his doubts to the right place: to Jesus. John sent his disciples to speak to Jesus for him (vv 18–20). And Jesus explains that His actions speak for themselves: Jesus is fulfilling the Scriptures as the Messiah (vv 21–23; Is 35:5–6; 61:1–2a).

There is no doubt Jesus is the one sent from God as our Savior (vv 24–28). John was right in the first place. Jesus is the Lamb of God who takes away the sins of the world. Jesus is the one we can look to for assurance with all our doubts, for He has died and risen for us. He has given us His love and forgiveness. He has given us eternal life. He has fixed things between us and God. And he has promised to be with us always, and He is with us all the time. Things may not always go our way in this sinful, messed up world. We know that. But God is for YOU. Jesus is for YOU.

So, did John finally come to terms with his questions and doubts? We can assume so, because his faith was searching for reasons to believe, and Jesus gave him plenty of reasons for believing that He was indeed the Christ, sent from God. When our expectations about Jesus are contradicted by our experiences, when bad stuff happens, and we are tempted to blame Jesus, let’s follow John’s example. When we ask, as John did, “Are you the one who is to come, or shall we look for another?” Jesus answers us (as He did for John): “Go and tell what you have seen and heard: the blind receive their sight, the lame walk, lepers are cleansed, the deaf hear, the dead are raised up, and the poor have good news preached to them. And Blessed Is the One Who Is Not Offended by Me.”

No doubt about it. Jesus is your Savior. And mine.