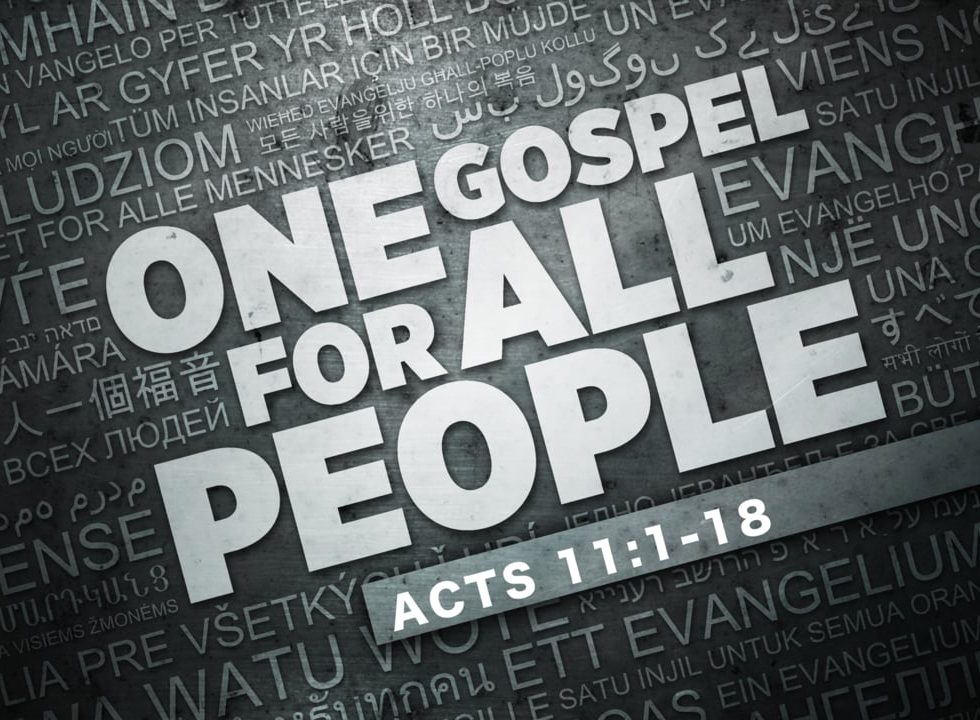 Last week I told you how the other people in my house just love the critters. And you have heard me discuss our cats we got at the start of the year. I know that some of you are into animals, big time. So how about this: would you let a stray dog crash your wedding?

In October 2017, a stray dog did crash a wedding. A couple named Matheus and Marilia were getting married in Brazil. They had planned an outdoor ceremony, but a storm forced them to shelter under a tent. Unfortunately for the guests, it was at this point that a homeless dog showed up. Oh, they tried to shoo him away, but the dog was persistent. Her kept coming back. Eventually, the pooch did something that got everyone’s attention. He plopped right down on the bride’s long dress as she was saying her vows, and he went to sleep. And you know what? Surprisingly, the bride left him there.

This dog wasn’t the only “dog” who ever crashed a wedding. Let’s talk about that today using the theme: Salvation is for All People.

In terms of Biblical times and culture, who were the dogs? From the perspective of the Jews, they were the Gentiles. The Jews had other names for them, but I can’t really share them here. You get the picture. There wasn’t much love between these two groups of people. (The Jews, longtime victims of racism, were racists then.) That’s why the news concerning the Gentiles—that those pagans had believed the Word of God—was so shocking. This meant they could be part of the Church!

It shouldn’t have been so surprising, though. Recall what God said to Abram: “No longer shall your name be called Abram, but your name shall be Abraham, for I have made you the father of a multitude of nations” (Gen 17:5).

Then there was the parable Jesus taught. It was about a wedding feast, and those invited (the Jews) wouldn’t come. What did the king do? Jesus explained: “Then he said to his servants, ‘The wedding feast is ready, but those invited were not worthy. Go therefore to the main roads and invite to the wedding feast as many as you find.’ And those servants went out into the roads and gathered all whom they found, both bad and good. So the wedding hall was filled with guests” (Mt 22:8–10). The wedding was filled, even with naughty, terrible Gentiles!

But God did include them. The Gentiles were on the guest list. There was/is room in heaven for them! Peter had to do some explaining. First, he told them about his vision. Then he gave evidence of the word of Jesus, and you know what? They were convinced. They realized they were wrong. They allowed for “the dogs.”

Our text explains: “They glorified God, saying, ‘Then to the Gentiles also God has granted repentance that leads to life’ ” (v 18). This was news of epic proportions. It shook up the world back then and should shake up yours.

The Bible says: “You are all sons of God, through faith. For as many of you as were baptized into Christ have put on Christ. There is neither Jew nor Greek, there is neither slave nor free, there is no male and female, for you are all one in Christ Jesus. And if you are Christ’s, then you are Abraham’s offspring, heirs according to promise” (Gal 3:26–29).

“For there is no distinction between Jew and Greek; for the same Lord is Lord of all, bestowing his riches on all who call on him. For ‘everyone who calls on the name of the Lord will be saved’ ” (Rom 10:12–13).
Jesus Christ died for all! The sins of the whole world, everyone, were nailed to the cross! Jesus died and rose for everyone!

There it is again—there is no distinction, no “us” and “them,” no exclusive club. It doesn’t matter where the person is from, what they like or don’t like, or who they’re related to or are not related to. To God, salvation is open to all. To put this another way, there is no place in the heart of a Christian for racism, sexism, ageism, beliefism, or any other “ism.”

There are lots of “Gentiles” around us. They are our neighbors, co-workers, and classmates. They are those that maybe, in your mind, you could never imagine within ten feet of heaven.

What would God have us do with them? It’s easy, really. Love them. That’s it. Love them because they, too, could be fellow believers in Christ. And if they’re not? Love them anyway. The Holy Spirit might just do His thing and they will receive what we have received.

This is not saying we have to embrace everything they believe out there. We don’t even have to hold hands and sing “Kumbaya.” No, nothing like that. However, we can treat everyone like we would like to be treated. After all, doesn’t the Bible make a promise about them too? “For God so loved the world, that he gave his only Son, that whoever believes in him should not perish but have eternal life” (Jn 3:16). It sure does!

And that leads us back to the wedding crasher mentioned at the start. So how did that end up? As the story goes, the dog came and went. The reception went on as planned. The couple was a little sad to see the dog disappear. But days later, they found him . . . they cleaned him up . . . adopted him . . . and named him Snoopy. Who would have thought?