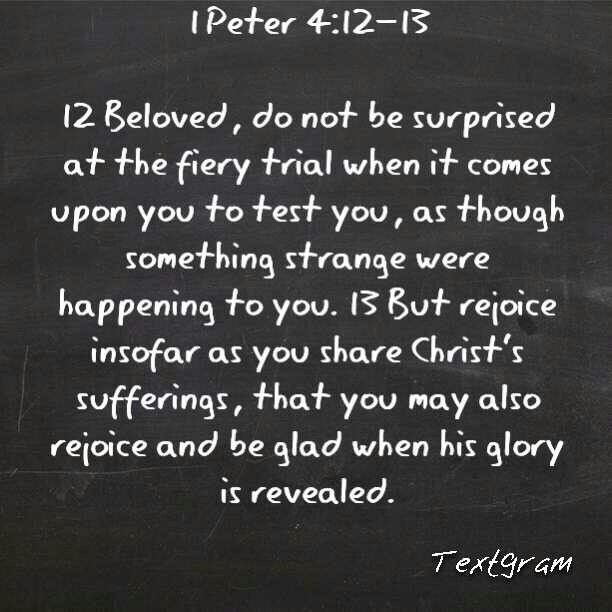 Centuries ago, the Roman Church, working with civil authorities, often had people put to death. It was common enough that we rarely take note of any particular cases.  An exception to that would be on July 1, 1523, two Augustinian monks were burned to death in Brussels, Belgium, by the Inquisition. Their names were Heinrich Voes and Johann Esch. What was their crime, you might ask? They were teaching the doctrines taught by one of their Augustinian brothers—a man named Martin Luther. These were the first men ever killed for teaching Lutheranism. Like Martin at the Diet of Worms, they basically said, “Here I stand, I can do no other.”  At the cost of their lives.

It’s this sort of persecution Peter describes as a “fiery trial” coming upon us because of our faith (1 Pet 4:12).  But, let’s face it: It Seems a Little Strange for Us in Our Country Today to Think about Persecution, Doesn’t It?

We in this country aren’t likely to be burned at the stake or thrown to the lions or beheaded for being Christians. And so it makes it easier for us to just overlook these verses and think they do not apply to us.  Yet Peter begins, “Beloved, do not be surprised at the fiery trial when it comes upon you to test you, as though something strange were happening to you” (v 12).

The fact is that persecution of Christians, in one form or another, has been the normal state of affairs throughout most of the history of the Church. I am going to restate that: through most of the church’s history, the church, the believers in Jesus Christ, have been harassed or attacked because of their faith.  Peter is writing from Rome towards the end of his life. When Peter wrote this, they were still a few years from Nero and others killing Christians for fun and sport.  But Peter is anticipating that day. He is warning his fellow believers, particularly his fellow pastors, that they need to be prepared.

See, Peter makes the point that persecution should not be viewed as strange. Rather, Peter tells us to expect persecution to be the normal state of affairs. Those who are of the devil, the world, and the sinful flesh will always hate those who trust in Jesus Christ. Look how Christians are treated in the world. There is the Christian pastor in Iran who awaits execution.  There are those Christian children in Nigeria who were kidnapped by Muslims.  There is the gal in the Sudan who just had a baby who is going to be whipped 100 times for adultery (which is what you are charged with there if you marry a Christian) and will be executed in two years, for refusing to renounce Jesus.

We in America have experienced something quite unusual, with our laws regarding the freedom of religion.  But after 200 years, even here, we Christians are persecuted or harassed for our beliefs. How often are political candidates mocked in the press if they believe God created the heavens and the earth? How often are they mocked in the press if they are pro-life? How often are they mocked when they stand in favor of our friends at Hobby Lobby and all the churches fighting government healthcare rules that require violations of pro-life doctrines?

Then there is the Air Force cadet who was sanctioned for the offense of putting an Epistle verse on the dry erase board on his dorm room door.  Or how about the twelve year old in Florida who during free reading time in his public school, his teacher took his Bible away saying that he could not read that there?  (What the teacher did WAS against the law, by the way)

It seems strange, doesn’t it? But God has a purpose in allowing such persecutions. These trials, Peter says, are “to test you.” There’s the sense here in this text that sufferings lead us Christians to grow in faith.  That does make sense if I tell you that if everything always goes perfectly for us, we are then tempted to think we do not need God, right?  When things aren’t going smoothly, do we not then turn to God and ask for help?  In this sense, persecution can be a blessing, as Peter states.  “If you are insulted in the name of Christ, you are blessed.”

The devil will use such persecutions as a trick. He “prowls around like a roaring lion, seeking someone to devour” (v 8). He cannot actually harm us. He roars loudly to create fear. He would use such fear to get us to deny Christ. But God is also using “fiery trials” for a purpose, His purpose. “If you are insulted for the name of Christ, you are blessed, because the Spirit of glory and of God rests upon you” (v 14). Strange as it may seem, it’s actually a great blessing to be counted worthy to suffer for the name of Christ.

Because of Martin Luther’s brave declaration made at his trial before the heads of church and state, Lutherans have always had a tender place in their hearts for any Christian whose conviction moves him to confess, “Here I stand.”

With that in mind, I submit to you something Ken Klass, retired Lutheran Hour speaker, wrote about a few weeks ago.  He wrote about the Chinese city of Wenzhou and its newly constructed Sanjiang Church. This was a big building, it seated more than 2000 worshippers and cost 4.5 million dollars to build.  This town is referred to as “Jerusalem of the East” because 15 percent of the folks there are Christian.  Pretty good for China.  Last fall the government said the building was a model engineering project.  A couple of months ago, the local Chinese authorities stated the church had been built illegally, was structurally dangerous, and had been condemned.

Now some Christian communities might wring their hands and say, “Woe is me.” Others might sigh and say to themselves, “You can’t fight city hall.” Yes, that is what some might do, but there aren’t many believers like that in the Chinese community of Wenzhou.

No, those faithful folks did a “Here I stand” kind of thing. Without prompting, thousands of believers came together and held a vigil to hold off the bulldozers.  It didn’t take too long before the Christians who had responded emotionally got themselves organized. Soon a round-the-clock protest was mounted. Kitchens were set up to feed the volunteers who ringed the building. Old men and women spent their nights sleeping on church pews. They did this to fend off any night demolition, which might be ordered by the authorities.

That faithful attitude and courageous commitment may help explain why it has been estimated that in 15 years China will have more believers than any other country in the world. Conversely, the lack of a courageous “Here I stand” attitude may also be why church attendance and membership figures are falling in Europe and on our own side of the globe.

I would love to tell you that this China story has a happy ending, but the Chinese government got everyone out of the building and destroyed it on April 28.

Peter was telling the Christians in his time, and the Christians of today, that we are preserved by Christ in the face of trials. While that building is gone in China, the Church is still there.  The believers are still there because the Holy Spirit is still with them.  We do not preserve ourselves. Jesus keeps us safe from true harm. And what is true harm? True harm is denying Jesus Christ. We cannot save ourselves. Jesus must save us. If we deny Him, we are lost.

Peter reminds us that God is always faithful to us. And Christ Jesus Himself is no stranger to persecution. He gave His life on the cross and rose again so that we would never be separated from God. We can entrust ourselves to God’s care, even in the face of persecution, harassment, and other “What?!?” moments we have these days.

As we move from Easter into Pentecost, the so-called Time of the Church, we are reminded that the Christian is always under pressure from the world. From the time of Peter, beginning with Stephen, until the present day, Christians are under attack. It is said that more Christians died for Jesus Christ in the twentieth century than in all the previous centuries combined. The persecutions have not ended. They never will end, until the return of Jesus Christ in the final judgment of this world.   We are not left to stand alone.  There is nothing strange about being persecuted, because Jesus, who suffered all, will always be right there with us. We stand with Jesus Christ because Jesus Christ will stand with us.