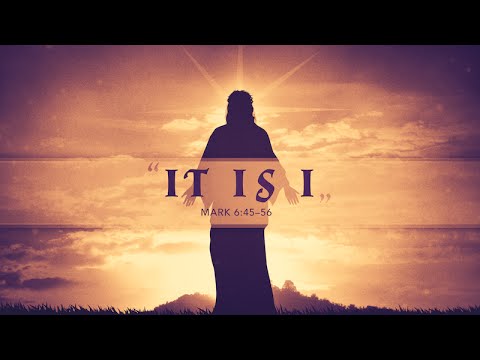 Many times when things are going well we refer to life as “smooth sailing.” When they are not we talk about life as “rough waters” or “a rough patch.” This is not a new thing. The hymn “Jesus, Savior, Pilot Me” was written by Rev. Edward Hopper in the 1800’s when he was pastor of a New York church that served guys who worked on ships. He was thinking of them when he wrote, “Jesus, Savior, pilot me Over life’s tempestuous sea; Unknown waves before me roll, Hiding rock and treach’rous shoal. Chart and compass come from Thee. Jesus, Savior, pilot me” (LSB 715:1).

These days, when many of us fly more than we sail, Jesus as our pilot might suggest a similar image. I remember being on a puddle jumper in 1984 that flew over a tornado. I did not know that at the time, but I knew we were flying in a storm, and it was quite disconcerting to look forward and see the pilot wailing on the rudder pedals in the hope our plane would not go into a flat spin. I was rooting for some help for the pilot from Jesus then.

It would be nice if Jesus would steer us clear of all storms, but we know it does not work that way. No, Jesus Doesn’t Steer Us Clear of Every Storm, but He’s Right There with Us When We Are in the Middle of Them.

In our text, the disciples find themselves in a storm, and it comes at the end of a very long day (vv 45–48a). Our text follows last week’s text. Jesus has just fed more than five thousand folks. Jesus had received word of John the Baptist’s death. Huge crowds were looking to Jesus for healing. He has been busy. Even Jesus gets tired; He sent the crowds and His apostles away so that He could rest and be energized by a time of prayer.

Now there are those who think that surely Jesus, who created wind and rain and sea, could arrange some “smooth sailing” for His friends after a busy day like that. But no. Jesus was busy praying, but apparently not for fair weather. Now for all we know Jesus did this on purpose to show the boys He could walk on water and that He can break the laws of physics. (THAT HE’S GOD!) But for those guys, being with Jesus did not mean life was going to be smooth sailing.

Jesus doesn’t steer us clear of all storms. That is not the deal. Bad things happen here because sin is bad and sin is here. Look at the Bible. Job didn’t deserve his fate. Jonathan (the son of King Saul) didn’t deserve to die at the hands of the Philistines. John the Baptist didn’t deserve what he got from King Herod. Look at all the bad things that happened to Jesus and He never did anything wrong! Being reminded of that, it should not surprise us bad stuff happens to us.

We may try to deny that storms will come, or we think that as Christians we won’t experience storms, difficulties, problems. I think deep inside here, we expect life to be smooth sailing because God is here (heart), because we are here, because we put money here (the offering plate). The Bible does not teach that.

There are those out there who teach that you will be rich, that you will never be sick, that your relationships will always be conflict-free as long as “you have enough faith.” These guys make me mad. You know why, right? Because the Bible does not teach this. There are those who think that with faith you will have a perfect life. There are those that think when the storms come, Jesus should have prevented it and lose their faith in their loving, giving Savior.

Another problem that can spring up is that we may be so overwhelmed by storms that we just give up and forget that God is bigger than any storm. There are so many people in hospital beds, rehab centers, psychiatrist’s couches or who are lying awake in their own bed at 3 a.m., who think that their trial or crisis they are dealing with is something they are facing alone.
And then there is the problem when we try to take care of storms ourselves. The old “pull yourself up by your own bootstraps” thing where we push God away and try and handle things all on our own. We’ve all been there. We’ve all done it. And how has that worked out for you all?

Because we never know what’s coming, we need to admit our inability to rescue ourselves and rely on Jesus for help in our unexpected storms. The U.S. Air Force’s 53rd Weather Reconnaissance Squadron, based in Biloxi, Mississippi, is known as the “Hurricane Hunters.” Their mission is to fly right into tropical storms to gauge their power and movements. But just as actual hurricanes have an “eye” in their middle—so do our storms in life. Hurricanes, you know, have that calm spot at the center. Instead of steering us clear of every storm, Jesus comes to us as the eye/I in the middle of them (vv 48b–50). For those 12 in that boat, everything changed when Jesus called out to them, “It is I!” Jesus is the “I” in our storms. And that is a reminder for you that when you are in a hospital room, when you are lying awake at three in the morning, when the boss tells you that you have lost your job, Jesus is with you.

Let’s finish with this: Ken Klass in his devotions a couple of weeks back told us the story of Amelia Milling. Last month Milling was hiking in Alaska’s Chugach State Park. She was a couple of hours into her stroll when she stumbled and fell. Milling fell about 700 feet. Amazingly, it appeared as if everything was okay. Sure, she had some aches and pains, some bruises and such, but nothing appeared to be broken and everything was just as it should be … except for the large wolf who was watching her every move.

To her credit, Milling didn’t panic. She kept her head and studied the wolf who was studying her. Her mind raced, as she tried to decide what she should do. The choices became easier when she saw the wolf was wearing a collar. That was interesting. As far as Milling knew, Alaskan wolves did not wear collars, but some big white Huskies do.
And this Husky seemed prepared to help.

The Husky’s name is Nanook, and Nanook is a trail-guide dog. His job is to help lost folks return to the trail.
Nanook guided her back to the trail and camped with her overnight. The next day Nanook stayed with Milling as she attempted to cross a river. The spot was too deep, and Milling fell in. As she scrambled to the shore, Nanook helped her out of the freezing water.

It turns out the dog is not trained. He was a rescue, and his owner says Nanook just goes on the trail by himself looking to help people. Two years ago, a six-year-old girl had fallen into the river, and Nanook came to the rescue then, too.

In Jesus, we have a rescuer who is fully trained to help us. He died for us. He rose for us. He took away our sins. And He is always with us, even when things are not going our way.
Being a Christian does not mean that the storms of life are going to be kept away from us. But it does mean that wherever we are, whatever we are going through, whatever we are dealing with, Jesus IS WITH US.

You will never be alone. That is His promise to you.