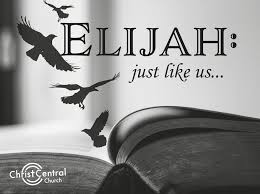 When I was a kid, I liked to play sports. Football, basketball, softball, tennis, golf, lots of different ones. And my folks and coaches always said, “Practice makes perfect.” In other words, if you work hard at it, you’ll get better. And I practiced. The sad truth is that did not always work out for me. I played a lot of basketball, but I didn’t really get any better. I played a lot of golf. Disc golf too. Don’t really get any better. I practiced driving before my driver’s test in 1978. I practiced a lot. Still hit that electric light pole trying to do the Y-turn. When you put a lot of effort into getting better at something and you don’t get better and you don’t see results, well that can be discouraging. If you work hard to get something done and it doesn’t get done? Discouraging.

That happened to Elijah in our text. In the chapter before our text, at Elijah’s request, God sent fire from heaven to consume the sacrifice of a bull, the kindling wood, the stones of the altar, and the water he had poured over it. The people of Israel realized how stupid it was to worship Baal, and said, “The Lord, he is God; the Lord, he is God,” (1 Ki 18:39). Elijah slaughtered the 450 prophets of Baal. Elijah then told King Ahab to mount his chariot and leave because it was to rain and end a three-year drought. And it happened just as the prophet said. Finally, all his work had been rewarded.

Except nothing changed. Queen Jezebel was not repentant but instead, she was angry, threatening to kill the prophet. The people went right back to worshipping Baal instead of the Triune God. The people had forsaken God’s covenant, broken down His altars, and killed His prophets. Elijah thought he was alone. So he went out into the wilderness, crawled under a tree, and asked God to take his life.
God always answers our prayers, but sometimes He gives us something way better than what we asked for. This is most certainly true, in this case. For him and for us, The Lord Has the Answer for Our Discouragement.

This is one of those Bible texts that we can all relate to. When we work hard but then do not see results, we can get discouraged (vv 1–4). For instance, maybe you have had a problem at school. When I was in college, I got a tutor to help me with calculus. And so, you decide to buckle down, work hard, put your nose to the grindstone, your shoulder to the wheel. The problem then is how do we feel when we do all that, that after all that effort, all we have is a broken nose, a sore shoulder, and a grade that has not changed? (Me & a C)

Maybe there is something like this happening to you at work? Your sales are down, your performance reviews aren’t as good as they used to be. You decide to take it up another notch, kick it into another gear. You work longer hours, you do what the bosses say they want and then some. How do you feel after you have put in all that extra effort, that your performance, your sales, your reviews don’t change? That can be discouraging.

This can happen in church, as well. We love the Lord and, like Elijah, we want God’s kingdom—and our congregation—to grow. So we pray. We attend worship services. We volunteer to teach Sunday School or to usher. We give of our income. We can do all those things, and still not see the congregation grow the way we want, and it’s not unusual for the finances to remain tight.

What we often forget is that we cannot make our congregation grow only by our own efforts. The Holy Spirit does that, not us. We are to give the church our work and our time and our talents and our tithes. God wants us to use our gifts and use our talents and be the church in here and out there, but that does that does not guarantee our attendance will go up. Sometimes a church grows not in numbers, but in the faith and confidence in God of each member. Sometimes the growth is not seen by us, just by God.

So wherever we are: school, church, work, we may get discouraged. At times like these—when we are discouraged, Jesus Christ Himself will pick us up.

Look at what happened with Elijah. The Lord gave Elijah His better answer (vv 5b–8). As God had fed His people Israel in the desert with manna, as God the Son would feed five thousand in the wilderness, here God feeds His prophet. While Elijah was under the tree, waiting to die, God did not grant his prayer. Instead, the angel of the Lord came to him and brought bread and water. God gave His prophet the strength to go on. Then in the verses after our text, Elijah, who has walked for 40 days and nights after eating God’s cooking (now those are some energy bars), arrives at Mount Sinai where God tells the prophet he is far from alone and his work is not in vain (19:15–18). Elijah thought he was the only one left who believed. Elijah thought his work was pointless. You ever feel that way? Well, God told Elijah there were 7000 in Israel who had not worshiped Baal, and God is telling you today that we are not alone, either.

Just as God made this offer to Elijah, Jesus invites us, too, to cast our cares upon Him. After all, He took our sins upon Himself. He carried all of them to the cross, where He died the death we deserved and paid all the debts we owed for them. And then, of course, He did not stay dead! He rose again! He won for us forgiveness of sins, life, and salvation.

And that’s not all! As the Son of God fed Elijah, He now feeds us, not with just bread and water, but with His own body and blood in, with and under the bread and wine of His Supper. Here, the forgiveness and all the blessings of Jesus’ cross are given to us personally. With the sin that separated us from God removed, we have the assurance He is always with us. In this way, the Sacrament gives us the strength to go where we need to go for the Lord, to do what we need to do, to walk where we need to walk.

We begin to wrap this up with a story. On May 24, 1965, a 13½ foot boat slipped quietly out of the marina at Falmouth, Massachusetts. It would be the smallest craft ever to make the voyage across the Atlantic Ocean to England. The Tinkerbelle was piloted by Robert Manry, a copy editor for the Cleveland Plain Dealer, who felt that 10 years at the desk was enough boredom for a while. So he took a leave of absence to fulfill his secret dream.

Manry was afraid—not of the ocean, but of all who would try to talk him out of the trip. So he didn’t tell many people what he was going to do. Just some relatives and especially his wife Virginia.
The trip was not pleasant; he spent nights of sleeplessness trying to cross shipping lanes without getting run over and sunk. Weeks at sea caused his food to become tasteless. He got so lonely that he started to hallucinate. His rudder broke 3 times. Storms swept him overboard, and had it not been for the rope he had tied around his waist, he would never have been able to pull himself back on board. Finally, after 78 days alone at sea, he sailed into Fal¬mouth, Cornwall, England.

During those nights, he had wondered about what he would do once he arrived. He expected simply to check into a hotel, eat dinner alone, then the next morning see if, perhaps, the Associated Press might be interested in his story. Was he in for a sur¬prise! Word of his approach had spread far and wide. To his amazement, 300 vessels, with horns blasting, escorted Tinkerbelle into port. And 40,000 people stood screaming and cheering him to shore.

Robert Manry, the copy editor slash dreamer, became an overnight hero. But Robert couldn’t have done it alone. Standing on the dock was his hero, his wife Virginia. She had encour¬aged him on when others would have discouraged him.

The moral to the story? Being alone in this world is difficult. Being alone without Jesus Christ is unbearable! It’s impossible.
This morning, if you are struggling, then I encourage you, to see your Savior. Jesus died for you. He rose again for you. He is here for you. The answer when we are discouraged is always Jesus Christ.