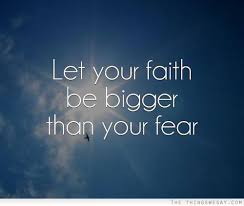 Our text today tells us about a storm and a boat on the rather large Sea of Galilee. I have never been on a boat during a storm. When Erica and I did an Alaskan cruise six years ago there was one day where the boat was rolling around a little. But that was nothing compared to what is in the text. I have been on some airplanes that were bounced around in some weather. Flew over a tornado once in a twelve seat plane. That was fun.

But in the text, Jesus and the guys are in a boat out in a storm. Here is how that happened. Jesus, after preaching, teaching, healing, is ready for a break. Mark tells us: “On that day, when evening had come, [Jesus] said to [the disciples], ‘Let us go across to the other side’ ” (v 35). As I said, Jesus had been teaching all day. He had been teaching using parables to teach his followers. He told one about the seed that grows even though the man doesn’t know how, and the parable of the mustard seed that is small yet becomes big, both of which we discussed last week.

As much as He’d been out in the hot sun all day, teaching and explaining things, He must have been tired. While Jesus is the Son of God, He is also human after all. So, it makes sense that He wants to go across to the other side of the lake and have a break, away from all the people. We know that He cared, we know He wanted to help all those people, but He is in need of some rest. We all know that feeling, right?

“And leaving the crowd, they took [Jesus] with them in the boat, just as he was. And other boats were with him” (v 36). Jesus was in good hands. Four of the twelve were experienced commercial fishermen who knew these waters well. But they also knew that due to some weird geography and climate quirks in that location, storms could brew up in a hurry. Big storms. Dangerous storms.
In verse 37 we read: “…a great windstorm arose, and the waves were breaking into the boat, so that the boat was already filling” (v 37). You know that running into some weather would not have surprised Peter, Andrew, James or John. But I am guessing they were surprised that they could not handle it. Waves breaking into the boat. The boat filling up with water. These days we call that “sinking,” you know.

It is safe to assume that the boys in the boat were bailing with everything they had, but it appears it wasn’t enough. The ship was sinking. The storm was not abating. And Mark says: “But [Jesus] was in the stern, asleep on the cushion. And they woke him and said to him, ‘Teacher, do you not care that we are perishing?’ ” (v 38).

I have always felt bad for Jesus when I read this text. I know what it feels like to be exhausted, and I have been called on to do my duties when I needed to be resting. I am guessing you have experienced this as well, right? Well, the apostles wake up Jesus, and that is bad enough, from the perspective of Jesus. But they also accuse Him of NOT CARING. That had to make Jesus sad, and frustrated, and hurt. Where, in anything you have read about Jesus, have you ever gotten even a hint that Jesus did not care about us? And of course, we also know that the boat would not have sunk with Jesus in it because God’s plan was for Him to go to the cross and die and rise again. We know it was not going to end on that lake.

So Jesus does what He does: “And he awoke and rebuked the wind and said to the sea, ‘Peace! Be still!’ And the wind ceased, and there was a great calm” (v 39). Just like that. Instantly. He speaks, and the sea is calm and there’s no wind. Creation itself obeys Him. And “He said to them, ‘Why are you so afraid? Have you still no faith?’ ” (v 40). He was saying: I’ve taught you about faith in all the parables that I just explained to you. I’ve shown you the power that I have. Yet you still don’t understand who I am? You still don’t believe in me? “And they were filled with great fear and said to one another, ‘Who then is this, that even the wind and the sea obey him?’ ” (v 41).

An uncontrollable storm quickly appeared, and Jesus, with His word, instantly calmed the storm and gave the apostles sudden peace.

This brings us to today. And many of us are acquainted with how the storms of our lives come crashing on us suddenly, without warning. For example: It’s simply a routine check: all the usual tests. You’ve had them done before, and there haven’t been any issues. Sure, there are the usual warnings from the doctor about losing a little weight, exercising more, eating more fruits and vegetables. But there haven’t been any significant problems. No reason for concern. You don’t have any symptoms. You’re just going in for your annual visit. The winds are favorable.

And then you get a phone call after the appointment. There was a spot on one of the x-rays. You haven’t had any problems, but just to be sure, your doctor would like to run a few more tests. A windstorm has just kicked up.

And then another spot is found, and it seems pretty serious. They want to do a biopsy, and the waves get bigger and begin to break into your boat: What does this mean? How bad is it? Is there any treatment? Is there anything you can do? Should you start bailing? Would it do any good, or is it too late? Now, yes, it was caught early. There is a fair chance of success. But that also means there’s a fair chance of failure. The future is unknown, and the storm in your life rages out of your control.

Another common example…Everything in life seemed to be going well. No major problems or disputes or difficulties. You were enjoying life. The winds were favorable. Then you get a phone call. Someone you love is in the hospital. It’s bad. Can you come to the hospital right away? A windstorm has just kicked up.

When you arrive, you find out how bad it is. There’s nothing more they can do. And the waves are breaking into your boat.

A few days pass. The service is over. The luncheon is finished, and all that’s left are a few people cleaning up. You have a bag with some containers of leftovers, so you won’t have to cook for a few days. This is the first moment of solitude you’ve had since this started. From the moment of that first phone call from the hospital, your life and your emotions have been a violent storm, sudden and vicious, raging out of your control. There in your car on the drive home, it first hits you. The storm of activity is now over, but the storm of emotions is just beginning. The storm of death changes everything.

Storms appear suddenly—on the sea and in life. We can’t prevent them from coming, nor can we always respond to them. Our lack of control, and the weakness of our faith, leads to fear.

In those times, in desperate—or even not-so-desperate—situations, turn to Jesus. He will never abandon you. You have been baptized and united to Christ. You are His, and “the Lord will not forsake his people…” (Ps 94:14).

Simply with the word of His mouth, Jesus calms the storms of our souls. We don’t know what the future may hold, but we do know that Jesus says He will always be with us. He says: “And behold, I am with you always, to the end of the age” (Mt 28:20). He is with you forever. He will never abandon you nor forsake you. He will guard you and protect you and watch over you. Therefore, “If God is for us, who can be against us?” (Rom 8:31). God is on your side, and He will give you peace. In the midst of turmoil, He will grant you peace: “If it had not been the Lord who was on our side . . . then the flood would have swept us away, the torrent would have gone over us; then over us would have gone the raging waters. . . . Our help is in the name of the Lord, who made heaven and earth” (Ps 124:1a, 4–5, 8).

In the Inevitable, Uncontrollable Storms of Life, Jesus Speaks and Gives You Sudden Peace. Peace be to you in Jesus’ name.