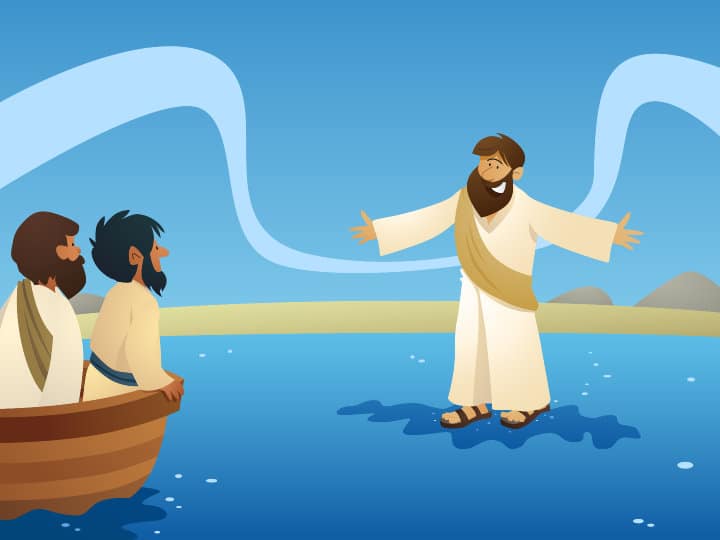 As we read through the Gospels in these days after Pentecost, there are certain moments when we see the disciples do stuff that was kind of dumb. And then we like to give the apostles a hard time. Today’s Gospel is just such an occasion. We were not with the disciples as they journeyed with Jesus, so it’s hard for us to know what they were really going through as they heard the things Jesus said, and saw the things Jesus did. What is recorded for us in the Bible, however, seems to be not all that flattering for the 12 sometimes.
Our critique of the apostles in today’s account centers on how they didn’t know it was Jesus who was walking to them on the water. They seem to have a short-term memory problem, for it was just a few weeks ago when, in Mark 4, we heard that Jesus was sleeping soundly on a cushion in a boat when they were hit by a big storm, and then Jesus stopped the storm. How could they have forgotten so quickly about that event? And today, as Jesus climbs into the boat with them, it says that the disciples were utterly astounded. It kind of seems like they had forgotten what happened in the miracle of the feeding of the five thousand. Why in the world were the disciples afraid, thinking Jesus was a ghost? What was that all about?

Well, like most situations, hindsight is 20/20. We think things should be obvious to the 12 because we already know how everything ends. The disciples were in the middle of things and could only go by what they thought they knew and what they were seeing . . . and they didn’t get it. They did eventually. So put yourself in their shoes for just a minute. Or better yet, look at yourself, for our response to similar life situations is often no different from these disciples: we sometimes fail to see clearly or understand fully.
The Gospel today shows us the strains and pains God’s people were experiencing, both the disciples and the crowds on the shore of the Sea of Galilee. As the disciples were on the sea, the text says, they were making headway painfully, straining against the heavy winds. Make no mistake about it: this was not just a little inconvenience for them; this was hard work. It was late, they were tired, and there was a real fear on their part that they might not make it across safely. These disciples are getting nowhere fast, and it was a strain, and a pain, to make any headway at all.

Then they see Jesus walking on the water to them. And their first reaction is to think that Jesus was a ghost. Now this is where I must step out of this sermon for a moment and tell you that the Jews 2000 years ago, and the folks in the Old Testament, were very superstitious. This is one example, there are others. King Saul went to a medium, a psychic if you will, to talk to Samuel even though Samuel was dead. (If you have a Ouija board, throw it out!) King Mannaseh offered his kid as a burnt offering. The 12 also thought Jesus was a ghost again the first time He revealed Himself to them on Easter, and they thought He was a ghost until He ate something. And, I have to add, it bugs me that 2000 years later, many Christians are superstitious, too. According to a 2009 poll, 23% of Christians read horoscopes and believed in astrology. Other polls say 25% of church-goers are superstitious.

And I have to tell you, as Christians, we SHOULD NOT BE superstitious.

Some examples: The Number 13. Eighty per cent of high-rise buildings have no “13th” floor. Hospitals and hotels regularly have no room number 13. And there is no 13th row of seats on major airlines. I know someone (a Christian) who will not go to work on a Friday the 13. Why is 13 bad luck? Some say because Judas was the 13 person to sit at the table of the Lord’s Supper. (The Bible doesn’t say that.) in Norse mythology, in a well-known tale, 12 gods were invited to dine at Valhalla, a magnificent banquet hall in Asgard, the city of the gods. Loki, the god of strife and evil, crashed the party, raising the number of attendees to 13. The other gods tried to kick Loki out, and in the struggle that ensued, Balder, the favorite among them, was killed.

Some other common superstitions are:

• Walking Under a Ladder.
This superstition originates 5,000 years ago in ancient Egypt. A ladder leaning against a wall forms a triangle, and Egyptians regarded this shape as sacred (as exhibited, for example, by their pyramids). To them, triangles represented the gods, and to pass through a triangle was to desecrate them.
Centuries later, Christians interpreted this in light of Christ’s death. Because a ladder had rested against the cross, it became a symbol of wickedness, betrayal, and death. Walking under a ladder risked misfortune. In England in the 1600s, criminals were forced to walk under a ladder on their way to the gallows.

Ever hear someone say, “Knock on Wood?” People use this expression to avoid “tempting fate” after saying something positive. For example, suppose someone who’s been sick is asked how they are feeling. If they respond, “I’m better now,” they should immediately add, “Knock on Wood.” Otherwise, they might start getting sick again.

The Origin? Pagan religions (Druids) believed that all living things, including trees, had their own spirit. When a tree was cut down, the “tree spirit” would die and evil spirits would take up residence inside the wood. These evil spirits would devise ways of ruining the plans and hopes of people in the area. But, if someone knocked on the wood, it would drive the evil spirits away and prevent misfortune from occurring.

I could go on, but let me just say that if you’re are going to believe something, believe the Word of God!
Speaking of which, back in the Word, Jesus got in the boat and the boys figured out He was not a ghost. With Jesus’ help, the disciples got to land on the other side of the lake, where Jesus encountered the second group of people today. People who wanted to see Jesus, or bring someone else to Jesus, noticed He was now on their side. Our Lord’s fame had spread throughout the region, so when people recognized Him, they brought to Him their friends and relatives who were sick. For those folks back then, there was only one thing that could help as they experienced the strains and pains of life: the presence of Jesus.

It’s the presence of Jesus that helps us today as we go through our strains and pains. There are moments where the wind picks up on us: we get in a fight with someone we love, our job becomes a burden or we lose the job, the joys of homeownership overwhelm us, or someone in your house is in a car accident or something. Like the disciples, we find that the days become long and we’re tired; we’re lonely. It can sometimes feel like making headway in our lives is hard, or painful.
As people of God, our faith knows where we can turn for help in these times, but as people who sin, we often don’t do it. When life becomes work, when hardships hit us, when suffering enters our world, we have a tendency to doubt or forget God.

In fact, Jesus is not just present with you but has carried the strain and pain of sin for you. He knows the hurts that you experience. He has died for you on the cross and has risen from the grave to give you the eternal gains of forgiveness, life, and salvation.

Jesus said, “Take heart; it is I. Do not be afraid” (Mk 6:50). These are powerfully comforting words from our Savior today, for the strains and pains of life are sure to come, but as a child of God, you know where you can turn for help in your time of need.

Look to Jesus, for He is there. He steps into the boat with you to bring an end to your strains; He brings His healing touch to you for all your pains of body and soul; He has gained for you the kingdom and promises you life with Him eternally. Just as He Promised, Jesus Is Always with Us, Especially in Our Strains and Pains, to Give Us Eternal Gains.