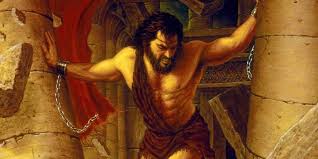 If you pay any attention at all to our popular culture, and it is definitely ok if you do not if you do you have noticed that lots of stuff in the movies, TV, streaming services like Netflix, are all about the superheroes. Stuff like Superman, and Spiderman, and Batman, and Lionman (oh wait, that’s The Lion King), and Iron Man, and Wonder Woman.

When I was a little kid, I went to Sunday School and what I was taught there sounded like superheroes. Moses parted the Red Sea. Elijah went to heaven on the chariot of fire. Jesus rose Lazarus from the dead. And a guy named Samson pulled a whole building down to kill a bunch of Philistines. This morning, we are going to talk about Samson.
In the book “Gory Deaths,” Jonathan Schkade introduces Samson in this way:

“Here he is, history’s first superhero, the man with lengthy locks, a tornadic temper, and more muscles than a seafood buffet. . . . Samson was large and in charge, and frankly, just about unstoppable. Still, for a superhero, he had a lot of flaws. Good thing too, because using flawed people to do great things is one of God’s specialties.”

Now before we proceed here, I do want to point out that the Samson account in Scripture, if it were a movie, would be rated R or TV-MA. If you remember Samson as a guy who killed people with a donkey’s jawbone and had long hair, the Sunday school version of Samson is quite “edited.” I will do what I can here to tell you the whole story, without getting TOO detailed. Ready? Here we go.

The history of Samson begins with chapter 13 in the Book of Judges, where we read that, “…the people of Israel again did what was evil in the sight of the Lord, so the Lord gave them into the hands of the Philistines for 40 years.” After Joshua died, and before the time of the kings, the nation of Israel did this little dance with God. They would disobey. Bad things would happen. They would repent and ask God to help them. God would help them. They would give thanks to God and promise to do right by Him. Things would be good. Then they would break that promise and go back to sinning and rejecting Him. Repeat.

At the time of Samson, Israel was again at this point in the dance where they had rejected God and things were bad. In this case, the Philistines were in charge over Israel. And here we see another couple that could not have a child. There are a lot of those in Scripture. Abraham and Sarah. Elkanah and Hannah. Zachariah and Elizabeth. And in this case, there was a dude named Manoah and his wife (who is not named) who had not had any children. An angel of the Lord came to them and told them they were going to have a son. The angel told her that she was not to drink alcohol while she was pregnant, nor eat anything “unclean,” because God had something special in mind for this child. The angel told the mom that when the child was born, he was never to have his haircut, he was never to drink alcohol, or touch a dead body, that would make him unclean. This was known as a Nazarite vow, and the only two people who did this in Scripture for their whole lives were Samuel in the Old Testament, and John the Baptist in the New. Manoah and his wife did in fact conceive, and they named the boy Samson, and he grew, and the Lord blessed him.

Then we move along to when Samson is a grown man, and he decided that he wanted to get married. Sounds ok, right? Except he wanted to marry a Philistine girl. Here we have a young man who is supposed to be living the Nazarite code, being separated and dedicated to God, and he wants to marry a pagan girl. While going to meet her, he killed a lion with his bare hands. Later, he went by the lion’s corpse and saw bees had made a honeycomb in it. He ate some, which violated his Nazarite vow of not touching dead things. We will see he breaks these vows a lot. At the wedding, he told a riddle the Philistines could only answer by cheating, and when they cheated, Samson killed 30 Philistines to loot the bodies to pay his “riddle debt.” (30 sets of clothes) And when he returned to Israel, the father of the bride gave her to the guy who was Samson’s best man.

Samson’s next adventure was to go back and get her. When he realized she had been given away, he set fire to their fields (300 foxes) and burned all their crops. When they tried to retaliate, Samson took the jawbone of a donkey and killed 1,000 Philistine soldiers.

After that, Samson went to visit a prostitute in Gaza. (Remember, he is a Nazirite, dedicated to God. He’s not very Nazirite if you know what I mean. I told you he liked to break his vows.) The Philistines tried to ambush him there, but he eluded them, he grabbed the gate to the walls of the city, pulled the whole thing out (doors, posts) of the ground, and planted it on a nearby hill to show them he was boss.
And that brings us to Delilah. Samson and Delilah. The Bible simply says that “Samson loved a woman in the valley of Sorek, whose name was Delilah.” And the leaders there asked her to trick Samson into revealing what was the source of his strength. Three times she tried to get him to tell her, three times he lied, three times a Philistine ambush failed.

Jonathan Schkade says this about Delilah (p. 79):
If you tell someone you are dating that you are deathly allergic to bees, and wake up to find a couple of beehives outside and a beekeeper suit hanging in the closet, you might want to rethink your relationship.”
Now I don’t know about you, but I think I would break up with a woman if she tried to kill me three times.

She asked him again, and he told her the truth. And this shows how arrogant Samson had become. He had been told all his life his strength was because of his hair, and his God. But he is thinking here that he is strong because of his own doing, and not because of God’s blessings. The Philistines cut his hair, his strength was gone, they tied him up, gouged out his eyes, and put him in prison. Sometime later, they put him on display at a big party they had to celebrate the defeat of old Samson. They also gave thanks to their god Dagon for the victory. (Dagon was half man, half fish if you are wondering.) And if you don’t know the ending, Samson asked God for the strength to bring the building down where this was going on. He did. And Samson destroyed the building, which resulted in the death of Samson and more Philistines, more than Samson had killed previously combined.

Now one of the things this is telling us is that when we have a talent, an ability, it is easy for us to think that is our ability and we have it because we are wonderful. But the reality is, like Samson’s strength, our abilities come from God. Whether you are good at selling, or building, or cooking, or talking in front of groups of people, or whatever talents you have (and we all have some), these talents come from God. Now we can hone them, and practice and get better, but our talents come from God. And that is something we need to remember.

And the other big thing I think Samson tells us is that it is kind of amazing that God could look at a dude like Samson, who was impulsive, and rude, and kind of full of himself, and God took this guy and made him the leader of Israel. And God looks at us, with all of our sins and our faults and our problems, and He picked us to be loved, saved, and to do His mission, which we talked about last week. God picked us to be saved by the death on the cross and the resurrection of Jesus. God picked us to be loved and saved and given faith, forgiveness, and eternal life. God loves imperfect people like us. God uses imperfect people like us to carry on His work and show His love and share His Word.

Now we began today by talking about superheroes. And I am not one to think that I qualify as a superhero as a guy who can talk, play guitar and run 8 miles. That doesn’t qualify. But when we think about what Jesus did for us and gave to us, well, obviously He is Super. And He is our Hero. Go in peace, with that thought today.