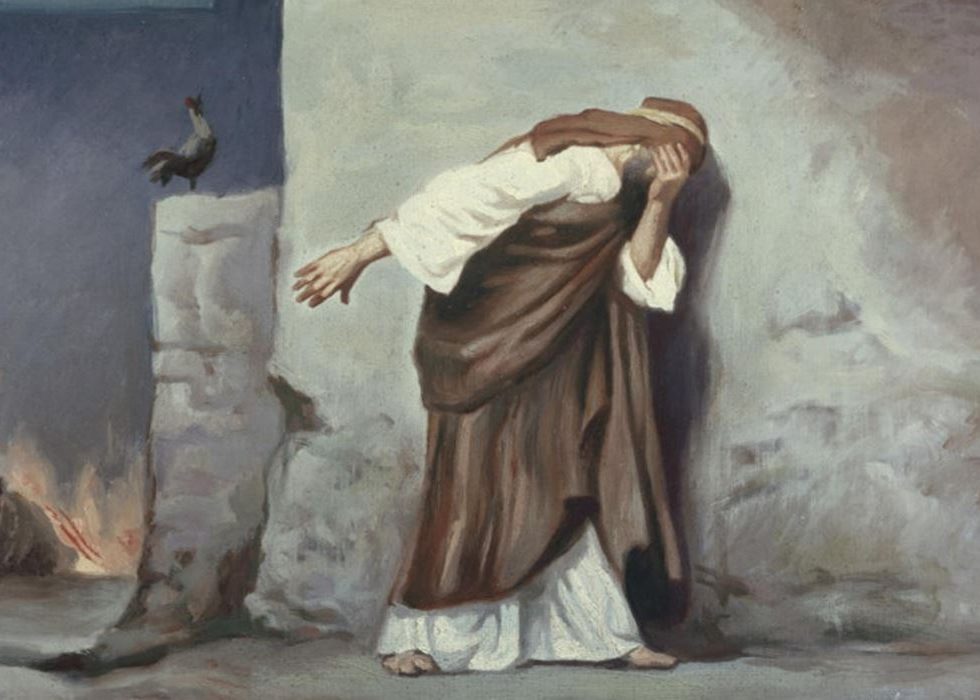 “Bet you can’t eat just one.” Do you remember that advertising slogan from Lays potato chips? Lays was convinced you’d find their potato chips so delicious, you’d just keep popping them into your mouth.

I can’t think of a better illustration of sin. Not that eating potato chips is necessarily sinful, but that one sin is never enough. Sin always comes in clusters. That’s the way it is for you and me, isn’t it? Suppose you shoplift; how many laws of God do you break? You break the First Commandment: you shall have no other gods. Whatever you steal becomes your god. You break the Fourth Commandment: honoring your parents. They’re certainly not honored when a child steals. You break the Seventh Commandment, stealing: the obvious one. You break the Eighth Commandment, bearing false witness: you’re saying something is yours when it isn’t. And you had to break the Tenth Commandment: coveting. Get the point? You can’t break just one. We’re all serial sinners. And Serial Sin Leads to Repeated Tearful Moments, in Which Only Jesus Can Bring Comfort.

That’s the experience of Peter, a guy we remember who had a bad Maundy Thursday. I find at least three tearful moments in the story of Peter’s denial of Jesus.

The first tearful moment in his story is Jesus saying to Peter that he would deny Jesus three times that very night. “I tell you, Peter, the rooster will not crow this day, until you deny three times that you know me” (Lk 22:34). Of course, Peter protests. We would too. Peter said, “Lord, I am ready to go with you both to prison and to death” (v 33), maybe pulling his sword out and waving it around for emphasis. “Even if I must die with you, I will not deny you!” (Mt 26:35). The other disciples say the same thing.

This is a sad moment, wouldn’t you agree? Grown men, supposedly faithful disciples, embarrassing themselves and doubling their guilt by saying they’d never deny Jesus, but would rather die with Him than disown Him. Spoiler alert…when Jesus is in the garden getting arrested, they ran away. At this point, we’d like to distance ourselves from them, maybe give them a bit of sympathy, some pity, but not identify with them. But we’d be kidding ourselves. We’re just like them.

What Peter and his friends did happens every time someone gets baptized, confirmed, or joins a congregation. In Baptism, we renounce the devil and all his ways. In confirmation, we promise we’d rather die than fall away from Christ. When we become members of the congregation, we promise to be faithful to Word and Sacrament and give of our time, talent, and treasure to support the work of our church. And we don’t keep our word, either.

Jesus is right there beside us when we make all these promises, listening, maybe with a tear in His eye, because He knows not a single one of us will keep them perfectly. Every promise we make becomes a pitiful lie that ought to move us to tears when we think about what we’ve done.

I wonder if Jesus felt like crying when He heard Peter and the others swear never to deny Him but rather to die with Him. Surely there was some emotional reaction. I don’t think of Jesus as having a poker face.

But He’s also the Savior. He didn’t come to humiliate us by rubbing in our guilt. He came to take it away and bring us forgiveness. This sad moment in the Upper Room is just one more indication of how much we need Jesus to do what He’s come for, to die for our sins.

Peter’s second sad moment comes when he fulfills Jesus’ prediction. Peter is one of three disciples at the trials of Jesus. Yes, we usually think of them all running away when the mob comes to arrest Jesus, but they don’t all stay away. There were apostles at Jesus’ first “trial.” Judas, of course, has switched sides. He’s joined the enemy. And John is there. Somehow he’s acquainted with the high priest and seems to have no fear of harm to himself (Jn 18:15). He goes with the mob to the high priest’s house, where they let him in so he can watch the proceedings. He’s the only disciple who stays nearby right up to the moment of Jesus’ death on the cross.

Because John is there, so is Peter. Bragging, spontaneous, loudmouthed Peter, who says he will never deny Jesus but will even go to prison and die with Him. John is Peter’s ticket inside. John sends word for a servant girl to open the gate (Jn 18:16). Peter enters.

Seeing a fire, he sits down beside it, warming himself against the night chill, not realizing it illuminates his face. The servant girl looks at him. “This man was with him,” she says. “You also were with Jesus of Galilee.” “Woman, I don’t know him,” Peter replies. “In fact, I don’t even know what you’re saying.” He’s playing dumb.

The trial continues into the early morning hours. More and more people in the courtyard are checking Peter out. “Truly, you’re one of them. You’re a Galilean; your speech betrays you,” says one, and then another. Peter says, “Nope.” An eyewitness adds his voice. He’s a relative/cousin of the man whose ear Peter cut off. “Didn’t I see you in the garden with him?” In other words, “I was there; I saw what you did to my cousin.” Now Peter is swearing and calling down curses on himself, “I don’t know what you’re talking about,” he shouts.

The rooster crows. Jesus turns and looks directly at Peter. Peter remembers what Jesus had said to him, “Before the rooster crows today, you will deny three times that you know me.” Peters runs out and has himself a bad cry. He wails in agony. He howls with the spiritual and emotional pain of his guilt.

Don’t you find it ironic that Jesus is on trial, but the only one found guilty here is Peter? In Jewish tradition, it took two witnesses to establish a charge in court; three or four witnesses were even better. They couldn’t even agree on the charge against Jesus, let alone find witnesses who could agree on their testimony. But here we have a clear charge against Peter made by Jesus, “Before the rooster crows today, you will deny three times that you know me.” There’s no escaping it; Peter is guilty as charged. He runs, perhaps trying to outrun his guilt. What a sad moment for Peter.

But Peter’s tearful moment will not be the end of the story. Peter has failed to remember the rest of Jesus’ prediction: a promise of restoration. I didn’t read it before, but I will now. Jesus spoke these additional words (before the text) at the Lord’s Supper: “Simon, Simon, behold, Satan demanded to have you, that he might sift you like wheat, but I have prayed for you that your faith may not fail. And when you have turned again, strengthen your brothers” (Lk 22:31–32). Peter’s behavior will be shameful. But it is not Peter’s behavior that will save him. It is faith.

Yes, that’s a tearful moment for Peter, but it’s made even more tearful because he’s forgotten the Gospel words of his Savior. “I have prayed for you,” Jesus has said, “that your faith may not fail” (Lk 22:32). Faith is God’s gift to him, a gift that enables him to embrace Jesus as the Christ, God’s Son, the Savior of sinners, a gift Christ will restore. This Jesus is the one who died and rose for Peter and for us. Faith remains God’s gift to Peter, despite the failure of his behavior. For this we can be deeply thankful, because our behavior so often fails while faith yet remains.

Peter hasn’t been faithful. But such a person is exactly who the Gospel is for—unfaithful people who are forgiven and restored through faith in Jesus, faith that is a gift, faith that trusts Christ and not yourself. Eventually Peter remembers these promises. Eventually he experiences the joy of sins forgiven and tears wiped away. Eventually he goes back to work for His Savior, strengthening his brothers.

As can you and I, no matter how far we’ve fallen, through the gift of faith. No matter how much we deny Him, our Lord is still faithful to us.

That’s Peter’s experience. May it be ours as well.