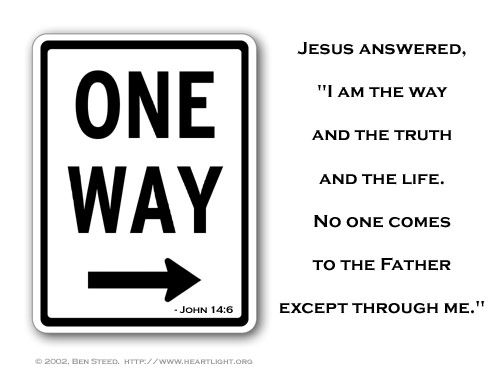 “Recalculating.” With one word, I have all of you thinking about the exact same thing. GPS. That’s hard to do. If I say fish, you aren’t all going to think about Timmer’s Bay Side Inn on Big Cedar Lake in Wisconsin, even though they have the best Friday Night Fish Fry in the world. If I say “Trump,” most of you may think something of our current U.S. President, but some of you will think of cards…bridge, spades, sheepshead. I mean, even if I say “Sooners,” half of you are going to be thinking, “No…Cowboys!”

In the Gospel reading for today, words with which you probably have some familiarity, Jesus tells us that for one very important destination, there is only one way to get there. Today we hear Jesus’ words, “I am the way. . . . No one comes to the Father except through me” (v 6). He’s very clear: Jesus Is the One and Only Way to Heaven.

When it comes to faith and spiritual matters, it works that way out there too. Millions of people out there think there is no one religion that is best, no one religion that has the monopoly on the TRUTH. That all religions are equal, that all of them in some way, fashion, or form, will get you where you want to go. This idea is wrong. Now you will get into trouble in some circles if you say that our there, or on Facebook. But I am not here to tell you what you want to hear. I am not here to say what the PC police and the social justice warriors want me to say. I am not here to say what is in style, in vogue or in fashion these days. I am here to tell you THE TRUTH. I am here to tell you what God says, what His Word says. And on this issue, Jesus is very clear.

On Maundy Thursday night, Jesus was in the Communion Room with the 12 apostles. He has told Peter he will deny Jesus 3 times that night. He has announced one of the 12 will betray Him. And at the beginning of our text, He tells them (and us) that Jesus, as part of His mission, that Jesus has prepared a place for us with Him in Heaven., and that He is going to take us there. Sounds good, right?

Jesus then says, “And dudes, you know the way to where I am going, right?” Good old Thomas looks at Jesus and says, “Uh Jesus, we don’t know where you are going and we do not know the way.” I can just picture Jesus here, doing something along the lines of a “Huh” and a shake of the head (“Will these guys ever get it?”), but then He says, “I am the way, and the truth and the life. No one comes to the Father except through me.”

For all the Sincerists out there (You know what I am doing with that, right? All religions are equal, as long as you are sincere you will get what you want.), they don’t like this. But please note a couple of things here. Please note that when Jesus said what He said, He did not say “I am A way.” He did not say, “I am ONE OF THE Ways.” He said, “I am THE way.”

But Jesus says, “I am THE way.” He does the work. He does the verbs. He does the saving. And unlike Mohammed and Buddha and Confucius, Jesus didn’t just die, but He rose again! I would argue here today that that is different. That is not the same.

Of course, when we point that out people out there will still say, “BUT…” And here people say that this teaching is “unfair,” it is too “exclusive,” it is too “harsh” or too “intolerant.” Here is another way we can try and make our point and get their attention.

Ken Klass, in a sermon he gave a few years ago, reminded us that around 9:00 a.m., on September 11, 2001, an airplane – United Airlines Flight 175 – flew into the south tower of New York’s World Trade Center. You remember that day. You know what happened. Something you may not know is that almost everyone on or below the 77th floor of that building escaped; almost everyone above the 77th floor died. For those above the 77th floor, 595 people died and only four managed to live. The first of the four was Brian Clark. Brian was Executive Vice-President for Euro Brokers. When part of the jet hit his floor the tower twisted, air-conditioning ducts fell and floors buckled. Clark, and seven other men, started to go down Stairwell A.

On the 81st floor, they met a large woman and a frail man trying to make their way up to the roof. The woman told them, “You can’t go down. The floors are in flames.” The men debated: up or down. Six of the men who were with Clark decided to go up, two of them helping the woman manage the stairs. Clark and a co-worker, Ronald DiFrancesco, heard some banging and pulled Stanley Prainath out of the rubble. Clark and Prainath went down, and exited the building four minutes before it collapsed. DiFrancesco had second thoughts about the direction they were going. It was getting too smoky. He was having a hard time breathing, so he had turned around and climbed all the way back up to the 91st floor. For ten minutes Ron lay on the landing to rest. Then, moved by a desire to see his wife and children, Ron got up, turned around and started down Stairwell A again. This time Ron made it past the smoke; this time he made it all the way down to the lobby. As Ron left the building, a fireball rolled toward him; he put his arms in front of his face. That was all he remembered until he woke up three days later at St. Vincent’s hospital. Ron was the last person to make it out of the South Tower. These three, along with one other who also made it down Stairwell A were the only people who survived above the 77th floor of the Trade Center’s South Tower.

Let’s wrap up with this. I read on the Internet last week that there was a story making the rounds in the media about the husband and wife who found they were unable to have children without assistance. Not wishing to give up on having children, they went to a fertility clinic, did the testing thing, and waited. The news they got was not what they thought they would hear. The couple was told they were, in fact, fraternal twins. This is the rest of the “story”: their biological parents died in an auto accident when they were young. The twins were split up and adopted into different families. Unfortunately, those families were never told there was a twin somewhere out there. In ignorance the twins grew up, and attended college where they met, dated, and married. Quite a story, right?

Why did I bring this up? Because all of us are able to believe a good lie. And if there is one thing the devil (the “Liar in Chief”) does well it is this: he makes his lies seem like the truth. And so people believe his lies:

• It doesn’t make a difference if you go to church; the place is filled with hypocrites.
• It doesn’t matter what you believe as long as you are sincere.
• All religions are the same and they all lead to the same god.

These are all lies. The truth is there is one God, the Triune God, and the Son of God died and rose again for your sins. And this Jesus is THE WAY, THE TRUTH, AND THE LIFE. Jesus, the crucified and risen Son of God, our Savior, is the ONLY way to heaven.