“Listen to What God Says”

“Listen to What God Says” 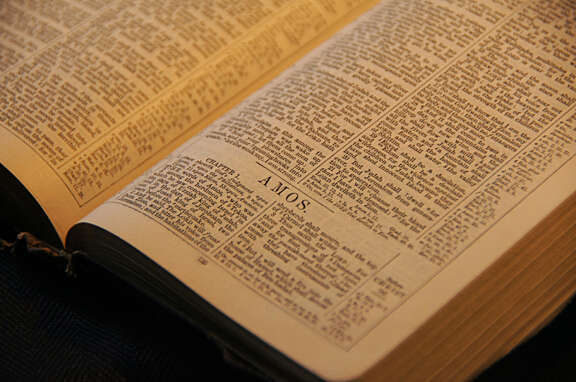 In a much more serious matter, you should know your ultimate enemy: Satan, the devil. What are the aims and goals of the devil, the “ruler of this world” (Jn 12:31; 14:30; 16:11)? What is his agenda? What are his strategies, his tactics? You need to know your enemy.

Well, certainly the devil wants to see all kinds of violence and evil. The more of that, the happier he is. When you get your news, from whatever device you use, you can see pretty quickly that the devil is REALLY happy these days. But what he really wants to do is generate unbelief. He wants to keep unbelievers in unbelief, dead in their sins. He wants to lure and draw believers away from their Lord and Savior, away from faith to unbelief.

Well, how does he do that? We see his tactics recorded in the Bible. One approach is to dump on us a bunch of false voices in an effort to drown out the true voice of God. Throughout the history of ancient Israel, we read about a lot of false prophets. In fact, they usually outnumbered the true prophets. The false prophets would tell sinners what they wanted to hear, and as a result, they were popular.

Another common approach is to silence the people who actually teach God’s saving Word. Just silence them. We are told that the prophet Isaiah was executed by being sawn in half. Ouch. The apostle Paul was beheaded. Peter was crucified upside down. Additionally, very often the prophets and apostles were pursued and imprisoned. Elijah was constantly threatened. The prophet Jeremiah as well as Paul often found themselves in prison. But God has the last laugh. The writings of the prophets and apostles were preserved, and we can hear and study them to this day. God will not be silenced.

But as I said, the devil wants to prevent you from hearing the true Word of God. One example of this is recorded in our text, Amos 7. Let’s travel back to the year 760 BC. The place is Bethel, about ten miles north of Jerusalem. When Solomon died, the northern ten tribes separated. The north “seceded from the union” you might say. But God had made ancient Israel His very own covenant people, and that included those ten northern tribes as well. So God brought prophets like Elijah and Elisha to proclaim His Word to the people. And He summoned Amos and sent Him to do the same.

Amos was there in Bethel, where bunches of people had gathered to worship. Instead of worshiping at the temple in Jerusalem, where they were supposed to go, the north set up its own places to worship. One was located at Dan in the far north and the other at Bethel, in the southern end of the Northern Kingdom. (They didn’t worship GOD there, either.) Amos was called and sent by the real God to proclaim what the real God had to say. Therefore, Amos would repeatedly say things like, “Thus spoke Yahweh, the God of Israel” or “Thus says the Lord.” The true God wanted His Word to be proclaimed to the people, and through that Word, the Holy Spirit works. Therefore, Amos kept saying, “Listen to What the Lord God Almighty Has to Say.”

But those in charge of worshiping at Bethel did not want to hear it. Amaziah, the priest at Bethel, complained about Amos to the king in Samaria. Notice how Amaziah did some spin-doctoring. Amos was announcing God’s words of judgment against rebellious Israel, but Amaziah saw it as a conspiracy by Amos: “Amos has conspired against you [being the King Jeroboam II]” (v 10). Amaziah painted Amos as some kind of political revolutionary. Amaziah said that the words from Amos were not from God, but were more about Amos personal ambitions. Amaziah reported to King Jeroboam II, “For thus Amos has said.” Amos had been emphasizing, “Thus is what the God of Israel says,” but Amaziah said it was that Amos was just saying Amos words.

Like I said before, the devil tries to prevent sinners from hearing the life-giving Word of God. This is one way he does it, by leading people to discount it, trivialize it, ignore it, dismiss it as simply human speech and human opinion. Amos said, “This is what God says,” and the opponents say, “No, that’s only what you say, preacher man.” “Don’t impose your religion on me,” they say. “Keep your religion to yourself.”

So how about you? Do you want to hear the Word of God? Or do you find ways to discount and ignore it? Do you dismiss it as irrelevant and boring? Do you have more important things to do with your time? Your life is busy, swamped with daily duties and activities. And so many voices are vying for your attention—on TV, the computer, digital devices, over the radio. Because we are bombarded with so many voices, the danger faces all of us to listen only to ourselves.

Know your enemy. Your ultimate enemy, the enemy, the devil, wants to prevent you from hearing the life-giving Word of God himself. The enemy wants sinners to listen only to themselves. brought

Here’s the Good News today: The Word of God shall remain. God will not be silenced. God is the God who speaks. He does not hide Himself in secrecy so that we only get access to Him by sorcery, or astrology, or by figuring out some secret code. The true God, the almighty Creator, speaks. We see that throughout the Scriptures, beginning in Genesis 1. The true God speaks in human language so that He can be heard and understood. The true God is not deceitful but open and transparent. The true God is a straight shooter.

The true God, the Creator of all, the God of ancient Israel, wants His Word to be preached, proclaimed, spoken, and written. Why? Because through His Word, the Holy Spirit leads sinners to repentance. That was why God called Amos. So that Israel would turn away from their evil and turn to the Lord, the true God. God’s Word of judgment and repentance leads sinners away from their idols and their crooked ways.
Why does God go to such a bother to have His Word proclaimed? Because through the promises of God, the Holy Spirit creates and sustains faith. Those are the promises to actually listen to, take to heart, believe, and trust in. They are true promises given by the Lord God Almighty Himself. Listen to What the Lord God Almighty Has to Say.

Now the Holy Spirit is still at work through God’s Word. Through the Word of Law and judgment, the same God still calls us daily. He still calls us all to repent, to confess the sin of listening only to ourselves and hearing only what we want to hear. Through the Word of promise, fulfilled in Jesus, He creates and sustains faith and changes our lives, because His Word tells us Jesus came, and died, and rose for us. Through Holy Baptism, Jesus puts His name on us. We belong to Him. Through His Supper, received by us, He unites us with His life-giving body and blood. Moreover, He promises that one day, we, as His people, will inherit the new and greater promised land, the new heaven and the new earth.