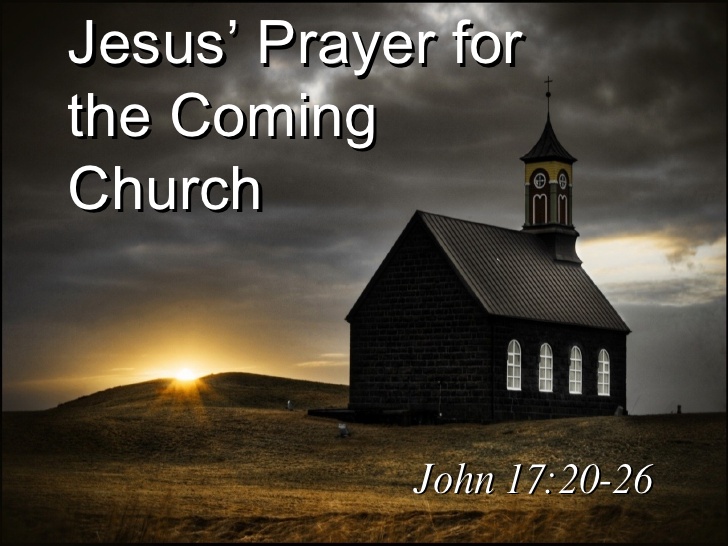 There are those times in a play, or in a movie, or TV show, when a character steps forward and speaks directly to the audience. I believe some of you are familiar with the movie “Ferris Bueller’s Day Off.” Ferris (Matthew Broderick) talked right to us in that movie. In “House of Cards” on Netflix, Kevin Spacey (as Frank Underwood) does that, too. This invites the audience to lean in closer to hear what could be crucial information. Wouldn’t it be cool if God stepped right up here and spoke like that?
In the Gospel of John, there is an extended speech, a sermon if you will, that Jesus speaks right before He is betrayed and eventually crucified. On Maundy Thursday night, after instituting His Supper and before His arrest, Jesus encourages the disciples to love one another, warns them of persecution to come, and promises them the Holy Spirit and a place He will go to prepare for them.
But the climax to the sermon comes right at the end and is found in our Gospel text today. Jesus has been praying for His disciples, but in 17:20, he “looks into the camera” and lets us listen in on a prayer for us. So let’s take a look at Jesus’ Soliloquy as He Asks God for the Last Things Jesus Wants for Us.

We are wrapping up the Easter season, celebrating the resurrection—Jesus’ victory over death. Today I kind of want to summarize our Easter celebration for this year. We will consider our text in three ways: We are won, to be one, and to win. So how do we start? Jesus won. He won the battle, the war, the game against Satan. His victory is also ours. He was crucified for our sins, then raised again as the promise of our resurrection to eternal life. The devil, sin, and the world are defeated. We have forgiveness of sins. We are not doomed to hell. Heaven is ours. We stand pardoned in Jesus. Our name is written in the Lamb’s Book of Life. We are numbered among the saints. We are won. Jesus won for us.

We will still die, but the sting of death is gone. We still struggle with our flesh, sin, and the devil, but the outcome is already decided. It is no surprise—Jesus won, and we win with Him. Paul confidently states (Rom 8:35–39):

“Who shall separate us from the love of Christ? Shall trouble or hardship or persecution or famine or nakedness or danger or sword? . . . No, in all these things we are more than conquerors through him who loved us. For I am convinced that neither death nor life, neither angels nor demons . . . neither height nor depth, nor anything else in all creation, will be able to separate us from the love of God that is in Christ Jesus our Lord.”

Jesus won; therefore we won. We have been won to be one.

This brings us to part two of your sermon…We have been won, w-o-n, to be one, o-n-e. There are two aspects of being one. The first aspect is this: through Jesus we are now reconciled to God; nothing stands between God and us. Once we were enemies of God, but now Jesus has brought us into God’s family. Once we were separated from God and headed for hell, but now Jesus has united us with our Father, and we are headed toward heaven. Jesus stresses this in His prayer (Jn 17:21–23):

This oneness is done by God. Just as God the Father is one with His Son, Jesus, we are made one with the Father and the Son when the Holy Spirit brings us faith in Jesus. We are part of His body, inseparable from Him. We cannot create this oneness. God comes to us in Christ. He opens our hearts and establishes His covenant with us.

The second aspect is that all Christians are one with each other. Again, this is stressed in Jesus’ prayer. “…that they may become perfectly one…” (Jn 17:23). This is also something given. All who believe in Jesus as their Savior are members of the one body of Christ, and are attached to each other. Paul put it this way (Eph 4:3–6):

“Make every effort to keep the unity of the Spirit through the bond of peace. There is one body and one Spirit—just as you were called to one hope when you were called—one Lord, one faith, one baptism; one God and Father of all, who is over all and through all and in all.”

Holy Communion is the celebration of the forgiveness of sins and the union with Christ—we receive His body and blood. Furthermore, it is a celebration of our oneness with each other. We read in 1 Cor 10:16–17:

This oneness is with all who believe in Jesus as their Savior, wherever they live and wherever they worship. While we acknowledge and recognize that there are, like, 25,000-40,000 different Christian Denominations in the world, we are one with each other. Everyone who is saved by Jesus, who has received the salvation that Jesus gives, is in the one holy, catholic and apostolic church. We are all one, and we all have the same mission.

This leads us to part three: We are one to win. Why were we won? Why are we one? Listen to the words of Jesus in His prayer (Jn 17: 20–21):
20 “I do not ask for these only, but also for those who will believe in me through their word, 21 that they may all be one, just as you, Father, are in me, and I in you, that they also may be in us, so that the world may believe that you have sent me.

In other words, we have a mission: “Therefore go and make disciples” (Mt 28:19). Won to be one to win is our ministry. How? In the Great Commission, Jesus said we make disciples by baptizing and teaching. He said we are His witnesses (Acts 1:8) to tell what we have “seen and heard.” We need to share what we know. We want everyone to be saved. We don’t want to keep this to ourselves.

There is an old story that is told about how years ago, a small country church was looking for a new pastor. After some significant searching, they managed to get the list down to two possible candidates. Each of these men was requested to present an “audition” sermon to the congregation. That’s how it came to pass that on two consecutive Sundays, the potential pastors found themselves preaching to a very attentive audience. The first pastor preached on hell. The second pastor preached on hell, as well. When it came time for the congregation to make its selection, the vote for the pastor they chose was a unanimous, first-ballot decision.

After he was installed, the new pastor found out that both of the nominees had used hell as their topic. Understandably curious, he asked one of the congregation’s leaders why the church had picked him. The leader didn’t have to think long before he gave his answer. He said, “When the other pastor preached on people going to hell, he seemed to be almost satisfied that they were getting what they deserved. When you preached about folks going to hell, everybody saw that it just about broke your heart.”

Do we pray for our ministries? Do we consider ourselves as answers to the prayers of others who pray for help and for people to tell them about Jesus? Are we willing to say to our Lord, “Use me as you will,” or do we just want to volunteer when it is convenient for us?

Jesus sacrificed and gave Himself. Jesus won the war against the devil so we could be His. He made us all one with Him and one another, One Holy Church. And now we have been blessed to go out there and share what we have, so the devil’s total body count in hell goes down.

It’s no secret that I like football, and ten days ago the NFL had its draft, where each team added several rookie players to their team. I mention this because God has won the game vs. Satan because His Son Jesus died and rose for us. The game is over, God won, even though there is still some time on the clock and the devil is still on the field. Because Jesus has done all this for us and given us our faith, forgiveness and eternal life, we are now on His team, we are one, right? And now God is asking us to help with adding people to His team. We are to help “draft” folks onto the Jesus team. He is reminding us today that HE IS RISEN! (He is risen indeed!) Let’s tell that to whomever needs to know it.