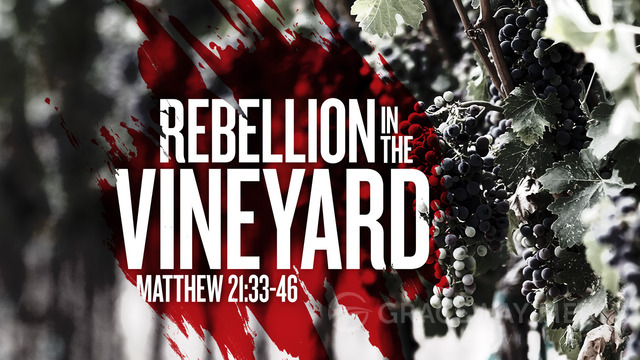 Have you ever been a tenant? Have you ever rented the place where you live? I am guessing that most of us have rented a house or apartment at some point in our lives. The first apartment I had was in college. It was a little one-room studio place. My dad didn’t want me to leave the dorms (I did dorms for 4 years in college) but I was sure I could live cheaper in an apartment NOT paying for dorm food. Turned out I was right. The second apartment I had was when I moved to Midland, Texas for my first, full-time radio job. That apartment had three rooms, which sounds like an improvement at first until I tell you that one of the rooms was just for the cockroaches. And the rats. Now there are other things that can be rented, as well, from Videos to cars. The reason I bring this up is that Jesus tells a parable in today’s Gospel about some guys who were renting a vineyard. There is a lot of good symbolism here which we will discuss this morning as we take a look at ourselves, as “Jesus’ Renters.”

Allow me to set the context here for this morning’s Gospel lesson. Jesus and the 12 are in Jerusalem. It is Holy Week. Jesus has gone to the temple and the chief priests and the elders are challenging Jesus and looking for a way to get rid of him. While in the temple, Jesus was teaching in parables, and in today’s Gospel text He told the parable we have for today, the parable of the tenants.

The parable begins with a landowner who planted a vineyard. After he had set up the vineyard the way he wanted it, with a place to smash the grapes to make wine, and a wall to keep out thieves, and a tower for a place to guard against, and a place for the workers to sleep, he then rented it out. That was a common thing for folks to do in those days. There were not many folks 2000 years ago who had enough money to own land. Of those that did, they owned a lot of places. So, they would live somewhere else, rent out their farms to locals, and expect them to work the land and give them the product. When the harvest time came in this parable, the owner sent some of his servants to collect the fruit, but the renters took the servants, beat one, stoned one, and killed a third. The folks in this parable are not what we would call “model tenants.” I think it unlikely that they were going to get their security deposit back. The landowner did not punish them, though, he just sent more servants who were treated in the same, rude way. After this, the landowner got an idea. He said to himself, “I know, if I send my son, they will respect him.” But the tenants did not respect him, they murdered him, thinking that they would take the heir of the land out of the picture. It was a Jewish law that at the death of a landowner with no heir, the land went to the tenants.

After telling this story, Jesus then asked the chief priests and those there in the temple with them, “What do you suppose the landowner would do in this situation?” Their response was that he would probably come in and drop a MOAB (Massive Ordnance Air Blast) on them, and find some new tenants. The irony of this is that unknown to them, they were foreshadowing what they would do to Jesus, and what God would do to them.

You see, one way to break down this parable is to see that the Vineyard represents God’s children, the owner is God, and the tenants are the Pharisees and the priests (the folks who work in the temple and lead the Jews spiritually). Jesus, in this parable, was doing a little prophecy. God had sent His servants to His people over the years. They were the prophets. But His people treated His prophets badly, which we see all throughout the Old Testament. (Elijah, Isaiah, Jeremiah) Then God sent His Son, just like the landowner in the parable. And the Jews were going to kill Him, too, as Jesus knew, when they crucified Him, nailing Him to the cross. When the Pharisees realized that Jesus was talking about them, they were mad, and they wanted to arrest Jesus right there. But they did not do that because they were afraid of all the crowds that were gathered there. And at that time, the crowds were on Jesus’ side.

That is the immediate meaning we can take away from this parable. But parables often have more than one. There is another one we can see here. It is easy for us to look at the stuff we have, our homes, our cars, our tv’s and DVR’s and so forth, and think how we own them. In a sense we do, the government and our neighbors would say so. We do live, after all, in what is known as a consumer society. We do our jobs, we bring our pay home, we go to stores and exchange that money for stuff. BUT, let me remind us today, Everything we see, Everything we have, Everything we ARE, ultimately belongs to God. God created this world and everything in it, the whole universe, and it all belongs to him. If God is then the owner of all that we see, then I guess we are not owners in this world. We are RENTERS! And our Landlord, God, is hoping we will be good tenants. God wants us to be thankful for what we have been given, and to take care of these things, both physical and spiritual. We hear a lot of talk these days from people who use drugs, or who are promiscuous, or who are in favor of abortion and stuff like that, who all say, “I can do whatever I want with my body. It’s mine.” Uh-uh. Paul wrote, “Do you not know that your body is a temple of the Holy Spirit….? You are not your own, you were bought at a price.” We are not owners here, we are renters of all we have, and God expects us to behave accordingly.

Another thing that this parable is telling us is that unlike the tenants in the parable, unlike the Jewish leadership 2000 years ago, we need to gladly receive the Son of the Owner of the Vineyard. This parable says if you reject the Son of God, that will be the worst mistake you will ever make. The rejection of the Son is something we see with regularity. People who say they have no use for religion. Folks who say that Christianity sounds too good to be true. Those who misrepresent who Jesus is or what He did and said. I read an article this week from a pastor in another denomination, mainline Protestant, who said that Jesus was a racist and a bigot and it took Him a while to figure out how to be the Messiah, that He grew into the job. I don’t know about you, but that is not what MY Bible says. We need to see, recognize, KNOW, that the Son of the Owner of the BIG Vineyard is our SAVIOR.

Our landlord God has sent us His messengers (pastors) and His messages through the Scriptures, through the Church. And He has given us Jesus Christ, to die and rise for us. We are not to reject those messengers, the messages, or the subject of the messages. Instead, we are to regularly receive them and go to them. God has given us everything we need to be good tenants. Through His mercy, we have available those things that can lead us to be good tenants of our things and ourselves. So let’s remember, we are all renters, God is our landlord. And for those of us who have had problems with earthly landlords in the past, take confidence in the fact that in God we have a landlord who has already made sure we have everything we need. Especially, His love, His grace, His mercy, and His Son. Go in peace, with that thought today.