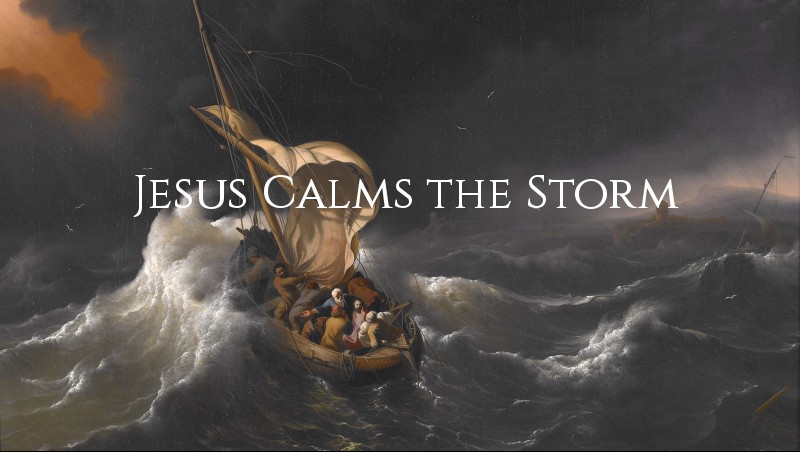 In the Gospel lesson, you see a boatload of men with hearts of mice. Since they had been called to be the apostles of Jesus, they had seen many amazing things. Peter saw Jesus heal his mother-in-law. But he still had the heart of a mouse. The 12 saw Jesus heal lepers and cast out devils. They still had hearts of mice. Because Jesus is the Son of God, the sick were healed, the dead were raised, the troubled transformed and the possessed found peace. The apostles should have been transformed by what they saw, should have had such confidence and courage, seeing Jesus do what He did and by what He said, but they remained men with hearts of mice.

At the beginning of our text, Jesus said they should leave the crowds and He asked the apostles to ferry Him across the lake. I assume they felt comfortable with that. Four of them anyway, knew boats. They could take control while Jesus slept in the back seat. You know that running into some weather would not have surprised Peter, Andrew, James or John. But I am guessing they were surprised that they could not handle it. Waves breaking into the boat. The boat filling up with water. These days we call that “sinking,” you know.

It is safe to assume that the boys in the boat were bailing with everything they had, but it appears it wasn’t enough. The ship was in trouble. The storm was not going away. While the fishermen were skilled with boats, even they knew their skills were not enough. So they, with their mouse hearts, woke up Jesus and said, “Teacher, don’t you care if we drown?”

Accusing God of not caring is nothing new. Job did it in our Old Testament reading today. The children of Israel did it, A LOT, when Moses brought them out of Egypt. And here again God is accused of apathy by the very people He came to save. Jesus woke up, got up, and with only the power over nature that God has, told the wind and waves to be “Quiet! Be still.” And they did. This was a physical impossibility. Try swinging a bucket of water around sometime and stop. See what the water does. And now the 12, the guys with the mouse hearts are still afraid. Not of the storm, but of Jesus! They were afraid of the almighty Creator and Care–er.

What is even sadder than that picture is that so many mouse–like people today still accuse Jesus of not caring. Each day we are protected by Jesus and tragedies are avoided and injuries pass us by. And when something bad does occur we yell at God and say, “Don’t you care?” What proof can God give that He has not already given? The truth is in nature. The truth is all around us. The truth is in the Bible. The truth is in our salvation. God cares.

Now we may not say out loud our complaints to Jesus the way the disciples did. But in our hearts, how often have we reverted to the heart of a mouse and asked, “Does God care?” Whenever any tragedy, hardship, storm or hurt appears, the question comes up, “God, don’t you care?”

As God looked at us in our weak and weary state, He saw our fears, and He did the unexpected. Jesus left heaven and came here to earth. Here, Jesus took our place. He came to us, became one of us, and got dirty with us. He felt our pain and faced our fears. Today you may be facing some fears, or dealing with tears. If you are, God cares. Turn them over to the great Creator and Care–er. As the Psalmist writes, “Cast your cares on the Lord, and He will sustain you.”

Years ago, the elderly Duke of Wellington ran into a boy who was crying. He asked the boy why he was so sad, and he told the Duke that he was going away to school the next day. The Duke thought the little boy was being a coward and gave him a nasty lecture. But the boy went on to explain he was not afraid of school. He was worried because he had a pet toad, and nobody else in his family would touch the toad, feed it, or have anything to do with it. The boy thought his toad was going to die. The Duke apologized and did better than that. He took the toad. And weeks later, when the boy was away at school, he received a letter, on beautiful stationary, that read, “…the Duke of Wellington, presents his compliments to Master Thomas and takes great pleasure in informing him that his toad is well.”

God may not send you a personal letter but if He did, it might read like this: “The Triune God, ruler of the universe, Creator, Redeemer, Sanctifier and Preserver of all things, presents His compliments and love to you, and has the pleasure to inform you that your problem, (whatever it may be), is taken care of.”
And you, my friends, need to know that. During your storms, during those times when you are afraid, when you question whether you can make it through the next day, the next hour, you need to hear Jesus. When you were brought to Him in faith, He promised to be with you. And He is. He will, just as He did for the apostles so many years ago, Jesus will stand up and end the storm. Sometimes He will make that storm disappear; other times He will give you the power to get through that storm. Either way, with Jesus, you will make it. You will make it until the day comes when He safely takes you to your home port in heaven. On that day, if you look back, you will see and thank Him for the many storms in your life He has ended.

Therefore, we need to get rid of these “mouse hearts” we have and remember the words, and promises, and deeds of Jesus. Believe it, because all is well. We are forgiven. We are saved. We have faith. Jesus cares.