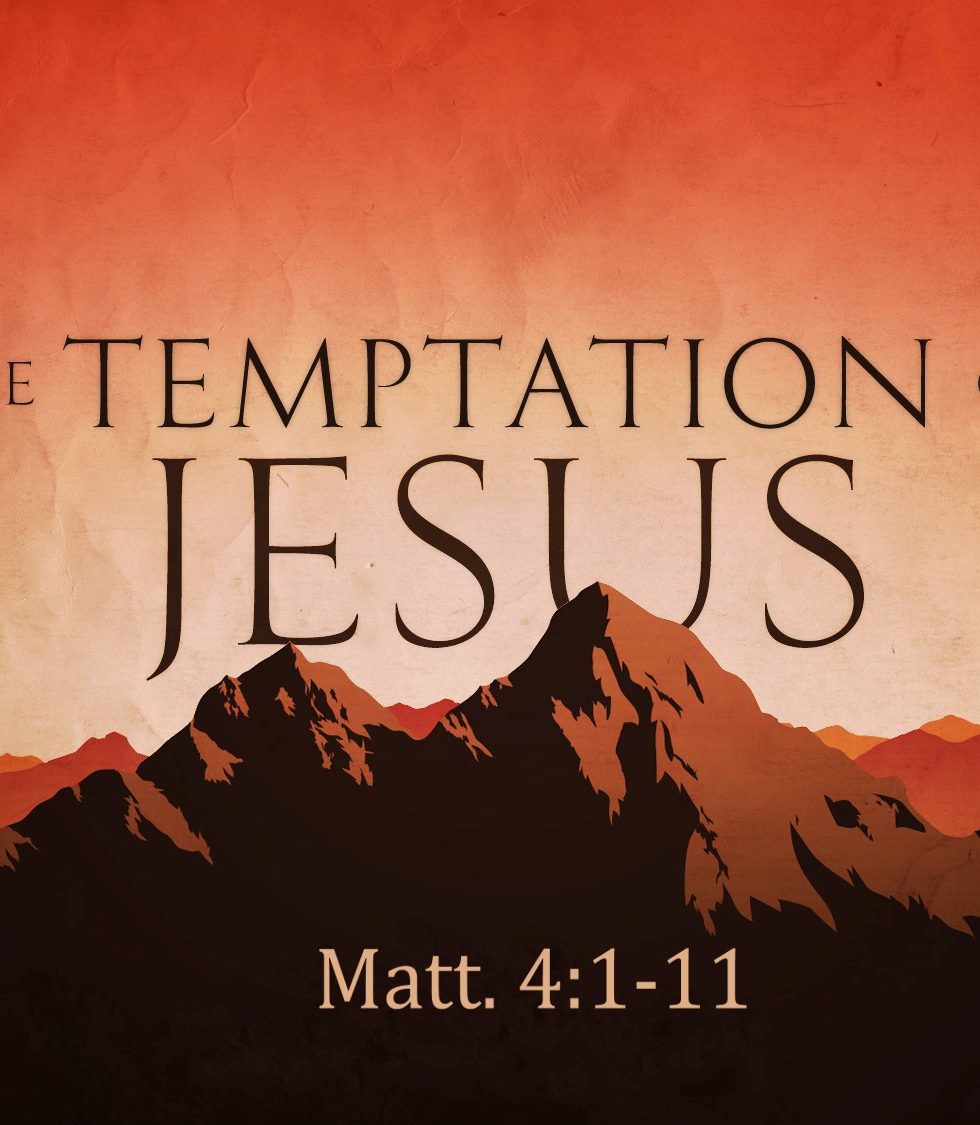 You may know that we have two cats. One of them has decided that it is fun to take their dish with the dry food in it and dump it on the floor. Erica has tried a couple of different things to stop him. Statler keeps doing it. We keep changing tactics…

A few years ago, I read where the Marines in Afghanistan were amazed. They noted that the Taliban troops there were changing their tactics. They stopped going head to head with our troops and switched to using traps and bombs. One Marine observed that “Guys that uneducated shouldn’t be so smart, but they’ve sure got some slick tactics.”

You know who else that describes? The devil. Using some of the oldest tricks in the book, he plots, he plans, he waits, and then he acts. He is incredibly devious and unbelievably patient in how he deals with us. It is his plan to bring us down and destroy us. (Note: we take the Bible seriously when it says the devil is real.)

We see him at work today in the Gospel reading when he tries to get Jesus to sin. Today, the Gospel lesson reminds us of the best way to defeat temptation, and how amazing Jesus is. Today we are reminded of how Jesus Beats the Devil.

I have always found it interesting that when Jesus began His public ministry, and that began when He was baptized by John the Baptist, the first thing that He did was the Holy Spirit led Him off into the desert, all by Himself, for 40 days and nights. (An aside…God really likes the number 40. It rained 40 days and nights, 40 years in the wilderness for Israel, 40 days in the desert for Jesus.) When He was out there, he did not eat for all that time. And He got hungry. Now be careful here, don’t go thinking that because Jesus was the Son of God that was no big deal. The Bible says He is God, and He is a person just like us, BOTH at the same time. (Like we say in the creeds.)

So the first temptation is the devil trying to get to Jesus through His hunger. Satan said, “You hungry? Change these stones into bread. Bon Appetit.” The second temptation is he leads Jesus to the roof of the temple and tells Jesus to jump. If He does, Satan says the angels will catch Him. The third temptation after the forty days was the devil showing Jesus all the kingdoms of the world and saying, “Worship me, and all this will be yours.” Ugh. This makes me mad every time I see this, because the devil is lying. This stuff is not his to give.

In these three temptations, the devil tries to get to Jesus through a craving, through misquoting the Bible, and lying. And Jesus sees through all of it, and correctly quotes the Bible back at the devil, beating back each and every temptation.

Jesus knew how to head off those temptations, but we don’t, usually. If you think about it, there are a lot of times that we put ourselves into situations where we know we will be tempted, and either we think it is no big deal (Everybody is doing it!) or we think we can handle it. There are times that we can make ourselves a big, fat target for the devil.

Let me illustrate this here by asking you a question. What car is stolen the most in the U.S.? Corvettes? Cadillacs? Mustangs? The answer is complicated. I saw lists that said the Dodge Muscle Cars, Honda Civics, Ford F-150’s and the Chevy Silverado. But as recently as 2016, it was the 1994 Honda Accord. That was the most popular car to steal for, like, 15 years. Huh? Well, those cars had no theft deterrent system. They had lots of stuff that sold on the black market. (The parts were more valuable than the cars as a whole.) And owners of these cars figured no one would steal them so they did not lock them and often left the keys in them! So why were they stolen the most? They were the easiest to steal.

The devil works that way, too. He likes the souls that are easiest to attack. If you want to be easy prey for the devil: Don’t read your Bible; don’t pray, don’t come to church to worship, don’t receive the Sacraments, and so on.

This is why the desert is Satan’s place to tempt Jesus. It’s a place of nothingness, with few points of reference, just endless sand and rocks—no life, no vegetation, just plain nothing. Endless nothingness. That is where Satan wants us: in the darkness, in the wilderness, with nothing to latch on to, especially God and His Word.

When Ken Klaus was on the Lutheran Hour, he talked about a seven-foot alligator that was found in the hallways of Stewart Middle School in Tampa, Florida one summer. Teachers made sure the students couldn’t get near the critter, and then they locked the gator in a men’s bathroom until a game officer arrived. One of the teachers said, “He was never aggressive. The only time he was assertive was when they put the noose around him. He got kind of mad.”

The devil is not so easily contained. The moment you think you’ve got him, and his temptations figured out, he turns and does something quite unpredictable. This is just one of the reasons why we need Jesus close to us. Jesus met Satan head on, and He always won the victory. That’s something none of us can say.

Look at Jesus. Satan said to Jesus, “Grab a little of the glory now, Jesus, because you can. Turn these stones into bread; throw yourself down from the temple—God’s angels will protect you; bow down and worship me, and all these things will be yours.” But Jesus knew His destiny was the cross. He fought off Satan’s attempt to keep Him from His appointment with Mt. Calvary. And Jesus fought Satan with the best weapon there is to defeat him. Jesus spoke the Word in the wilderness, for He knew what the psalmist said was true: “Your word is a lamp to my feet and a light to my path” (Ps 119:105).

Jesus is God’s very Son, and the devil knew that the only way to defeat Jesus was to get Him to abandon His Mission, His cross, His destiny of suffering those six hours on Calvary, where God’s violence and anger against Satan’s lies and our disobedience were unleashed upon Jesus, before He rose again. But the devil did not deter Jesus. Jesus went and did what He came here to do.

And I’ll tell you something else. When Jesus was on the cross, and He knew His sacrifice was complete, He said one word in Greek which is three words in English. Tetelestai = “It is finished.” When Jesus said this and died, the devil knew he lost.

It is traditional on this Sunday to sing the good old Lutheran Reformation hymn, “A Mighty Fortress is Our God.” If you look in your bulletin, you will see that the last line of the third verse is “One little word can fell him/one little word subdues him.” We have talked today how God’s Word is the best weapon against Satan. But did you ever ask yourself what is the “one little word”?

I did. I did a little research and checked out a couple of theories. One is that the word is Jesus’ Name. The argument can be made. Another theory is the word, “Liar.” Satan is certainly a liar and God’s Word reminds us of that. But I think the answer to this riddle is that word “Tetelestai.” Because it is the Word Jesus said on the cross that said He won.

Therefore I would put it to you to flee temptation and the tempter, and when he catches up to you, remind him who died for you, who rose for you, and who you belong to really: because that’s Jesus.