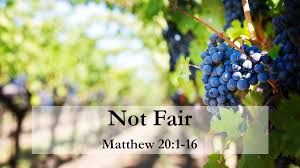 I hear a lot of talk these days about fairness. People who run for president, and win the popular vote, but lose in the electoral college, and then write a book, and go on a book tour, say that is unfair. Some people think if someone makes more money than they do, that that is unfair. If your favorite sports team spends 63 million on salaries for the players, and the team you love to hate spends over 200 million (Like the New York Yankees), well, some say that is unfair. I have heard in my house when I tell someone “No,” or “Not now,” that, “This is not fair. This is so not fair. I know when I have kids, I am going to let them do whatever they want.” Uh huh. Whenever I hear that, I think to myself how likely I am to see that.

As a people, a culture, a society, we think fairness and equality are important concepts, that is, after all, a foundation of democracy. Of course, what goes on at my house is no democracy. It is a dictatorship. (I think of myself as a benevolent dictator, but I’m not sure my kids do.) In the gospel for today, Jesus tells the parable of the workers in the vineyard, and in examining this text, we will see that God and His children do not always agree on what is fair. This morning, we are going to discuss, “God’s Fairness.”

Today we are in Matthew Twenty. The text last week was the end of Chapter Eighteen in Matthew, where Jesus told the parable of the unforgiving servant. Chapter Nineteen ends with Jesus telling the disciples that being rich, in and of itself, does not bring a person into the kingdom of God. This was the opposite of what the disciples had been taught over the years. People in those days thought the more you were blessed in this life, the more you would be blessed in the afterlife. There are preachers that still teach this today. There is a certain logic to this. But you will not find that teaching anywhere in the Bible. Jesus told His followers that God’s ways are not necessarily the ways of people, and Jesus went on to illustrate that with the parable of the workers in the vineyard.

There was a guy who owned a vineyard and it was harvest time. The grapes in Palestine had a very small window for harvesting. They would normally be ready to harvest at the end of September, but it wouldn’t be long until the rainy season began after that. Once they were ready to be picked, they needed to be picked quickly. At dawn, he went into the town square where people would go when they needed work, and he hired all the folks who were there to go into his fields for a denarius. A denarius was a common day’s pay for an agricultural worker, approximately 75 dollars in today’s money. Three hours later he went back and saw more folks there and hired them all as well. At noon and at three he did the same thing. Even at 5, with only an hour of sunlight left, he went to the town square and found some folks who had not worked that day. He hired them and sent them to his vineyard, too.

What do you think? Was the landowner fair? Is this fair? There are times in our lives that we think about such questions. When we were in school, we would ask if that test or that question was fair. I remember when I was in college, and still in the School of Engineering. I had a final in Semi-Conductor Theory that was a 200 point test. I got a 12. That was good enough for a D. An A was around 40. Does that sound like a fair test? When we played in the park or the schoolyard, we asked if the teams we had picked were fair. In our jobs, if we are criticized for our performance, we ask if the criticism is fair. When someone gets promoted ahead of us, we wonder if that was fair. You know what I mean?

But there are other times we ask the fairness question, only we ask it of God. When we see God as the landowner in this parable, and all the workers as converts to Christ, the question is then asked, is God fair? Is it fair that people who are Christians for all of their lives and folks who are Christians for an hour before they “meet Jesus” all go to heaven? Is it fair we all get the same? We ask that at other times too, don’t we? When we get sick, when there’s trouble with a spouse or a child, when we feel depressed, alone, directionless, we can find ourselves confronting God and saying to Him, “It’s not fair!” Or telling Him, “You’re not being fair!” Are we being fair when we ask that? It’s bad enough to wrong God when we sin, but should we ever think that we have been wronged by God?

It is time to answer this question: Is God fair? Let’s look at the parable again. God’s grace is poured out on the people He loves, equally. Whether a person is a Christian from infancy, adolescence, adulthood, or even converted on their deathbed, all receive the same reward: eternity in heaven. Is that fair? From the standpoint of human logic, you may say no. There is a tendency among us to look down our noses at those who become Christians later in life than we do. Everybody is getting the same here in this story not because they have done enough good works, but because they have a good Lord. It was reported that Jeffrey Dahmer was converted to Christianity before he himself was murdered in prison. I have heard people say that they do not want to think of him being in heaven. I knew a guy back in the day who hated this Gospel Text because he didn’t think God should act this way. But we are wrong to think that way. And that’s what the parable is telling us this morning. Human logic may believe this is unfair, but we are blessed to be treated in such an “unfair” manner. God is fair the way God is fair. And we are blessed because He is fair His way.

Let’s start to wrap up with this: I have told you this story before, but I think you should hear it again. I read on the internet about a newspaperman years ago in New York City. Guy’s name was Horace Greeley. He was big in New York about 175 years ago. He said, “Go west, young man.” Greeley thought people remained doubters, even when they had solid proof their lack of faith was wrong. One day, Greeley decided to test his theory. He had a man stand on a street corner and offer to sell 20 dollar gold pieces for the price of a one dollar bill. That’s right, $20 in gold for a $1 bill. It seemed like a deal too good to be true. That’s what most people thought. That’s why, for the entire day, the man kept calling out his offer.

Thousands of men and women, thinking the man was nuts, gave him a wide berth and passed on by. Some laughed at the silliness of what he was proposing; others shook their heads in doubt. Late in the afternoon, about 15 minutes before the man was going to quit, a lady, shyly approached the man. The lady paid her dollar and walked away with the gold double eagle. Ten minutes later she showed up again, this time with two friends. Between them, they bought eight more of the double eagles, all the man was offering.

Christianity has been conducting the same “experiment” for 2,000 years. Ken Klass put it this way: “We have held out an offer that is, in human terms, simply too good to be true, that doesn’t sound fair. We have spoken to the lost and lonely, the damned and dying, the hurting and hateful, the despondent and depressed. We have called out to sinners and we have said, ‘Repent of your sins, with Jesus find forgiveness, healing, and peace.’” Receive what God offers you in the death and resurrection of Jesus, and you are saved.

And what has been the reaction? By the Holy Spirit’s power, some have believed. But there are also many who have passed on by, others who thought it can’t be or it’s too good to be true.
God’s idea of fairness and our idea of fairness do not match very well and thank God they do not. If God was fair like we are fair, He would have looked at us and our zillion sins and said ok, you want hell, you got it. He would not have loved us as He does, or sent His Son, or given us the Scriptures, or Baptism, or the Lord’s Supper, or any of the other blessings we have. But He did. His idea of fairness is way better than our fairness. He loves so much better than we love. He loves us so much He sent Jesus to die and rise for us, and He has clothed us with the righteousness of Jesus and looks at us as His forgiven children. Is that fair? In human terms, no way, it’s better than fair. It’s grace, God’s grace. And grace is by nature unfair because it gives the undeserving more than they deserve. We have not deserved what God has given us. From a human perspective, God is truly unfair. And thanks be to God, that because of His love for us, His “fairness” is so much better than ours.