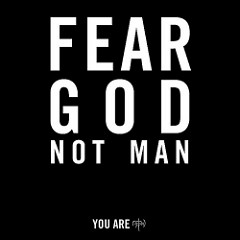 Growing up in a Lutheran family, I grew up knowing what it was to “FEAR GOD.” When I was a kid, I went to church every Sunday, Sunday School, VBS, and even went to a Lutheran grade school. So very early in my life I was introduced to Luther’s Small Catechism. The first thing I learned from that book was Luther’s meaning to the First Commandment, “We should fear, love, and trust in God above all things.” We should fear God! This was something I had to deal with at a very young age. I couldn’t have been more than eight years old when I was told to memorize the First Commandment and Luther’s meaning. Fear God. Being a kid, and being influenced by my pastor, my parents, and my German–American upbringing, I always figured that to fear God was to be afraid of God. I always figured, “If you sin, God is going to SMITE THEE!” But that is not what we mean when we say we should fear God. For the Christian, the fear of God is not being afraid of God, but (according to the catechism) knowing the Triune God is in charge, knowing He saved us through His Son, and knowing we are to honor Him and avoid what displeases Him. The more we fear/know our Father in heaven, the less we have to be afraid of here on earth. Today we are going to discuss how we are to “Fear God, & Fear Less.”

The discussion we are having this morning is that when we fear God, we fear less. Now you may be asking, “How can our trust in God remove fear from in here?” First of all, we should be less afraid in this world because Jesus has given us His Word. As Jesus sent the Twelve into the world, He told them that they would run into trouble. He guaranteed it in Jn. 16:33: “In this world you will have trouble. But take heart! I have overcome the world.” He did that when He died on the cross and rose again. We have Jesus’ Words, His words of law and correction, and His words of comfort and forgiveness. We have heaven, for we have His promise. Jesus said, “I will be with you always…” Jesus said 15 times in the Gospels alone (three times in the text), “Do not be afraid.”

Another fear that the followers of Jesus may run into is a fear of being treated badly or unfairly because of our faith in Him. There are places, careers, businesses, where people with faith in Jesus are not welcome, are not promoted, are not viewed as an asset. I know that at one of the radio stations I worked at years ago, I was considered a freak by the other announcers and the bosses because of my Christian faith. And there are places in this world (Egypt, Pakistan, North Korea) where being a Christian will get you killed. (Bernie Sanders, LGBT groups) If people give us a hard time because of our faith, our attitude should be, “Let them.” As one biblical commentator put it, “Let him who will persecute the Gospel persecute it, it is nonetheless the truth. This is not a surprise, for Jesus Himself had the same experience.”

Another reason we should be afraid less is because Jesus reassures that nothing bad will happen to us of lasting consequence when we belong to Him. We are in God’s hands. There is nothing anyone or anything in this world can do to really, truly, harm us, because our souls, all we are, are in God’s care, 24-7. Knowing this, we can then lead lives without fear. We need not be afraid of being a Christian. We need not be afraid of sharing our faith. We can be bold. We can live boldly. The Gospel must be proclaimed. As Jesus said in our text, “What I tell you in the dark, say in the light; what you hear whispered, proclaim on the rooftops.” Like Paul, we can say, “I am not ashamed of the Gospel, because it is the power of God for the salvation of everyone who believes.”

The story is told of a guy named Peter Cartwright, who was a preacher almost 200 years ago in this country. He was often thought of as “uncompromising.” One day the President of the United States, Andrew Jackson, was in the congregation. The pastor was warned not to say anything out of line, or offensive. Sounds just like the “politically correct” era we live in, right? When Rev. Cartwright got up to preach his sermon. He said this, “I understand that Andrew Jackson is here. I have been requested to be guarded in my remarks. Andrew Jackson will go to hell if he doesn’t repent.” The congregation was shocked and wondered what the president’s response would be. After the service, President Jackson shook hands with Cartwright and said, “Sir, if I had a regiment of men like you, I could whip the world.” We need to know that we can be that bold, too. Not just in sharing the message of the Gospel, but just living it in our lives. People can see and know the love of God by the way it pours out of our words, our deeds and our attitudes.

Another reason to fear less is God leaves nothing to chance. Every detail is under His watchful eye. We can take comfort in knowing that God is infinitely more interested in us than He is in sparrows, for example. Sparrows will still fall to the ground and our hair will fall out (Hopefully not for anyone with peladophobia), but God sees farther down the road than we can. He has The Plan. And everything will work out perfectly for us in the end. I read about a father who went to talk to his pastor. The father had been through a lot, as months before his young son had been killed in an accident. The father told his pastor, “The only thing that gets me through this is to remember that (my son) was God’s child before he was ever mine.”

Therefore, do not be afraid of God, like I was as a kid, because our God does not seek to crush us. He sent His Son, Jesus, and offered Him up on the cross and raised Him again as the offering to bring us the forgiveness of our sins and salvation. We can stop being afraid. Give this life everything you’ve got. Be bold! Jesus said, “So everyone who acknowledges me before men, I will also acknowledge before my Father who is in heaven…” Jesus also said, “In this world you will have trouble. But take heart! I have overcome the world.” Fear God. And fear less.