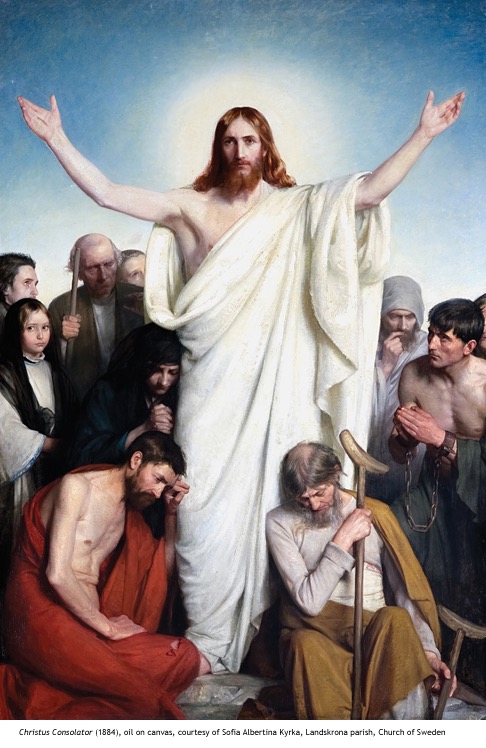 Today I am going to begin with talking about a painting, and I am not a guy who is into art. I’m the kind of guy who is more into “Dog’s Playing Poker” or a Star Wars one sheet than Rembrandt or Van Gogh. But in preparing this sermon, I read about a church in Sweden, Sofia Albertina Kyrka in Landskrona, that has a painting above the altar. The painting shows a bunch of people in various states of anguish huddled around the risen Jesus. The painting is by Carl Bloch. And Carl Heinrich Bloch was a Danish artist who used his talents to portray various episodes of the life of Jesus. The title of the painting in the Landskrona church is Christus Consolator. A consolator is “one who consoles.”

Now I am assuming that you have not heard that word very often: “consolator.” Consolator, as a word, is obsolete, according to Merriam-Webster. It’s true; we don’t hear that word anymore. The word we do hear is consolation, and while you may be thinking it is a word which means to make someone feel better when they are sad or something, these days it is really, almost, actually becoming synonymous with loser. Who here has ever received a consolation prize? Tell me, were you ever genuinely consoled by a “consolation prize”? You just lost in front of a bunch of people and someone gives you a purple ribbon—not blue, not red, not white, but purple. Go home and console yourself with this purple consolation prize; you lost. With me?

There was a commercial from my youth that I remember. (1976) A father and son were leaving a hockey rink. The announcer introduced us to Pete, still in his gear. He was the goalie who let the puck get by him that lost them the game. The dad, who knew his son felt bad but who also knew that life is much more than hockey, offered his son a wintergreen Life Savers candy. The son grudgingly took what his dad offered. The dad told his son that when the dad fumbled and lost his high school’s big football game, it took a whole roll of Life Savers to make him feel better. The son turned to his dad and smiled and asked him if he had a whole roll. The dad reminded his son there would be other games. Then the scene ended, and the announcer told the viewer how to interpret the scene: Life Savers are a part of living.

A roll of wintergreen Life Savers may be useful for some occasions, but the people in the Christus Consolator painting don’t strike me as those who would be truly consoled with a mint. In the painting, a prisoner in chains is looking for relief from his sins. A cripple has seemingly lost the will to live. A widow huddles beneath the fold of Christ’s garment. An orphan looks out at us, sad and hopeless. A doubting-Thomas type wrestles with his skepticism. None of the figures in the painting is a biblical character. Instead, they are representatives of the countless people through the ages who have encountered Jesus the Consolator. The One who said, “Come to me, all who labor and are heavy laden, and I will give you rest” (Mt 11:28).

We find refuge in Him, hope, peace, CONSOLATION in the Consolator. And the image in that Swedish church reminds us that the Divine Consoler welcomes the troubled and suffering. In the text, Jesus walks into a house, Peter’s house, where someone is sick. Peter’s mother-in-law is suffering with a fever (a “great fever,” according to St. Luke). In those days, before antibiotics, such fevers were a genuine and immediate threat to life. We are not told her name. This might be a surprise, but it is not an accident. Early Church Fathers, those who were taught by the disciples, say that Mark used to hang out with Peter. Of course, St. Mark knows Peter’s mother-in-law’s name; yet he does not use it. Why? Mark is telling us something. Mark is telling us that Jesus helps the anonymous, the forgotten, the nameless, faceless individual who is in need of consolation. She offers no prayer, she makes no overture toward the Lord, yet He comes to her. He is the one who takes initiative with us, to serve us, to extend life to us. He does not grow tired or lose patience in His pursuit of us. He does not turn away when the road to help us becomes hard. He comes to us wherever we are, fixing whatever our suffering may be.
An exchange takes place in the text: her sickness and His health. He takes what is ours and gives to us what is His. Sickness, demon-possession, disease, sin, and death—He came to take it all. No magic wand, no incantation, or presto-chango mumbo jumbo. Jesus took her by the hand and lifted her up. The fever left her. He takes away sickness and death. . . He gives life.

We should note that more than one biblical writer tells us about this blessed exchange, about how Jesus works. Isaiah writes, “Surely he has borne our griefs and carried our sorrows” (Is 53:4). Matthew writes, “He took our illnesses and bore our diseases” (Mt 8:17). Paul tells us that Jesus Christ became poor with our poverty, He became sin by taking on all of our sins, He became dead with the death of the whole human race. He takes what hurts us and He restores us with His virtue, His blessing, His victory, His truth, His love. That is consolation.

This life is very often not pretty, not comfortable, not fun. Many times, people look for/need consolation. People hunt high and low for every conceivable way to cope with trouble in life, and they often come upon something that they think will turn things around. An adulterous relationship, a bottle, gambling, clothing, food, shopping sprees, travel, philosophy, entertainment…. Looking for consolation in these things not only doesn’t help but very often makes the problem worse. It may reduce the pain temporarily, but it does not console. Our Lord brings us something more. Jesus brings REAL consolation.

Jesus took the woman by the hand and lifted her up. That exact same phrase is used one other time in the Gospel narratives: for Jairus’s daughter, his dead daughter. She, too, had no name. She lay in the house, a twelve-year-old, lifeless. The situation was not one that a wintergreen Life Savers candy could resolve for Jairus and his wife. Christus Consolator moved directly to the child’s side, took her by the hand, and raised her up: “Child, arise” (Lk 8:54). Resurrection is consolation.

On the holy cross, as Jesus carried the weight of our horrible deeds, there was none to console Him. Sacred head, horribly wounded, with grief and shame weighed down. In that act, in that sacrifice, your eternal consolation was in view. To bless you and sustain you, He died; the Son of God Almighty died. To console you in whatever grief this world brings, the Lord of heaven and earth died. (AND ROSE!) The Lord’s Empty Tomb Is Divine Consolation for Sinners Who Know That Sin and Death Is Real.

“I came that they may have life and have it abundantly” (Jn 10:10). Jesus the Consoler said that. He served Simon’s mother-in-law with His life. He serves you, here. Let me remind you that the painting we are talking about hangs above an altar. Good place for it because think what happens at altars like this one. Christus Consolator serves you through the Word, the preached Word that you hear in this chancel. He serves you at this altar where He gives you His body and blood. He consoles you with His resurrection and sends you out to serve your fellow people. The great fever of your sin is not on you. You are forgiven. Your shame has been removed; your guilt atoned for. All this is consolation of the highest order. Here is precisely where our consolation is found; here is precisely where THE Christus Consolator welcomes us, where we find rest, where He gives us the supreme comfort of His love, His forgiveness, His death and resurrection, faith and eternal life.

Last year we talked a lot about what a bad year it was and how many bad things happened. Honestly, so far, 2021 isn’t really any better. (It’s still early.) But know this! When we talk about God giving us consolation, it is no purple ribbon or some such thing. Receiving His consolation, we get up; courage comes from His consolation—courage and strength and fortitude and hope. His consolation provides momentum; we walk toward heaven, each day we are closer to a consolation in a cup that runneth over. We shall run in this life, the race marked out for us; we shall run and not be weary. We go toward heaven. We will not faint. And you know why. We know: Christus Consolator is with us.