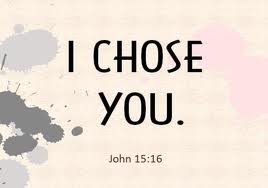 From the time we are very young, we are acquainted with the idea of being picked, starting with something like “Tag” (because then you are picked to be it) or “Duck, Duck, Goose” (because then you are picked to be Goose). Then we graduate to picking teams on the ball field, and so on. There are things we like to get picked for: an Academy Award, a Nobel Peace Prize, a free pizza. A couple of weeks ago the NFL had its draft. The first player selected was Jameis Winston, QB Florida State. He was happy to be picked first. The last guy picked, pick 256, was TE Gerald Christian of Louisville. “Mr. Irrelevant,” as the last pick each year is referred to, was probably happy to be picked at all.

But whatever we have wanted to be chosen for in this life, we have all had to deal with NOT getting picked. To be the one not chosen, whether it’s for a team, a job, a club membership, or anything else, whatever it is, that can be one of the most embarrassing events in life. We end up feeling rejected. Maybe even inferior. In the First Reading today, we hear that both Justus and Matthias were considered as the one to replace Judas as the twelfth disciple. Matthias was chosen, and Justus was not. Justus knew the embarrassment of not being chosen for this position. Yet we know that Justus and all Christians are chosen by God to be His children and to be witnesses to Him. Each of Us Is Special to God, for He Chooses Us Even If the World Doesn’t.

For now, we are going to go back to the idea that all of us can relate to “the unchosen” Justus.  Someone was needed to replace Judas as the twelfth disciple after Judas betrayed Jesus and took his own life. The apostles were gathered together during those ten days between Jesus’ ascension and Pentecost. The apostles did not know when the Holy Spirit was going to come, but they thought, assumed that to carry out the Great Commission Jesus had given them before He ascended, they would need to be at full strength—twelve strong. So the other Christians considered two men for the job—Justus and Matthias. Both men were qualified. Both had experience. Both had served faithfully. Both were deserving of the honor. Both were loved by God. They were both good men, but only one could be chosen for this position.

After casting lots, equivalent to our drawing straws, Matthias was chosen. Today, Matthias is remembered as a saint. He has his own special day: February 24 is celebrated as St. Matthias Day.

And Justus? Well, he is completely forgotten. After this account in Scripture, he drops out of sight and is never heard of again. Being forgotten is what often happens when you’re the one not chosen, when you don’t win. You might remember who won the Masters, or the Super Bowl, but who came in second place? When you lose, not picked, you can be forgotten, ignored, or considered a nobody.

I can’t help but wonder how Justus felt that day. He was qualified, experienced, deserving. One hundred and twenty of his fellow Christians said he was eligible, but Matthias got the job. How did that feel, to be the “unchosen one”? To have them say, “No, Justus, not you, but Matthias.” Justus even knew that God had caused the lot to fall where it did. God chose Matthias rather than him. I bet that hurt.

But in the world, we can’t all make it to the top. The base of a pyramid is much bigger than the top. A large company had an opening for 5 management positions; 1,500 people wanted the job and applied for it. But only 5 were selected. As a result, that meant 1,495 were not chosen. That happens a lot of times, a lot of places these days. Justus has a lot of company today.

Often, there’s no consolation prize. Ricky Bobby famously said, “If you ain’t first, you’re last.” In fact, just the term “consolation prize” reminds us that when we’re not chosen for whatever the big prize is, we need to be consoled.

Every one of us is at times the “unchosen one.” We can identify with Justus very easily, right? The “unchosen ones” exist everywhere: the one who didn’t have enough skill to make the team or good enough grades to get into the college; the one who didn’t get the promotion or the new job. We wonder why that person didn’t date us or rejected us. It still bothers me I was tenth on the tennis ladder my senior year of high school, which means I was on the varsity team, but the kid who was number 9 did not pick me as his doubles partner and so I was on JV all year. You got a story like that? I’ll bet we all do.

However, whether or not the world has chosen us for any special honors or awards, God by grace has chosen us to be His sons and daughters. To be chosen by God’s grace is the greatest recognition or award in life.

Time after time, the Scriptures remind us of our chosen status. Long ago, the prophet Isaiah wrote, “ ‘You are my servant, I have chosen you and not cast you off’; fear not, for I am with you; be not dismayed, for I am your God; I will strengthen you, I will help you, I will uphold you with my righteous right hand” (Is 41:9–10). Jesus told His disciples, “You did not choose me, but I chose you and appointed you that you should go and bear fruit and that your fruit should abide, so that whatever you ask the Father in my name, he may give it to you” (Jn 15:16).

By Jesus’ death on the cross, and His rising again, He shows us that despite our sin we are special to God. We are important to Him. We are the chosen ones who are loved, forgiven, and saved by His grace. By the Holy Spirit, we are placed on God’s spiritual team, the Church. Here, He invites us to come to His Holy Table, where we receive His body and blood for the forgiveness of our sins.

We are God’s chosen ones, and that is awesome! Imagine you’re at a large gathering of people, awaiting the arrival of an important guest. Everyone’s standing around, looking at the door for the special guest to come. Finally, he arrives. All eyes are suddenly on him. He seems so knowledgeable, so energetic, and so electric in his personality. You would love to speak to him, if only for a short time. Everyone in the crowded room is thinking the same thing. Now the guest’s eyes scan the room, searching. Suddenly, his eyes stop, he smiles, and he walks over to you. He extends his hand and introduces himself. You, of all the people in the room, have been chosen for his special recognition. That would be a big deal, right?

We have known that feeling. Words spoken to us can make a big difference in our lives. A coach says, “You made the team.” A teacher tells us, “You are an outstanding student.” That special someone whispers to us, “I love you.”

In the words spoken to us at our Baptism, God says to us, “You are my child. I forgive your sins. You are now a part of my family of faith.” We matter to Him. Jesus loves us so much He died and rose for us. That was no easy thing, you know! We, too, know the power of God’s words. Each one of us is His chosen one. When Martin Luther was tempted to put himself down or feel depressed, he reminded himself of his Baptism, which made him a child of God.

So here is what you can take away from this place today: whenever we feel unchosen, unwanted, or unloved, we can be reminded By God, by His Word, that our value in God’s eyes is not determined by how many teams we’re on, how many awards we’ve won, how much we have, or how others view us. Rather, our worth is given to us by God, who made us in His image and saves us by His grace. Never forget or doubt that in Christ, we are God’s loved, forgiven children. God chose you. God picked you.