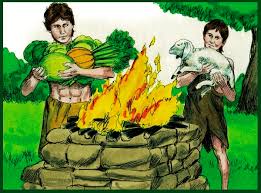 A certain comedian who used to be popular, and now is not popular, said in one of his standup routines that if a husband and wife have ONE child, they are not really parents. When he said this, it was obvious that the people in the audience disagreed. But he argued that if you only have one child, and something is broken, you know who did it. If you only have one child, you as a parent never hear the words, “Will you stop touching me.” Right?

The Bible tells us that after Adam and Eve left the Garden of Eden, they had a baby that they named, Cain. And then they had another baby that they named Abel. Two boys. And I would love to report that those two children, the first children born here on this Earth, that they got along splendidly. But they did not.

The Bible tells us that Cain was a farmer and that Abel was a shepherd. These would obviously be two basic jobs that would be needed back in those days. Someone needed to grow the food that grows, and someone needed to look after the soon to be food that mooed or “baaed” or clucked or oinked if you were not Jewish. This is what they did to help out the family.

We are then told in the fourth chapter of Genesis that the day came around when both Cain and Abel were going to worship God and offer God a burnt offering. It is good news in the now sinful world that Mom Eve and Dad Adam taught their kids to worship God. That was good. And they did that by giving burnt offerings. That was God’s Old Testament way to worship. You offered Him a sacrifice. We do not do this anymore because God later offered His Son, Jesus, to be THE Sacrifice for our sins. But this is how they did it then. On this particular day of worship, Abel gave his best sheep as a sacrifice that day, what the Bible calls the first fruits. We have talked about this before in stewardship sermons. Abel offered the best he had. Cain, the farmer, also offered his sacrifice in worship to God, but he kept the good stuff and put the broccoli, the brussels sprouts, and the cauliflower on the altar for his sacrifice. He gave the leftovers. God was NOT happy with him. God wants us to happily give him the first fruits, not the leftovers. God wants us to be happy to worship Him. (Psalm 122:1: I was glad when they said to me, “Let us go to the house of the LORD!”)

The two brothers offered their sacrifices. God “had regard” for what Abel offered. God was pleased with what Abel did. Abel was giving of his best. Right? For Cain’s offering, God had “no regard.” In Hebrews 11:4, we read: “4 By faith Abel offered to God a more acceptable sacrifice than Cain, through which he was commended as righteous, God commending him by accepting his gifts. And through his faith, though he died, he still speaks.” It is apparent that Abel trusted in God and His promise of a Savior, and Cain did not. Cain was not loving the Lord His God with all his heart and with all his strength and with all his mind. He was just going through the motions. When Cain saw that God was pleased with his brother and not with him, Cain was “very angry, and his face fell.” That is what the Bible says.

As parents, we have all had those times when we have had to tell a child they did something that was not good enough. Whether it was something they did that was misbehaving or something we told them to do and they did not do a thorough, complete job in the task that we assigned them. I still have very vivid memories of my dad telling me to cut the grass or wash a car, and after I informed him that I was “done,” he informed me that what I had done was not good enough, it was not complete. My kids have it so much easier than I did half a century ago…

Anyway, God basically said to Cain the same things that parents have been telling kids for millennia, that “If you do what I ask you to do, I will be pleased. And If you do not, then I won’t be pleased.” Right? This is pretty basic stuff here, right?

At first, there was a sign of optimism as Cain said to Abel, “Let’s talk.” Talking is good. That is how we fix problems…we talk them out. Cain said let’s go out in a field. Privacy is good. No distractions. Well, then the plot takes a rather nasty turn. The Bible says that “Cain rose up against his brother and killed him.”

And just like his mom and dad, Cain thought he could get away with his sin and fool God. God comes along and says, “Where is Abel?” Cain gives us the famous, “I don’t know. Am I my brother’s keeper?” God gave him a chance to confess, come clean, but He lies to God, which is no help at all. And God said, “What have you done? The voice of your brother’s blood is crying to me from the ground.” If Cain thought he was going to get away with it, he knew then he was not.

We do not have a murder weapon mentioned. We are not told how he did it. But we do know why. Every family that has siblings, they will think and maybe even talk to each other about who the favorite is, who mom and dad like best. Cain felt that God loved Abel more than him. And he took Abel out because of it. And at this point, we have 4 people listed as being on earth, 4 people, and one kills another, and we are left with three. When you combine this sermon with last week’s sermon, you see that things have really gone downhill, from perfection to murder.

God then pronounces Cain’s sentence. Because Cain had spilled Abel’s blood on the ground, the ground would no longer produce crops for Cain. He would have to “be a fugitive and a wanderer on the Earth.” He would have to gather what someone else grew and rely on the kindness of others to provide for him.

When Cain heard his sentence, he complained. He said it was more than he could bear. But there was something he did not say. Even after getting caught, even after hearing his punishment, he didn’t show any sorrow, he didn’t show any remorse, he didn’t admit any guilt. All he was worried about was himself. And even then, God showed mercy in putting a mark on Cain (We don’t know what that was. “Never described and not important.”), and God promised that anyone who killed Cain would see the vengeance of the Lord sevenfold.

All of this is important because we are more like Cain than Abel. Sin works quickly. We see it in chapters 3 and 4 of Genesis. We see it in our own lives. We tolerate the “small sins” we do, and they quickly become habits. Those bad habits lead to even worse sins. And so on. We don’t want to do as we are told. We want to do what we want to do. We want to be SELF RELIANT.

Cain was that way. And what happened to Cain should scare us to death. In him, we see little sins leading to big sins. And that happens with us. And if you are thinking, “I’ve never killed anybody,” remember what the Bible says, “Everyone who hates his brother is a murderer.” (I John 3:15)

But just as God showed Cain mercy even though Cain showed no remorse, we know that the Bible also says that where there is repentance, sorrow, an admission of guilt, there is forgiveness. Cain was too blind to see God’s love and mercy. I am prayerful that we are not that blind. God offers us forgiveness not because of how good we are (we’re not) and not because of our good works (they aren’t good enough). He offers us the forgiveness achieved by Jesus, His death on the cross, His resurrection because we need it. That’s how much He loves us.

That may not be the way we do things. But it is the way God does things. He is God. He can do this stuff the way He wants to. And there is no point in trying to lie to God or deceive God or hide our sins from God. He knows who we are. He knows what we do. He is waiting for our prayers of repentance. He is eager to take away our sins by the blood of Jesus, the blood that was shed for us all, the blood that saves. He is our Heavenly Father. We are his squirrelly, ornery, whiny brats. And He loves us anyway.