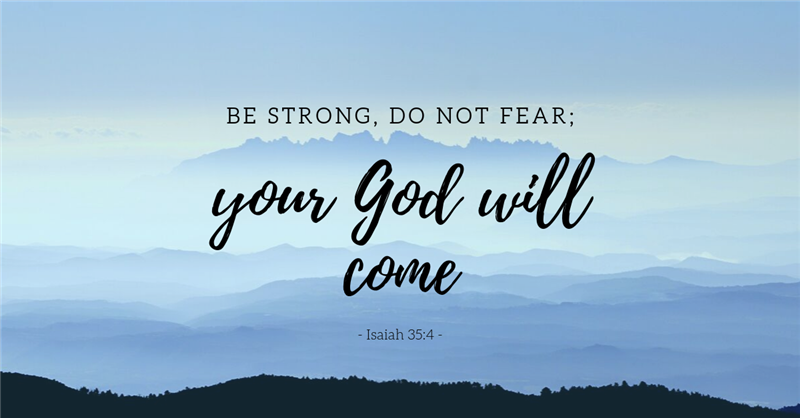 In real life, we also frequently see disasters playing out on our screens. We just saw one again in New Orleans with hurricane Ida, and the earthquake in Haiti before that. There is weather out there, and what are called “natural disasters” out there, that can be really scary. We confess in the explanation of the First Article: “I believe that God has made me and all creatures,” but we also experience creation as a threat. We deal with storms and disasters and sickness and all kinds of things we are afraid of (more on that in a bit.) This world can be a fearful place. And it has been that way since the first sin. Martin Luther said that after the fall into sin, Adam and Eve, who are the only people to see this earth when it was perfect, would have been terrified by something as small as a leaf rustling in the breeze. Yet it is into this world that God comes in the person of Jesus to save us and, in doing so, to restore us to life with Him in His creation. So I am here to tell you today, while we are a few weeks from weather cool enough for leaves to fall, Do Not Fear the Autumn Leaves, Do Not Be Afraid, for God Comes to Save His People and His Creation.

People are walking around all anxious these days. People are worried these days about all kinds of things: Iran acquiring nuclear weapons, is the Taliban in Afghanistan going to come after us again, the world economy and the stock markets, rioting and police officers being shot. Lots of people worried about lots of stuff.

Another category of things that has people worked up is the Mother Nature stuff. One of the effects of sin that does not get as much airtime as others is that when sin came and ruined people with Adam and Eve, it also ruined creation. Before Adam and Eve sinned, there were no earthquakes, no floods, no tornadoes. Sin didn’t just mess us up, it messed up the world. So we have seen what hurricanes can do like Katrina, Ike and Harvey. We know tornadoes here, especially our friends in Moore.

Another thing that happened with Adam and Eve sinning was that disease, affliction and death entered the world with sin. Before Adam and Eve sinned, there were no colds, no flu, no infections, no adhesive capsulitis, no shingles, no cataracts, no detached retinas, no piriformis syndrome, and so on. Diseases and illnesses can hit us suddenly and unexpectedly. We can get hurt in accidents. Our hearing, eyesight, and mobility can slowly dwindle as we get older. You all know how that works. None of this happened in the Garden of Eden. (Death/disaster not natural.) All of this stuff is stuff that happens because sin is here. There are no guarantees where our health is concerned.

The Lord speaks of these days as times of stress, perplexity, and anxiety. Jesus said, 25 “And there will be signs in sun and moon and stars, and on the earth distress of nations in perplexity because of the roaring of the sea and the waves,26 people fainting with fear and with foreboding of what is coming on the world. For the powers of the heavens will be shaken.” (Lk 21:25–26).

There are people who look at history and then look to the future and think as we get smarter, as we make cell phones that can drive your car for you and make a cappuccino too, that we will slowly make our way to Utopia. This is nuts. Instead of evolving toward a state of harmony and perfection, the earth and all the life on it are spiraling to chaos and entropy. And this is not a case of moral or cultural pessimism, this is what the Bible says is going to happen.

While we live in a world that seems to be fighting back against us because we ruined it with sin, while we deal with the stress and pain of sickness and injury, we also look around and think that evil is winning. The righteous suffer while the wicked seem to prosper. Injustice prevails on national and international levels. For example, all the Christians in prison in Muslim countries solely because they are Christian. All the Christians being murdered while the rest of the world watches and does…nothing. The end of every human biography is death . . . which is sin’s ultimate payoff.

So how is this for a happy sermon? You all out there wondering if I am ready to retire or if I need a really long vacation? Well, you know this is not how the story ends. This is not how the sermon ends. Into this world God comes to save.

His bold words give troubled hearts peace. God tells us at the beginning of our text, “Be strong; fear not!” (v 4). When God says “fear not,” pay attention. When God says “Don’t be afraid, ” listen to Him, for this is not some empty platitude. God does not speak to us with fortune cookie sound bites. This is more than a command; it is a word that in itself throws fears away, for God Himself is acting/doing. In both the Old and the New Testaments, God announces His saving actions with words that tell anxious hearts “Don’t be afraid.”

He says to Israel, “Fear not, for I have redeemed you; I have called you by name, you are mine” (Is 43:1b).
Through the angel, He proclaims to Bethlehem’s astonished shepherds, “Fear not, for behold, I bring you good news of great joy that will be for all the people” (Lk 2:10).

The risen Lord speaks to those confused women on Easter morning: “Do not be afraid” (Mt 28:10).

And this is the message I am authorized to announce to you this morning: “Be strong; fear not.” God’s coming in the flesh to save you (Jesus!) is the cure for your fears.

With these words, God would like to remind you that He is not out to get you, but He is for you in every way (Rom 8:1, 31–39). If God were your enemy, would He show up here in flesh and blood and suffer and die on the cross to save you? Of course not! God the Father’s vengeance, His judgment on your enemies (sin, death, and the devil), was placed in and on Jesus Christ, who carried your sins in His body to the cross and has answered for them with His own blood. Raised from the dead, He speaks to you the word of another judgment. It is the absolution: “Your sins are forgiven.” Jesus Christ is your Rescuer. He comes to do what the prophetic Scriptures of the Old Testament promised. This good news for you and for all creation is echoed in our text.

A Lutheran theologian of the last century, Werner Elert, said, “Some live in the light of the Last Day, others live in its shadow” (Elert, Last Things [St. Louis: Concordia, 1974], 28). My friends, my brothers and sister, redeemed children of God, you live in the light of the Last Day, for the Savior who has come into this distressed and dying world is your Brother. He will come again and with Him He will bring new heavens and a new earth, the home of righteousness (2 Pet 3:13). In the meantime, we do not wait all shaking and trembling at all that might happen on this world of ours. We do not wait, shaking at the sound of every rustling leaf in the late summer/autumn wind, but instead we wait as those saved in body and soul by Jesus Christ the crucified and risen Savior. He says to you once again, “Be strong; fear not! Behold, your God will come with vengeance, with the recompense of God. He will come to save you.” That is a promise you can trust, for God is faithful, and He already did it.