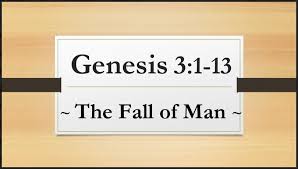 This morning we are going to start a little something. I am going to do some sermons this summer on Old Testament stuff that you may have never known, or you have not thought about, in a long time. Today we begin at the beginning, with Adam and Eve.

I begin all of this by asking you a question: Who or what is the biggest killer of all? World War II? 50 million dead. Smallpox? 300 million dead in the 1900’s alone. Cigarettes? One in 10 folks today die because of cigarettes. These are all bad things, but there is one that is worse, and that is sin. The truth is…SIN KILLS EVERYBODY. Today we will talk about how all that started.

There are a lot of people running around in the world these days who say that the whole Adam and Eve, Garden of Eden thing is just a fairy tale. There are a lot of folks running around these days who say the same thing about God creating the heavens and the earth. We are a church that believes what the Bible says. I am a pastor who believes what the Bible says. So we are going to start this morning with the premise that God created everything in 6 days, and rested on the seventh. And we believe these things to be true because the Bible says this is what happened.

Backing up a little, God created the whole universe in 6 days. And don’t get hung up on that…if God can make something out of nothing (which we cannot do according to the laws of physics), we shouldn’t put it past Him to be able to do a whole universe in 5 days. On the sixth day, God made Man, from the dust of the earth, in His Image (which means sinless by the way, not that Adam looked like God). God created Adam with His hands, not His words, and put him in a nice garden where everything was perfect. He was told to tend the garden, name all the animals, and not eat of the Tree of the Knowledge of Good and Evil. If you are wondering why God allowed that tree there, remember that God gave mankind free will, He did not create robots. And God looked at everything He had done and said it was good.

Adam hung out in the garden…he cut the grass, trimmed the bushes (he didn’t pull any weeds, there weren’t any…yet), but God realized Adam was lonely. Picture the absolutely best day you ever had, whatever that is, and now picture it alone, with no one you love to share it with. This is how Adam first felt in the Garden. This is when God put him in a deep sleep and made Eve out of one of his ribs.

Things were good. Things were great. Things were perfect…until they weren’t. They were given one rule, just one rule, don’t eat from THAT tree. One rule. We live in a world that is full of rules: don’t swim after you eat, don’t walk under a ladder, don’t eat your dessert first, wash your hands before you eat, don’t wear a brown belt with black shoes. Right? The Israelites had 10 rules. Adam and Eve had one. And they couldn’t do it.

The Bible tells us one day Satan, an angel who rebelled against God and started his own little empire, entered the garden disguised as a snake, and had a little conversation with Eve. Eve should have been suspicious because the only things that could talk in the Garden were Adam, Eve, and God. In this conversation Satan told Eve that when God told her and her husband not to eat of the Tree of the Knowledge of Good and Evil, it was not to protect them, it was not to maintain perfection, it was because God wanted to keep them from becoming like Him. In other words, he lied.

Eve started to think about this. Who wouldn’t want to be a god? But here is the problem; the real first sin wasn’t that she ate that fruit…the real first sin was that she doubted what God said, that she didn’t believe what God said. Just like every sin is a violation of the First Commandment because we put our will and desires ahead of God’s. Eve looked at that fruit, and NOWHERE in the Bible does it say it was an apple. It was fruit…don’t know what kind. But the Bible tells us it looked good, and she ate it. Then she gave some to Adam, and he ate it. And the game was over, the earth and everything that was in it was ruined, and paradise was lost. Because of what they did, not only did sin enter people but it entered the whole creation. Sickness and disasters were now part of the picture.

Now one of the things I am going to find out when I get to heaven, I am going to ask Adam, God, somebody this question: How long did it take for Adam and Eve to sin? A week? A month? A year? A millennium? Was it an hour? This is one of those things that really don’t matter but that I want to know.

Anyway, Adam and Eve sinned. They hid from God. This was really stupid. God created the whole universe and them, and they thought they could beat God in a game of hide and seek. It would be like you hiding from the rest of us here in this room by putting a napkin on your head. God was looking for them and asked them what’s going on. Now to show you how quickly things changed from everything being perfect to everything being messed up, Adam comes out and says, “It was HER fault. She did this to me.” Oh, and he not only throws his wife under the bus, he does it to God, too. He said, “This woman you gave me…” Adam was a real standup guy, right?

Then Eve said, “Hey, not my fault…The devil made me do it.” And God threw them out of the Garden, and childbirth now was going to be painful, farming was going to include weeds, and life was not perfect anymore.

But before they were thrown out, God promised He would fix what they messed up. He promised a Savior. God said, to Satan,

And that promised Savior did show up, around 4000 years later, as a baby born to a girl who never had relations with a man, a boy named Jesus who never did anything wrong, who was crucified by the Romans even though He never did anything wrong, and then on Easter Sunday rose again and won for us and gave to us, Faith, Forgiveness and Eternal Life.

The Good News is that Jesus is the One who comes to our rescue, He crushed sin, death and the devil just like God the Father said He would in Genesis 3:15. All of our sins…original sin and actual sins…are forgiven. Jesus beat death, and because He beat death these things which wear out now because of sin, will be resurrected on the Last Day when Jesus returns. As believers in Jesus, we know we are still sinners.

But we are forgiven sinners, and we now have hope.

Sin is the leading cause of death in this world. We know this. But there is a cure for this terrible thing. And we know what it is: it is Jesus, crucified and resurrected. When the Holy Spirit works that faith in Him in here, we are cured. Sin, Death, Satan, and Hell are all defeated by what Jesus did, and by what God gives. That is our hope. That is our joy. Now and forever.