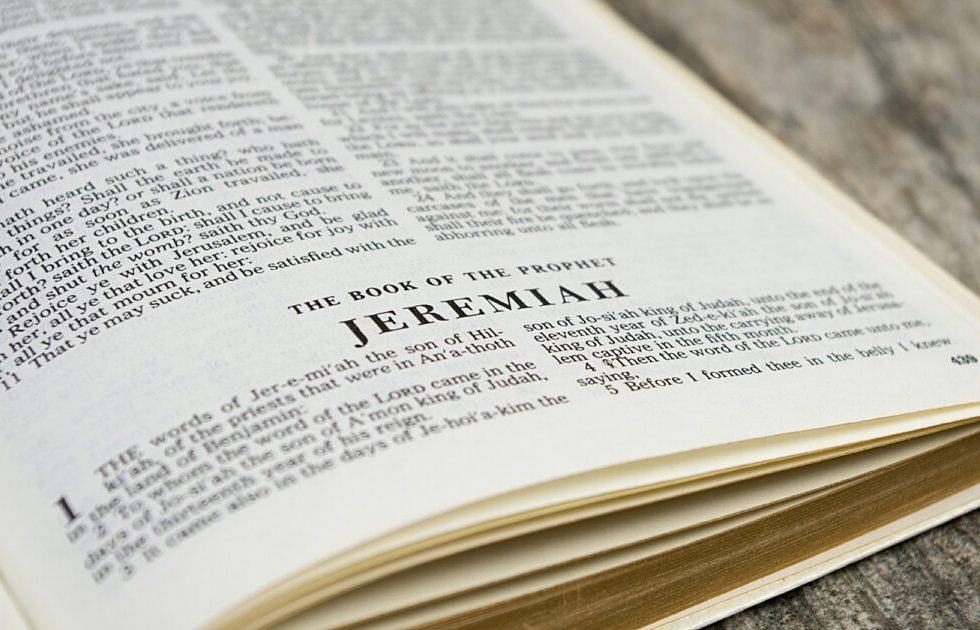 First of all, today is Father’s Day so happy dad day to the dads here and watching at home. Have you ever had to say something to someone that they didn’t want to hear? That’s no fun. For example, did you ever come home with a report card that had a letter on it that was not the first, second, or third letter in the alphabet? When my father had surgery to remove his prostate cancer in 1992, my mom appointed me the one to tell him, when he came to after the surgery, that they were not able to remove it. As a police chaplain, I have had to tell folks that their spouse, their child had been killed. These things are not fun. And Jeremiah was in that position some 2500 years ago.

Jeremiah’s life was not working out as he expected. Life started ok for the prophet. He was born during the reign of one of Judah’s good kings, Josiah. He came from a priestly family and probably began his work as a prophet at about eighteen years old. That was unusually young. Usually you had to be thirty before you started that kind of work. And the Lord had given him incredible gifts. Jeremiah was a good pastor/prophet. God made Jeremiah tough. The Lord described him as a wall of bronze (1:18; 15:20). God spoke directly to him. He made Jeremiah wise, insightful and passionate. And all of that made him very unpopular.

Why was that? Jeremiah preached the Word of God. But no one wanted to listen. False prophets assured the people that God was a supporter of their sin and Jeremiah was just grumpy. The people had abandoned the Lord and turned power and money and pleasure into their gods. They claimed to know the true God, but they worshiped false gods and demanded that the church and the prophets change God’s Word and declare them righteous. Now does what he saw sound familiar? Jeremiah lived around 600 B.C., but things today are kind of the same.

Jeremiah was doing what he was supposed to be doing. But the people he was serving were making his life miserable. Jeremiah was upset by all this and said to God, You “deceived me, you overpowered me.” The Hebrew word the ESV translates “deceived” might be better rendered “enticed.” He was telling God that being a prophet should not have been that hard. Jeremiah felt like he had been led into a trap. And to make things worse, Jeremiah’s family and friends abandoned him. He was alone in the world. Because he knew what he knew he didn’t enjoy much here because he knew the death and destruction that was coming with the Babylonians. He lived in evil times and the last years of the Kingdom of Judah. He was bummed, because he was saying the right stuff, but no one was listening. Jeremiah was doing what God told him to do, in terms of his preaching, but it wasn’t going well for him at all. He felt abandoned.

For Godly people, it’s easy to feel this way. The world does not love Jesus, and respect for the Word of God has dropped quickly in recent decades. It would be far easier just to be quiet and not have to listen to the anger that is sometimes thrown at Christians.

In the time since I got ordained, there has been a huge swing in this country in terms of the influence of the Church, people believing what the Bible says, and so forth. The change has been stunning. Internet trolls, interest groups, and TV talking heads criticize the churches that uphold the Word of God saying God created the world, there is universal truth, there is only one Savior, and so on.

Christians have been sued, and judges have awarded six-figure damages to those whose Christian bakers, florists, and pizza shops refused to deny their faith by servicing gay marriages. There are real costs for standing up for your faith, even in the USA. Politicians criticize Vice President Pence’s wife, Karen, for teaching at a Christian school. In Canada, hate speech legislation passed in April 2019 has criminalized even the Bible’s condemnation of anyone’s “sexual behavior.” It would be far easier to keep quiet and keep your head down, right?

Jeremiah had the same experience. How does someone hold to God’s Word in times like this? The first step is to take Jeremiah’s experience seriously. Even though he felt like it, he did not stop proclaiming God’s truth. Today’s reading quotes him: “If I say, ‘I will not mention him, or speak any more in his name,’ there is in my heart as it were a burning fire shut up in my bones, and I am weary with holding it in, and I cannot” (v 9).

It gets to the heart of our lives and purpose. God did not leave His people, His Church, here on earth to fit in with the masses. God’s Message is so different than what those who have rejected Him think is important. God’s Word, the Bible, is the Right Message. It’s right not only because it’s true but because its purpose is to save the world from its…how shall I put this…lack of wisdom. (“The fool says in his heart, ‘There is no God.’” Ps. 14:1) If you love your children, spouse, friends, parents, and even your enemies, you should want them to hear and know this truth.

The Lord loves His children, and that’s why this Word has been proclaimed in every generation. He will not let it die. He will not let it go unheard. He will not allow it to return to Him empty without accomplishing the purpose for which it is sent. That doesn’t mean that we won’t have to deal with the folks who disagree with us/who are deceived, but, like Jeremiah, we deal with the stuff they throw at us knowing that we will be vindicated: “But the Lord is with me as a dread warrior; therefore my persecutors will stumble; they will not overcome me. They will be greatly shamed, for they will not succeed. Their eternal dishonor will never be forgotten” (v 11).

I do not know if you have ever thought about it in these terms, but we make a mistake if we believe we are on earth to be comfortable and satisfied. (That’s part of the promise of heaven, not earth.) Those who speak the Lord’s Word are in a battle for the life of the world. It’s not really an option to keep our heads down or our eyes down. We have to be the light shining on the hill, the beacon of love and hope to people who don’t have that.

It is only when we understand what’s at stake that the course of action becomes clear, and the way we are to live becomes a creed. We pray that our heavenly Father would deliver us from every evil of body and soul, property and honor, and finally when our last hour has come, that He would graciously deliver us from this place of tears and take us to himself in heaven. We proclaim the blood of the risen Son of God, which overcomes sin and death and the power of the devil.

And before we do that out there, we need to be equipped in here. The message we proclaim is not only for the world out there that doesn’t get it. It’s for us who do. We need a Savior, not just from the world but from ourselves and the wrath we’ve earned. You know, because we sin. Before we deal with what’s out there, we need to remember and understand our deep need as well. The church is the home of sinners who sin. That’s what we start with here every Sunday.

But the church is also the home of forgiveness and peace won/done for us by Jesus Christ’s death and resurrection. Done by our Father’s unquenchable love and poured out on us by the Holy Spirit through Word and Sacrament. We reach out with the world’s only hope because we have already received the cure that cures sin/cures souls. (So much talk today about a COVID-19 vaccine, and that will be great if/when it happens. But God has already cured us of the disease of sin, which everybody gets and is fatal. We have been vaccinated with the righteousness of Jesus earned for us by His death and resurrection.) Our sins are forgiven, and we get to share that undeserved gift.

Know today that this prophetic Word is made more sure for us. “Sing to the Lord; praise the Lord! For he has delivered the life of the needy [who cannot save themselves] from the hand of evildoers” (v 13)—and us from our own sins!

Don’t be bashful. Don’t be shy. There are folks all around us who do not want to hear what we have to say. We need to say it anyway, because everyone needs to hear it.