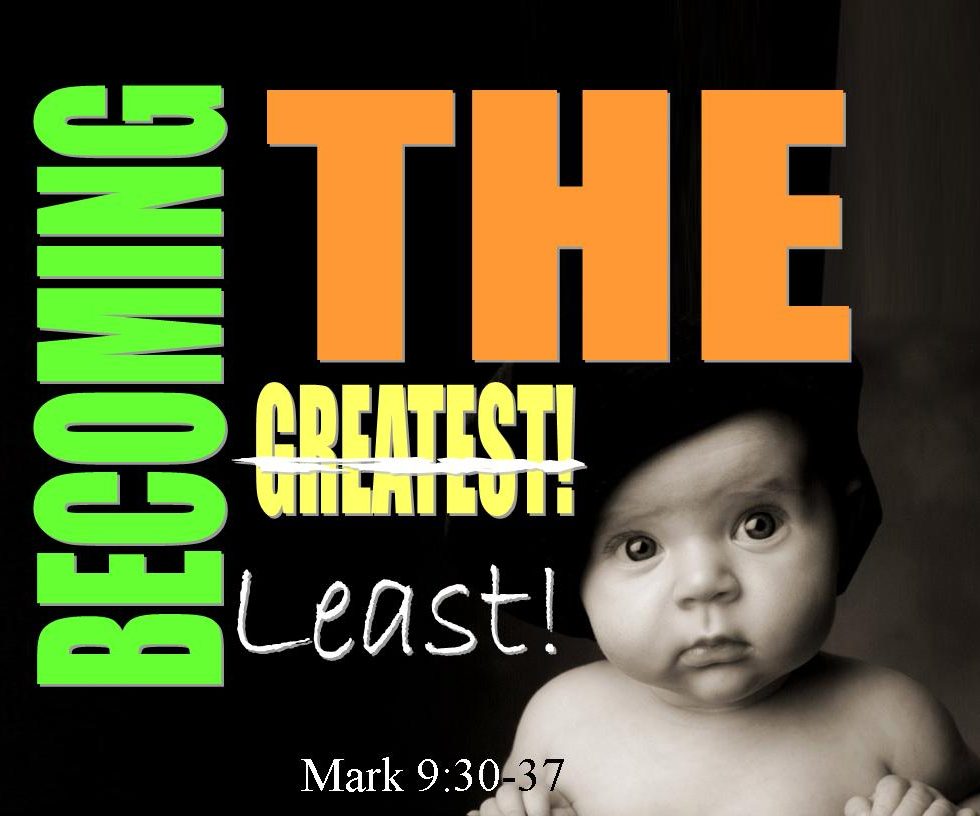 If you like sports, and you know that I do, you know how exciting this time of year can be: we are back on the road to the Super Bowl and the College Football Playoff, baseball has the pennant races (and the Milwaukee Brewers are going to the playoffs!), NBA and NHL are about to start up. But that is not the only competition we are involved in. We don’t just watch, we compete ourselves. Not just on a golf course, or a tennis/pickleball court. We compete with co-workers, siblings, friends, neighbors. We try and sell more than our co-workers. We might try and have the best car or the best house on the block. You might decide this year you are going to have the best Christmas decorations on your street. You know what I mean.

Yet God’s Word switches our focus from competing with others to serving them. Our first inclination, our first thought, is to want to be first, on top. But the theme for our Gospel lesson today tells us we need to seek service, not being served. Today, we are going to discuss how Jesus is the “Servant of All.”

Are you basking in the limelight? Are you a big-time celebrity? That status is out of reach for most of us. I would argue that the biggest celebrity we have in this church is Rufus. We are of the common people. Right?

While we may not be celebrities, while we may not be well known outside of our homes or offices, Jesus is still talking to us. “If anyone would be first” (v 35). This is being said to us. We can all be selfish. We can all be caught thinking we want to be served. We like to receive preferential treatment. Going ahead of others, taking precedence over others, pulling rank on others is something we may do a lot of, and not even realize it.

There is one time Erica and I traveled by air and got to fly first class. Delta canceled our flight to go see my family in Florida at Christmas and when we rebooked, I asked for an upgrade and got it. Loved the legroom on the plane. Loved being served actual food and not just a bag of peanuts. But the best thing was when it was time to come home, there was a huge line to check in, and we got to skip it and check in with the first-class agent. There was no line there. It was funny seeing all the other folks giving us the skunk eye as we walked past them. We all like that, want it, crave it, right?

The apostles were the same way. Going to our text, Jesus’ apostles were coming off a letdown. In a village a few miles back, they had not been able to cast out a demon in a young boy. They were frustrated because Jesus had commissioned them to heal the sick and to cast out demons (Mk 6:7–13). But for that boy, they were helpless. They could not get it done. They were not so great. Jesus saved the situation. He drove away the demon. The Lord rescued the boy. We read that in last Sunday’s Gospel.

After that incident, Jesus went on with His apostles through the territory of Galilee. Some distance into their trip, Jesus reminded them He was on a journey to show servanthood. Not many days ahead, the Son of Man would be delivered into the hands of men. He would not resist, and they would kill Him. And when He was killed, after three days He would rise again (v 31).

Jesus’ prediction should have toned down the apostles’ bickering about their own greatness. Arriving at Capernaum, probably at Peter’s home, Jesus asked, “What were you discussing on the way?” (v 33). They were put on the spot. Because what they had been talking about was which of them was the best, the greatest, which apostle was going to get the book deal, who was going to do a reality show on the Bravo channel, who was going to try and get on Big Brother, that sort of thing. It may have been suggested that the money-handler was the most trusted. Why else would Jesus have placed His trust in Judas? Yeah, Judas was the treasurer. Can you imagine an argument being made that he was the best apostle? At any rate, Jesus was talking about serving, they all wanted to be at the top of the church ladder.

We know how this works. We know because it is aggravating to have the number 39 at the store when the person being served at the counter holds number 6. We are mad when people get ahead on their personality or their good looks while we work and improve our skills and gain experience only to be passed over. We want to finish first, we desire to be waited on and catered to, we want the promotion, the better pay, we want to advance. We want to be number one.

We know how this works at church, too. How do we feel when something isn’t being done the way we want it or the way we like it? We may even think our feelings and desires are more important than the rest of the folks in the congregation. Be careful, because thinking this way is not something Jesus likes. That’s what He is telling us today.

Jesus said, “If anyone would be first, he must be last of all and servant of all” (9:35). Stunned? Such a saying—taking last place, serving others—is contrary to everything our selfish world is about, a total reversal of our ideas of rank and greatness. How are we to get ahead, how can we progress, how can we win this way, serving all, settling for last place in order to help others be first?

In the text, I can see Jesus shaking His head in frustration. He had spoken about His own servanthood, which included His death on the cross, and His apostles went on arguing who would be greatest among them. And we do not get it. We don’t catch on. The disciples needed a lesson. And Jesus obliged. A little kid runs through the room. Jesus grabs the little fellow, sets him in the middle of the 12, puts His arms around the child, and says to His misguided friends, “Whoever receives one such child in my name receives me, and whoever receives me, receives not me but him who sent me” (v 37).

Jesus is the greatest because He is the Servant of all. We see in Jesus what anyone would be compelled to call greatness. He is revealed in His miracles and teachings to be the Son of God. He is revealed in glory on the Mount of Transfiguration. If you see the Jesus of the Gospels, you see God.

But Jesus’ true greatness was now to be revealed (v 31a). Jesus was handed over into the hands of men. He was physically beaten and abused by their hands. He was submitted to the schemes of evil men. They killed Jesus. He suffered the ultimate physical punishment: slow and painful death. But Jesus suffered this to be the Servant of all. His life was offered as a ransom for the whole world. His life was offered as a ransom for your sins. Your pride is forgiven by Jesus, who serves you.

Jesus whipped, flogged, bleeding, crucified. Call that greatness? You bet! Jesus, Servant of all, would then be exalted—His greatness in humility confirmed—in the resurrection (v 31b). Three days after His death, He rose from the dead. Jesus shows us how to serve. Jesus shows us how to love. But He really showed us how to conquer Death and Sin because He is still alive. He rose!

When I play my Playstation, shoot pool in my man room, throw a golf disc, run a 5K, I like to win. I’ll bet you do, too. And that’s fine. But in real life, Jesus has a different way to go. Every avenue of life where we live, where we work, here in church, in our homes, is an opportunity to gather before Jesus and hear His words, “If anyone would be first, he must be last of all and servant of all” (v 35). It is the way to live, the way to win, the way to be first.

Love. Give. Serve. Jesus did it all for us. Now we get to do that, too.