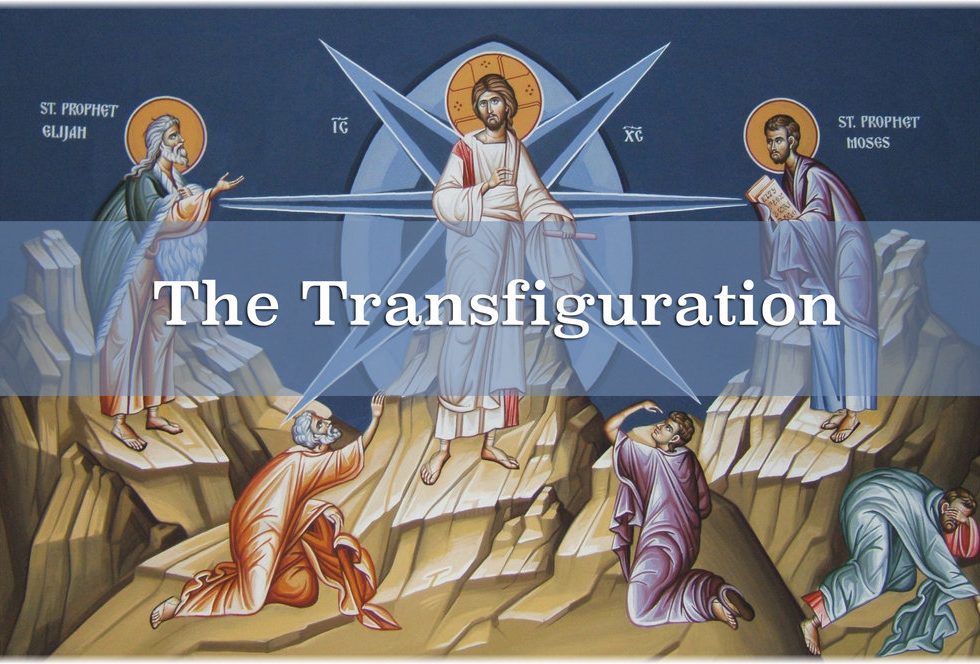 “History for two thousand, Alex.” “This John, born in Antioch in 347 AD, has attributed to him the last name that means, ‘Golden-mouthed.’” The answer? “Who is John Chrysostom?” John was a common name, but this John was not common. He prepared for a career in law. But at the age of 23, John learned about Christ, was baptized, and abandoned the law in favor of service to the Savior. From the pulpit, he was such a good preacher that his reputation went all throughout the Christian world. His popularity earned him election as the Patriarch of Constantinople, from which he launched a crusade against greed among the members of the Church. John’s sermons and letters, liturgical works, and Bible commentaries were so great that when he died, John was given the last name, Chrysostomos or Chrysostom, which in Greek means the “golden-mouthed.” And we’ll get back to him in a minute.

Today is the Transfiguration of Our Lord, the final Sunday before Lent, and one of the best moments of the Gospels. It’s really the culmination of everything that began with the birth of Jesus on Christmas. Concerning the transfiguration, the apostle John ties it to the Lord’s birth: “And the Word became flesh and dwelt among us (Christmas), and we have seen his glory, glory as of the only Son from the Father, full of grace and truth (Transfiguration)” (Jn 1:14, parenthetical information added). Peter refers to the Transfiguration in his epistle too: “We were eyewitnesses of his majesty. For when he received honor and glory from God the Father, and the voice was borne to him by the Majestic Glory, ‘This is my beloved Son, with whom I am well pleased,’ we ourselves heard this very voice borne from heaven, for we were with him on the holy mountain” (2 Pet 1:16–18).

St. John Chrysostom understood this mountaintop experience, even though he lived centuries afterward. And he wrote about it. Your sermon title here today is something John wrote regarding our Gospel reading today: “A Strange and Most Glorious Mystery Do I See.”

When Jesus led Peter, James, and John up on that high mountain by themselves, what did they see? Our Gospel says, “He was transfigured before them, and his clothes became radiant, intensely white, as no one on earth could bleach them. And there appeared to them Elijah with Moses, and they were talking with Jesus” (vv 2–4). We can only imagine what it must have been like for those three. What those apostles got was literally a glimpse of heaven. They saw that day what Jesus, Moses, and Elijah look like in heaven.

To see their friend Jesus literally glowing from His face and His body was a sight they could never forget. Then, to see Him conversing with Moses and Elijah in their glorified state was the kind of thing, the kind of perk, if you will, that the apostles thought they would get from hanging around with Jesus. This was quite a thing that they got to see.

Now if you have ever wondered why Jesus was on that mountain with Moses and Elijah, I have an answer for you. Moses, because of his own disobedience, died in the wilderness of Sinai without crossing the Jordan into the Promised Land. His death in the wilderness signifies that no one, not even Moses, can be saved before God by the works of the Law. Yet, here is Moses, glorified in heaven with the Messiah.
And Elijah, that prophet who restored to Israel the worship of the true God, he was carried away from this world in a flaming chariot, signifying salvation by grace alone through faith alone in the coming Jesus Christ alone. There is big theology behind those two standing there with Jesus.

Having noted that, I remind you this is everything the disciples hoped for in their Lord Jesus. So, it’s no wonder that Peter cries out with joy, “Rabbi, it is good that we are here” (v 5).
But then something happened that changed the enthusiasm of those apostles: “A cloud overshadowed them, and a voice came out of the cloud, ‘This is my beloved Son; listen to him’” (v 7). The account in Matthew 17 adds that “when the disciples heard this, they fell on their faces and were terrified” (Mt 17:6).

Why did their joy turn to fear? The same thing was experienced by the prophet Isaiah when he came into the full presence of God: “I saw the Lord sitting upon a throne, high and lifted up; and the train of his robe filled the temple. Above him stood the seraphim. . . . And one called to another and said: ‘Holy, holy, holy is the Lord of hosts; the whole earth is full of his glory!’ And the foundations of the thresholds shook at the voice of him who called, and the house was filled with smoke. And I said: ‘Woe is me! For I am lost; for I am a man of unclean lips, and I dwell in the midst of a people of unclean lips; for my eyes have seen the King, the Lord of hosts!’” (Is 6:1–5).

You see, even though we believers want to be close to God on this side of heaven, we are still sinners. Remember what happened to Adam and Eve when they chose to follow the word of the serpent instead of the Word of God? “Then the eyes of both were opened. . . . And they heard the sound of the Lord God walking in the garden . . . and the man and his wife hid themselves from the presence of the Lord God. . . The Lord God called to the man and said to him, ‘Where are you?’ And he said, ‘I heard the sound of you in the garden, and I was afraid . . . and I hid myself’” (Gen 3:7–10).

We have been hiding in fear of God ever since. The children of Israel in the wilderness feared the sight of God as He appeared in a pillar of fire. They feared His thunderous voice coming down from heaven. As great as the prophet Isaiah was, he was filled with fear before the majesty of the “holy, holy, holy, Lord God of hosts.” When the voice of God the Father thundered from heaven, Peter, James, and John were filled with fear on the Mountain of Transfiguration.

But as quickly as that thundering voice from heaven made them fall on their faces and recoil in fear, just as quickly it was all over: “Jesus came and touched them, saying, ‘Rise, and have no fear.’ And when they lifted up their eyes, they saw no one but Jesus only” (Mt 17:7–8). What had changed exactly, that they were no longer afraid?

Moses and Elijah were nowhere to be seen. The Father’s BIG voice was no longer heard, even though the words of that voice were still fresh in their minds. Jesus was still there with them, no longer transfigured, to be sure, but it was the same Jesus, whom they now knew without a doubt to be God’s “beloved Son, with whom [God the Father was] well pleased” (Mt 17:5) They knew Jesus was the guy they should be listening to. In a way, nothing had changed. Only the divine glory and majesty of God was again veiled. But now they knew for certain that behind the veil was everything they’d hoped for. And even though now “they saw no one but Jesus only” in the humble form by which they could look at Him, they could say in the words of the golden-mouthed preacher John Chrysostom, “A strange and most glorious mystery do I see.”

(Preacher) John Chrysostom takes the transfiguration of Jesus a step further and applies it to us. He understood that in this life our eyes cannot look at the divine majesty. Even in the transfiguration, the apostles were given only a glimpse of their Lord’s full divinity. As Chrysostom says, “even then he did not display to us all the splendor of the world to come. . . . But at that time on the mountain he disclosed to them as much as it was possible for them to see without injuring the sight of the beholders, and even so they could not endure it but fell upon their faces.” Preacher John reminds us that those three apostles had a literal mountaintop experience.

The great cathedrals of the Church were constructed as places of grandeur where the people could go for just such a mountaintop experience, to get a glimpse of the world to come. The liturgy would lead them from the depths of sin and death, as we begin today with confession, but then the service would lead us to Jesus, and the Good News of His death and resurrection for our sins.

The high point of the transfiguration was not the glorious glimpse of heaven, which sent the disciples falling on their faces. It was when Jesus veiled Himself again, touched them with His humanity, and comforted them by removing their fear. For from here, Jesus will go quite directly to the cross, where He will die to take away their reason for fear. Oh yeah, and rise again!

The same is true of the Divine Service of the Church. The high point isn’t the Law of Moses thundering away in the Old Testament. It is not the words of your pastor and his sermon. The high point is when Jesus veils Himself again in simple bread and wine, touches you, and says, “Do not be afraid . . . take, and eat and drink my body and blood given on the cross for the forgiveness of your sins.”

This is what John the golden-mouthed meant when he said, “A strange and most glorious mystery do I see.” God doesn’t do things the way we would do them. In Jesus, we are dealing with God and man in the same person, and He does things and did things that we, with our puny brains, cannot truly comprehend. But He did them. And He did them for us. It is hard to figure out why He loves us like He does. It is hard to figure out how He does what He does. It is a mystery. But it’s a good one. Because Jesus did all He did for us, we are forgiven, saved, and we do not deserve it. “A strange and most glorious mystery do we see.”