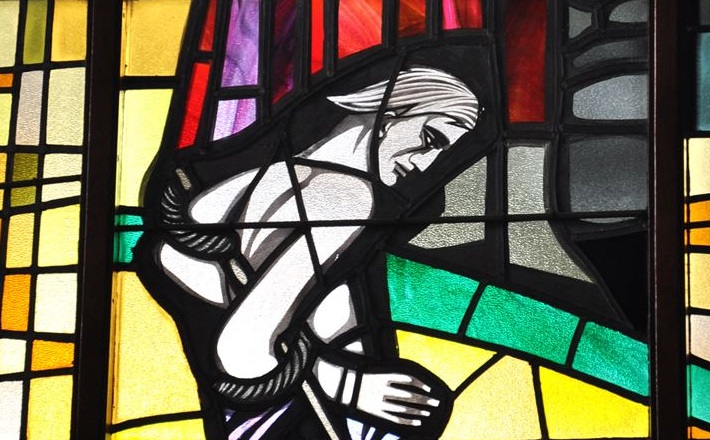 Do you feel like you fit in? Do you feel like you are one of the “in”crowd? There are a lot of tv shows, movies, books, songs out there that discuss the issue of feeling like one does not belong to the group, when people feel like outsiders. Some obvious examples can range from Pink Floyd’s The Wall to The Catcher in the Rye to The Breakfast Club to anything with a super-hero in it. Now I figure most of us have felt this way at some time, and it is a common experience for folks growing up. There aren’t too many people I have run into who have always been happy, well adjusted, and in with the cool kids, if you know what I mean.

In the Gospel today, in Mark chapter 3 Jesus is already well into His ministry of preaching, teaching and healing. The Gospel of Mark does not mess around, the action moves pretty fast. When we join the narrative here, Jesus has picked His 12 apostles and it says in verse 20 He has gone home. Now this can mean two places, His home in Nazareth or His base of ministerial operations which was Peter’s home in Capernaum on the Sea of Galilee. As your house theologian, I believe this was Peter’s house, but my Greek research says that we cannot be certain if it is Peter’s house or Jesus’ house. At any rate, while they were there a huge crowd followed and crammed into what I think is Peter’s house again, there were so many folks there that Jesus and the twelve couldn’t even have dinner.

Next, we have the section where Jesus is accused by the scribes to be working as an agent of Satan. This is because Jesus had the nerve to say that the rules the Jewish hierarchy came up with and added to God’s Law were not equal to the laws God gave Moses. Jesus responds to their accusation by offering the now famous quote, “A house divided against itself cannot stand.” You may have been taught in history class in school that Abraham Lincoln incorporated that line into one of his famous Civil War era speeches.

Then we have Jesus telling off those scribes by informing them that the only unforgivable sin is the sin against the Holy Spirit. I remember when I was a little kid, asking God not to send me to hell if I happened to do this accidentally. The good news is you can’t really do this by accident. Our teaching here is that this sin is the unyielding refusal to believe the Gospel, a persistent rejection of the Holy Spirit’s work to create faith in Jesus.

And that brings us to what I want to emphasize here today. At the end of the reading as Jesus is teaching and doing His thing, His mother and step-siblings arrived. While there are churches out there that teach that Jesus is the only child of Mary, the Bible does clearly teach that Mary and Joseph did have children after Jesus was born in Bethlehem. The Bible tells us they had four boys: James, Joseph, Simon and Judas, as well as some unnamed daughters (Matthew 13:55). We saw earlier in the text that they were coming to get Jesus and take Him back with them because, in their view, “He is out of His mind.”

Apparently quitting your family business to go off and start preaching is considered by some to be a little bit crazy. Now they have arrived at Peter’s house and the word is passed along, since Mary and the gang could not get in, (the word is passed along) to Jesus that they have arrived. Jesus looks at those listening to Him and basically says, “You are my brothers and sisters. For whoever does the will of God, he is my brother and sister and mother.”

We started this morning with the question of do you ever feel like you do not belong. There are a lot of different ways we can illustrate this feeling like we are on the outside thing. We are Lutherans in a state that is 30 percent Southern Baptist (and yes it feels like more than that). On the internet I saw that according to Pew Research, 66 percent of adults in Oklahoma City consider themselves highly religious. Of that two-thirds of our population, 40 percent identify as Baptists. Do you feel outnumbered? Feel like you are on the outside? Maybe you think you are outnumbered in terms of your political beliefs. Maybe you look around and think all the people around you are lacking common sense, as common sense is not very common these days. Maybe you feel outnumbered in terms of your favorite sports team. Maybe you are still a VHS person in a DVR world, or a flip phone person in a smart phone world. There are any number of ways we can feel like we are on the outside looking in.

Jesus obviously had those days. His younger siblings, whom He had lived with all His life, thought He was nuts because He had begun this ministry. If we first look at this from their perspective, being the younger siblings of Jesus would be tough. I remember being asked by teachers if I was the younger brother of Scott Erler and being told that he was a tough act to follow. Imagine having Jesus as an older brother. He always did as He was told. He always made His bed, did the dishes, cleaned His room, took out the garbage, fed the cat, put His phone away, and never talked back to, sassed, or disobeyed His parents. Now THAT is a tough act to follow.

After decades of this, one day Jesus just ups and leaves, and begins preaching and teaching and healing. And His family, who still expect him to be making furniture and running the business (remember, Jesus was the oldest…He would have been in charge after Joseph died) tried to get Him back and bring Him home. And since Jesus is Jesus, He wasn’t lousy at doing anything, right? He was probably pretty good at making furniture, and His leaving may have been costing the family money.

So how would you feel if you were doing what you were passionate about, it was something that helped move forward the Kingdom of God, and your family came along and said, “Stop this…this is nuts!” I know when I became a pastor there were those that I knew who looked at me funny, and were, like, “Say what?”
But Jesus is the Son of God here, doing the business of God the Father, and these folks He has known for years tell Him to quit and think He has flipped His lid. How lonely He must have felt that day. How sad. And how sad they must have been when they realized He was not coming home. And how happy all the people in the room there with Jesus must have been when they heard that if you do God’s will, if you believe in Jesus, Jesus is your brother!

Here is what I want you to remember this morning. We have all had moments, days, years where we felt like we were somewhere where we didn’t fit in, didn’t belong. I think there are many of us who have looked at our families, when we were young, and we wondered if we were adopted. There may have been times where we have looked at everyone else in a room, felt like we had nothing in common with those people, and wondered if we were in a room full of aliens from another planet. Yes? Whether it is at home, at school, at work, at a party, at a concert, we have all been there. So it is with Jesus. He knows how you feel. And this isn’t like when someone you kind of know says, “I know how you feel!” when there is no way they really do. Jesus really does. He knows how you feel.

And He has a message for you today. He says we are His brothers and sisters. He says He will never leave us or forsake us. He says He is with us always to the very end of the age.

And we are reminded today that since He died and rose for us, since He has won for us the forgiveness of our sins, since because of Him we now have eternal life, then when He says He is with us, He is with us. And as St. Paul said to the Corinthians, “…we do not lose heart.”