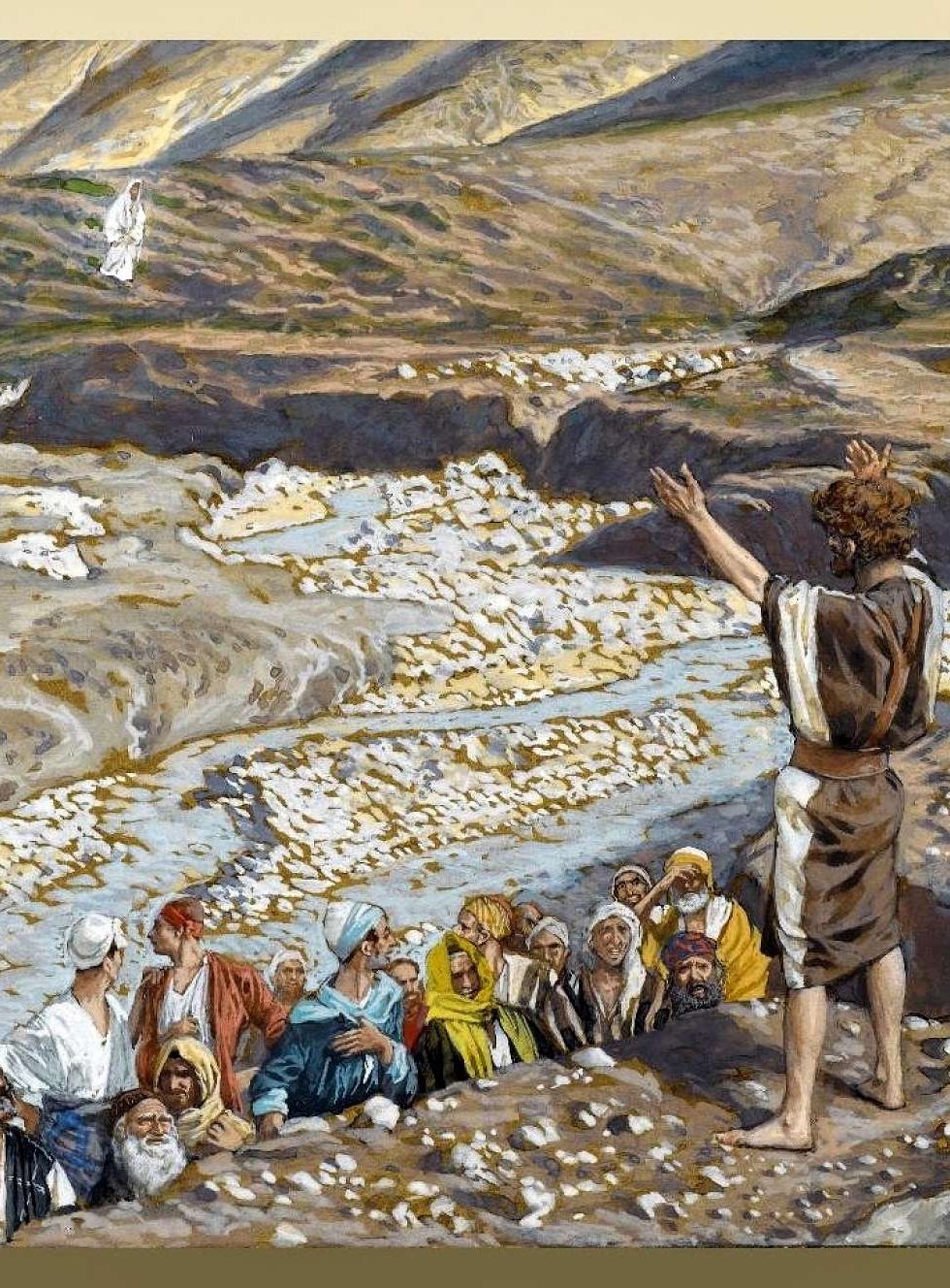 This is a time of year that when kids are in the toy stores, or on the internet, or watching TV, that they do a lot of pointing.  They will say, “Hey!  I want that!”  Hey! I want that: Baby Yoda (Grogu) Plushie, Artie 3000 Coding Robot, Ultimate Walking Buzz Lightyear, Call of Duty Cold War, Playstation 5, Xbox Series X, or a 4.4 L V8, 617 bhp, 2021 BMW M5.  I didn’t say the kids had to be young.  And for us parents, hearing those voices can be a little hard on the old patience machine.  In the Gospel lesson we have John the Baptist again.  Last week we talked about his ministry in general, today we get a little more specific.   This week we focus on John the person, as a voice calling in the wilderness.  He was a voice preaching Jesus Christ, the light of the world.  He was a finger pointing to Jesus and saying, “There He is, the One you’ve been waiting for.  Behold, the Lamb of God.”  Today John is not weird John.  Today John is a “Voice and a Finger.”

Ancient Christian art that has been discovered over the years shows John as having a great big mouth and a pointy finger, pointing to Jesus.  A big mouth and a finger, that was John.  When we were kids, we were taught it is impolite to point.  I remember being told, “When you point, most of the fingers point back at you.”  Having a big mouth isn’t any better, right?  No one ever said to me, “You’ve really got a big mouth” and meant that as a good thing.  But John was a witness–a mouth with a voice, a finger pointing to another.

John the Baptist was sent by God.  That’s the first thing we must know about John.  He was sent.  Before he was born it was a done deal.  The angel Gabriel said so.  John was sent from God to give testimony, which is all that a good witness is supposed to do.  His message was not “Follow me.”  It was “Follow Him.”

The problem is that sometimes we tend to confuse the witness with their testimony, confuse the message with the messenger.  We often pay more attention to the person than what they say.  The religious leaders of Jerusalem were stuck on the messenger.   John caused quite a stir.  They sent a committee to ask John, “Who are you?” or more likely “Who do you think you are?”  John said, “I am not the Messiah.”  No delusions of grandeur there.  They asked then, “Are you Elijah?”   The popular expectation was that Elijah would return on the fiery chariot he left on and announce the coming of the Messiah.  John looked the part, but told them, “I am not Elijah.”  (He was a second Elijah, a new Elijah, but not THE Elijah.)  They asked, “Are you the Prophet?”  Moses said that God would raise up for them a prophet from among his brothers.  Some were expecting that person to be some kind of Moses sequel.  John was the latest and greatest of the prophets but again he declines glory himself and says “No.”  His answers are getting short.  He is a witness to the light.  He wants to talk about Jesus, not himself.

John did that 2000 years ago, but he’s not here anymore.  We in the church are that voice and that finger in our world today, a world full of sin and corruption, scandal and fear.  A voice to proclaim repentance and forgiveness in Jesus’ name, a finger pointing to Jesus. “There’s the One for you.  There is your forgiveness, your life, your salvation.  There He is in the water of baptism.  There He is in the mouth of the pastor absolving your sin.  There He is in the bread that is His body, in the wine that is His blood.”  That is what being a witness to Jesus means.  Not pointing to ourselves and saying “Be religious like me.”  But pointing to Jesus in the Word, the water, the bread and the wine, and testifying on His behalf: “Behold the Lamb of God that takes away the sin of the world.” Your sin.  He died carrying your sin.  He rose again holding your life in His life.  That is the church’s testimony and her witness.  And we are the church.

One more thing.  As time passes and our culture changes, you have noticed, and we have talked about this, that there seems to be a Christmas war that we are fighting in our culture.  That we are fighting FOR Christmas. (Have you seen the reporters, politicians and bureaucrats out there saying, “Cancel Christmas!) You know what I mean, you watch a football game and it says “Season Greetings” instead of “Merry Christmas” on the score graphics.  Stores in their commercials saying, “Happy Holidays,” clerks checking us out being told not to use the word Christmas.  Schools going on Winter Break.  Schools holding Winter Programs, Winter Concerts, Winter Solstice Pageants.  The thought police out there saying, “We can’t possibly risk offending someone who doesn’t like that word.”  Well, there is some finger pointing and voicing that we can do this year.  When people around us are using the politically correct terms for this holiday, holy day, that is coming, we can use a voice that says “Merry Christmas” and a finger to point them the way to Jesus.  We can tell them, “I celebrate Christmas, the birth of the Savior.”  In 1965, Linus Van Pelt could see this coming.  He knew what Christmas was all about.

So brothers and sisters in Christ, take this to heart.  There are a lot of people out there living in darkness.  Jesus is the light, the light, who shines in this present darkness with a light no darkness can overcome.  Not even the darkness of our sin or the terrors of our death can overcome this glorious light who is Jesus.  And we, you and I, have the privilege, just like John, to speak of Him and point others to Him.

Best Christmas gift that we can give, right?  No batteries necessary.  No assembly required.