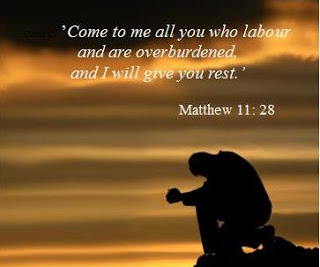 So how are you doing this morning? Fired up? Ready to go? Or are you a little tired? Coffee not kicked in, yet?

Well, what sort of rest do we need? Is it the rest we get with a day off from work to swim, eat food from the grill, and enjoy some fireworks? (And I have to be honest here, with July 4th on a Saturday this year, I do not know if any of you got a three-day weekend. And with Liberty Fest canceled, I don’t know how many of you saw fireworks.) Anyway…rest. Is it the sort of rest that comes with a family summer vacation? A week spent at the beach or taking in the sights of the Grand Canyon? Maybe it’s the sort of rest that comes with sleeping in. That is a kind of rest, and I’m fairly certain that none of us would complain if we got to do that. There is lots of stuff that wears us out. I think Erica would agree with me that the best vacation we ever took was doing the Alaska cruise thing. I found it very restful because the folks on the ship do everything for you. All you have to do is look at stuff, eat and sleep. It’s pretty cool. But is this the sort of rest Jesus is talking about? Is this what Jesus promises to give to those who labor and are heavy laden?

The answer is, well, no. He isn’t speaking of a rest that is simply taking a break from work. God does want us to rest, that is one reason He gave us the Sabbath, but you don’t need Jesus in order to have a day off. What sort of rest is Jesus promising to give? To answer this question, let’s take a closer look at the sort of person to whom Jesus promises to give this rest.

“Come to me,” Jesus says, “all who labor and are heavy laden.” When we hear these words, we easily understand the labor part. We understand work. The nature of our lives on earth, even before the fall, involves work. Remember, Adam and Eve had work to do in the Garden of Eden. Their life was not just eating ice cream while watching Netflix. But work didn’t stink for them. It wasn’t stressful. It didn’t make them sick, or angry, when they tended the garden. Work, in and of itself, is not a bad thing. It’s what we do as human beings: work the ground, work our jobs, work at school, work for our families, work to take care of the house. It’s what we do all our lives. But when sin came into the world, then work became hard/negative.

That’s what it means to be heavy laden—to know that the Law of God demands you to do stuff and, at the same time, to know you’ve been unable to do it. We know, when we are honest with ourselves, that we are sinners, we are not “good,” we have failed God and each other. The Bible says we have all sinned and fallen short of the glory of God. That’s why you are heavy laden. It’s why you are burdened in your conscience. You know your sin.

And this is why Jesus promises to give you rest. To see an example of this, we only have to turn to Paul in today’s Epistle: “I do not understand my own actions,” he writes. “For I do not do what I want, but I do the very thing I hate.” (Rom 7:15). Paul knew the Law. And Paul knew that the Law is good. Like you, Paul knew that, even though he tried as hard as he could, he could not keep the Law.

Paul goes on: “For I know that nothing good dwells in me, that is, in my flesh. For I have the desire to do what is right, but not the ability to carry it out. For I do not do the good I want, but the evil I do not want is what I keep on doing” (7:18–19). Clearly, Paul wants to do the Law of God. And clearly, he finds, day after day, he cannot do it. Like you, the wrong things he doesn’t want to do seems to be what he keeps on doing. Until finally, as a man whose conscience is burdened with his sin, he has no choice but to say, “Wretched man that I am! Who will deliver me from this body of death?” (7:24).

That, you see, is a man who has labored but who is also heavy laden. That is the very sort of person to whom Jesus promises to give rest.

To such a person, Jesus says, “I will give you rest. Take my yoke upon you” (Mt 11:28–29). Jesus is telling us that we find rest, and peace, in what He has done for us: His death, His resurrection. That is what He means when we are to take His yoke. We get His work and the benefits of His work. And that brings us rest.

That, you see, is the rest Jesus promises to give. Now He does want us to have physical rest. As I said before, that is why we have a Sabbath Day. But the rest He is talking about today is that He promises to give peace to you who know you have broken the Law of God and you who also know Jesus died and rose for you to take way your guilt and give you forgiveness instead. So even while we work, we always have rest in Him.