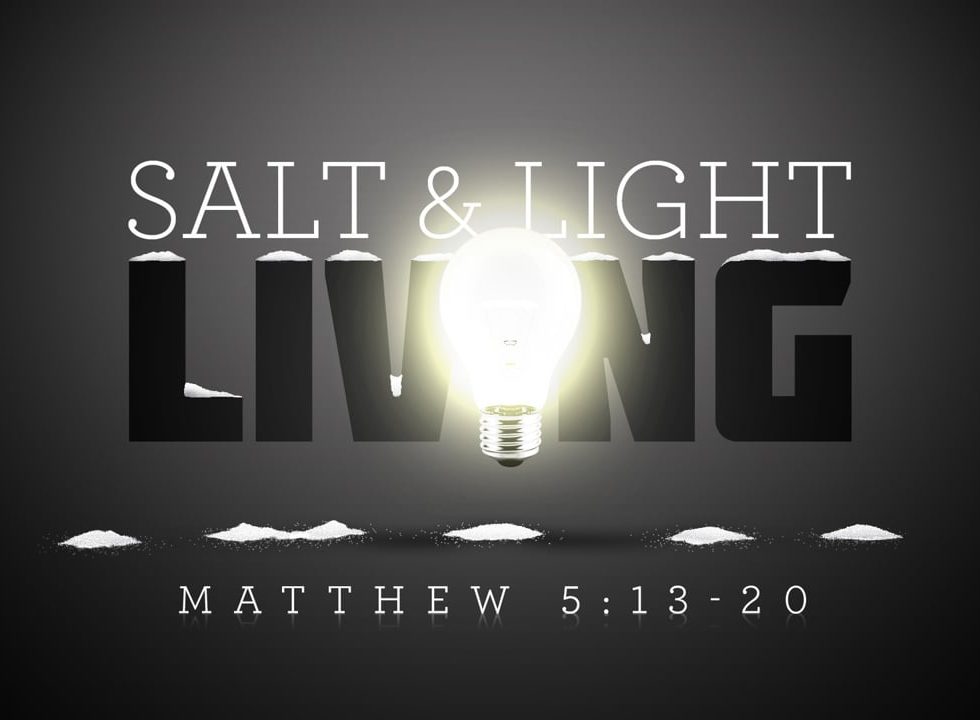 Are you a detail person? I am a detail guy. My sock drawer is laid out correctly…black on the left, brown in the middle, Stance on the right. My remotes in my living room, next to my comfy chair, are specifically arranged…so I can find them in the dark. Everything in my office here is arranged “just so,” because then I do not lose stuff. Since Ash Wednesday 2016, I have been using an app on my phone, entering every single thing I eat and drink on to a web site and tracking my calories. Does that sound like fun? It’s not really, but it helps. I’ve lost 30 pounds since then.
Jesus is a detail guy. Here is what Jesus said in the Gospel that makes me think that:

Do not think that I have come to abolish the Law or the Prophets; I have not come to abolish them but to fulfill them. For truly, I say to you, until heaven and earth pass away, not an iota, not a dot [the King James says not one “jot” or “tittle”], will pass from the Law until all is accomplished. Therefore whoever relaxes one of the least of these commandments and teaches others to do the same will be called least in the kingdom of heaven. (vv 17–19a)

We begin today with what Jesus says, that He upholds every letter of the Law. Allow me to illustrate. These days, we’re getting W-2s, 1099s—or 1099-INTs or 1099-DIVs or 1099-DIV SUBSTITUTES—1098s, you name ’em, in the mail. It is income tax time. Yay? Which means we’ll soon start assembling deductions, exclusions, exemptions, seeing if we qualify for a refund. It’s complicated!

Doing taxes is a detail thing. And if you overlook any detail, and calculate your tax in a way that is less than what you owe, well, the IRS cares about those details. Twenty years ago, you may recall, a billionaire businessman by the name of Steve Forbes was running for president, and he proposed a flat tax to replace the whole federal income tax structure: Here’s how much you made; now pay 17 percent. Simple. The problem, critics said, is that it’s not that simple. It won’t work. At least not at a rate that low. I will say this though, when I look at my taxes when they are done, and they are about this thick, I think Mr. Forbes may have been on to something.

Some people would like to simplify what God has to say—in several ways. There is a pastor who had a book out that asked the question: “What is the least I can believe and still be a Christian?” (If you are REALLY a Christian, do you even ask that question?) Some folks just flat out deny the truth of certain teachings of Scripture: Creation didn’t happen in six days. The Red Sea didn’t really part. Jesus wasn’t really born of a virgin. Others deny that certain teachings of Scripture still apply today: like when the Bible addresses sexuality and marriage and stuff like that. More often, people simplify God’s Word by ignoring passages that seem a little too tough when temptation strikes. For example, we all hate the part where Jesus told us, “Love your enemies and be good to those who persecute you.” (Mt. 5:44) These people argue that it’s all really very simple—like the flat tax. Cut out or ignore what you don’t like. Simple.

The problem, Jesus says, is that it won’t work: “Truly, I say to you, until heaven and earth pass away, not an iota, not a dot [not one jot or tittle], will pass from the Law until all is accomplished. Therefore whoever relaxes one of the least of these commandments and teaches others to do the same will be called least in the kingdom of heaven.” (vv 18–19a)

Anything that lowers God’s standards won’t work. God says we have to keep the law. All of it, all the time. Seventeen percent keeping of the Law won’t work. Neither will 97%.  “You are the salt of the earth, but if salt has lost its taste, how shall its saltiness be restored? It is no longer good for anything except to be thrown out and trampled under people’s feet. You are the light of the world… Let your light shine before others, so that they may see your good works and give glory to your Father who is in heaven.” (vv 13–14, 16)

That’s not optional; it’s a command. We must be salt to season the world around us. We may not start tasting like/being like the rest of the world. We must let our light shine—live like Jesus, speak of Jesus. (Klinkenberg Facebook) We are to love our neighbors, all of our neighbors even the ones that treat us badly. We are to show love, care and compassion to one another, and not expect someone else to do it for us. We may not hush up and blend in. We must obey every letter of the Law. Jesus does not give us the slightest leeway.

That doesn’t sound good does it. And we know why. We don’t do it. We all disobey. We all sin.

When we go to the Epistle, Paul reminds us of this: “And I, when I came to you, brothers, did not come proclaiming to you the testimony of God with lofty speech or wisdom. For I decided to know nothing among you except Jesus Christ and him crucified” (1 Cor 2:1–2).

Proclaiming Jesus crucified proclaims the whole Law. The cross shows how serious the Law is. That’s the Son of God hanging up there! That’s God the Father turning His own Son over to hell and damnation over one piece of fruit eaten in a garden long, long ago. Over one thoughtless word spoken yesterday. Over one word that should be spoken tomorrow to tell someone about Jesus, but won’t be. The cross shows that God’s standard can never be lowered. One hundred percent compliance—that’s it! No excuses, no letting anyone off the hook. Unless you obey the Word of God 100% and do it 100% of the time, you cannot save yourself. In Jesus Christ crucified we see that every misbehavior of every letter of the Law must and will be punished—and to the full extent of the Law.

Now this does not mean we can go nuts and do whatever we want to and God will forgive us. Paul wrote page after page telling us that is not the life a Christian leads. And we need to remember this. The details matter. Jesus is not honored; we are not living our faith if we start saying to ourselves that we will do “this or that” but not “that or this” in the Bible. God’s Word is not a buffet where we get to eat the pizza and prime rib, but not the spinach and the brussels sprouts. Jesus fulfilled all of it. He kept all of it. For us. But we don’t get to hit the “delete” button on any of it.

We are to try and do it all. The lesson today, as it often is, is that there is no such thing as being “kind of a Christian.”