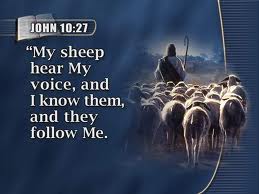 How much name hollering goes on in your house? You know, you say your kid’s name and then you say, “Time for dinner!” “Go brush your teeth!” “Finish your breakfast or you’ll miss your bus!” You know, stuff like that. I would be interested to know how much real listening goes with the name hollering in your home. In my house, the numbers are not so good…at least not with the kids, Rufus comes when we call his name.

When I was in my early teens, we had a neighbor who had a dog, a good sized dog, who was penned up all the time. So I used to take him out for walks and such. He loved me for that. One day he got lose and the dad was gone on business and the mom was pregnant and not very mobile so she called me and asked me to go look for him. I did, but I was in such a hurry I forgot his leash. Well, I found him, and all I had to do to get him home was call his name and he was right here, heeling. He knew his name.

In a world that’s becoming increasingly hostile to Christians, Jesus reminds us today that He knows us by name, and will keep us safe from the attacks of the world and the devil. Our text for this Good Shepherd Sunday tells us, as surely as Jesus told His first followers, that The Good Shepherd Calls His Sheep by Name and Keeps Them Safe in His Hands.

Our setting for the Gospel is this: before Jesus went to Jerusalem for Palm Sunday, He was in Jerusalem an earlier time during the Feast of Dedication, a commemoration of the time in 165 BC when Judas Maccabeus rededicated the temple after it had been desecrated by a guy named Antiochus Epiphanes. Antiochus was a Greek King who invaded Jerusalem, abolished Judaism, and replaced the sacrificial altar with one dedicated to Zeus. Judas led a revolt that fought against them and sought to restore Judaism in the temple. This festival is better known to us today as Hanukkah.

When we look at what Jesus said in the Gospel today, one thing we notice in this text is that Jesus knows that those who love Him will always be under attack in this world. (vv 22–-26). The world is hostile to Jesus, His message, and His disciples (15:18–25). Now we are not just talking about the kinds of folks who fly planes into buildings because they do not like us. There are many in government, the media and universities who think most of the world’s problems exist because of Christians. If you don’t believe me, go to Barnes and Noble and check out the non-fiction best seller rack, or start reading some new blogs.

In the verses right before our text, Jesus was attacked by the Jewish leaders who accused Jesus of being a demon, and that His miracles and power came from hell, not heaven. Jesus pictures Himself as the Good Shepherd, His followers as he sheep, and then the enemies of the sheep include the strangers, thieves, robbers, and wolves.

And just so we are clear, Jesus is describing His time, and our time. This is our world! The Shepherd and His flock are under attack. Every day we hear the Word and Will of Jesus being demonized as homophobic, and racist, and hate-mongering, and narrow-minded. Increasingly the climate out there is trying to limit our effect on the culture, minimize our rights and limit us in how we express our faith.

Here are some examples: A ministry in Lake City, FL was told by a state agriculture department official that they would not be allowed to receive USDA food unless they removed portraits of Jesus Christ, the Ten Commandments, and a banner that read ‘Jesus is Lord’ from their building, and they had to stop giving Bibles to the needy.

You may have heard the allegation that the IRS was used to target Tea Party groups and such. Did you know that one of the targets was the Billy Graham Evangelistic Association?

I am sure you have heard about the case where the folks at Masterpiece Cakeshop in Colorado simply declined to make a cake for a gay wedding because it conflicted with their Christian beliefs. They learned that’s illegal. Or the case of Sweet Cakes by Melissa in Oregon who were fined $135,000 for the same “crime.”

Or how about the professor at Florida Atlantic University who told one of his students to write Jesus Christ’s name on a piece of paper and stomp on it. When he refused, the professor started a formal disciplinary action against him.

Or how about this one: Do you remember that just last fall Chris Harper-Mercer, 26, opened fire on students at Umpqua Community College in Roseburg, Oregon, killing nine and wounding seven others before fatally shooting himself. He asked his hostages to state if they had faith in Jesus Christ. If they stood and confessed themselves as Christians, he shot them.

Then on top of all that stuff, every minute we’re being tempted by the world to follow false gods, gods of our bellies, prophets of prosperity, and theologies of man. Without a shepherd, we’d quickly fall prey to any of these worldly wolves.

Now here is the Good News. Jesus promises that He will always keep us under the care of the Shepherd, Himself (vv 27–28). Through His Word, through the Holy Spirit, the Good Shepherd calls us by name. He knows us, and we know His voice and follow Him (vv 3b–4). Through His Word, the Good Shepherd saves and gives us eternal life (vv 9, 10b). Jesus’ voice leads His sheep to follow Him to green pastures, to His blessings of salvation and eternal life (vv 9, 10b, 27–28a). Jesus cares for the sheep, for us, so much that He laid down His life for us in order to save us from false prophets (wolves) and eternal death (v 11). Jesus really did die and rise for us. In Easter we remember He was not just using a metaphor here.

Jesus also promises to keep in His hand those whom He calls and saves. “I give them eternal life, and they will never perish, and no one will snatch them out of my hand” (v 28). We are promised His protection. We know that we have guardian angels looking out for us. We know He is delivering us from evil. He will make sure that the Church and His Word will overcome no matter what judges and legislators and other people try and do to it. God’s Word, God’s Church, will prevail. We have that promise from our Good Shepherd.

As parents, we have all given our children a name. And we know when we call them they do not always listen. In my house, while the kids don’t always respond, Rufus does.