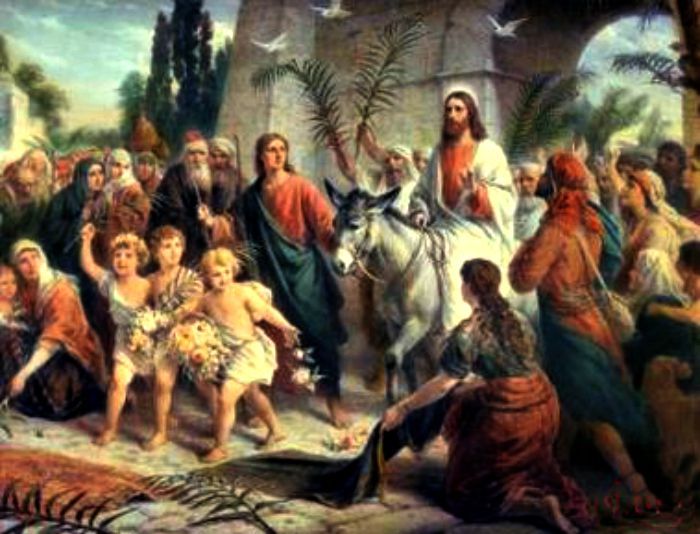 When a president, a prime minister, a king or a queen is about to arrive where you are, that usually sets off a big burst of activity. Preparations are made so everything will be ready when that ruler arrives. A long time ago, on a simple summer day, July 22, 1987, I stood in my driveway (well, my dad’s driveway) and I saw President Reagan fly right over me in Marine One. All of the folks in town tried to see him. He was in West Bend, WI for about two hours, but he was there. When Jesus arrived in Jerusalem there was a big crowd waiting for Him, too. That was fitting, since He is a King, not just of a single country, but of the universe. In our text, we see Jesus entering Jerusalem on Palm Sunday to be crowned as everyone’s King. Yet we also see He arrives in a not so kingly way.

Here’s the story/what happened: Jesus sends two of His disciples ahead as the advance preparation team. They’re to go into the village ahead. There they’ll find a colt tied up. (Matthew says a donkey and a colt, the foal of the donkey.) They are to untie it and bring it back with them. If anyone asks them why they’re doing this, they’re to respond, “The Lord has need of it” (v 3). Sounds simple, yes? Everything happened just as Jesus said it would. The disciples made ready the colt/donkey for Jesus to ride by placing cloaks upon it.

What a contrast to when a monarch is crowned today! The coronation of a king or queen is something few of us have seen. Queen Elizabeth has been on the throne of the United Kingdom since 1952. She is the longest-reigning monarch in British history. Upon her death (she is 94), a new king will be installed (Charles). His coronation will be an event unlike any other in this century to date. Dignitaries from many nations will attend the event in person. The event will be filled with as much pomp and pageantry as possible. It will be a media event witnessed by billions from around the globe. It will be…a BIG DEAL. (Even though it will have no real meaning to anyone other than the Brits, and not really for them either, right?)

Jesus’ entrance into Jerusalem was not a global news phenomenon. It was not covered by RNN, Roman News Network. It was at best a local news piece. And His handlers could have done a much more impressive job of staging the event. The young donkey/colt takes Jesus along the road at, shall we say, a casual pace. Presidents and such today go zooming by in bullet proof limousines. Two thousand years ago, royalty went zooming by on a chariot, or a big old horse. For Jesus, He was just clip-clopping along.

People gathered along the way. They were excited to see Jesus, but those people were not a celebrity audience. Mostly they were just plain folks. They expected Him to enter Jerusalem to be crowned and overthrow the nasty, despised Romans. The crowd eagerly put their coats on the road along with palm branches. It was a gesture of honor that even the poorest people could do. It was their version of the “red carpet treatment.”

Jesus entered Jerusalem with simple dignity. As I said, He was not riding a warhorse. He was not in Charlton Heston’s chariot. Still, the crowds saw in Jesus their hope for salvation and deliverance. They shouted “Hosanna! Blessed is he who comes in the name of the Lord! Blessed is the coming kingdom of our father David! Hosanna in the highest!” (vv 9–10). Hosanna is a cool word. It means “Save now, Lord!” or “Lord, Save us!” The crowds see Jesus as the one who will finally restore the kingdom as it was in the days of David. The folks in those days always looked back fondly to when David was king. Israel was a real power then, militarily, economically. They see, in Jesus, their past which they believe is also their future.

Getting back to our main topic, the Lord Jesus is a great King who brings the kingdom of David with Him. What the crowd didn’t understand was that our Lord’s kingdom was more than an earthly, physical reign from Jerusalem. Jesus was not overthrowing the Romans and other rulers with conventional forces. Pontius Pilate questioned Jesus about His kingdom and Jesus said that He was a king but that His kingdom was not of this world. Jesus is unlike any other earthly ruler. He is God. And a person. He came not to dispose of a foreign occupation, He came to dispose of Sin.

For the arrival of a twenty-first-century dignitary, we’d expect a large police escort, many support vehicles, and at least two limousines designed to confuse a would-be attacker as to which one was carrying the VIP. Modern crowds stand behind barriers to prevent their coming too close. Bodyguards would surround the dignitary, ready to risk their lives for the safety of the honoree. Everything is orchestrated to bring the leader quickly and without incident to his or her destination.

There were no body guards for Jesus, no one willing to give up his life for Him—and as the Gospels tell us that was made very clear later in the week. (When danger reared its ugly head, the apostles turned their tails and fled.) No soldiers, no security detail, just Jesus’ disciples on the road with Him. There’s no attempt to quiet the crowd or to keep them away. There were no protections for King Jesus at His coronation. (Have you figured out when that was yet?)
No, at the coronation of Jesus the world had its way with Him. He was betrayed by a friend under the cover of darkness, while the crowds who welcomed Jesus on Sunday slept. In a hurried manner (because it violated their own rules for a trial), Jesus appeared before the High Priest, Pontius Pilate, King Herod, and Pilate again; quickly, one after the other. Pilate knew Jesus was not guilty of a capital crime, but to please the crowd he sentenced Jesus to death. Stripped, whipped, beaten, and wearing a crown of thorns, Jesus was coronated on the cross. It was there in the weird darkness of midday that Jesus was coronated as King forever.

Jesus is coming back. The trumpet will sound. Graves will open, and the dead will rise. King Jesus is returning (We talked about this a couple of weeks ago. 1 Thess 4:13–18). Every eye will see Him, even those who didn’t believe in Him. At His name, “every knee should bow, in heaven and on earth and under the earth, and every tongue confess that Jesus Christ is Lord, to the glory of God the Father” (Phil 2:10–11). Jesus will welcome home His saints. He will say to them, “Come, you who are blessed by my Father, inherit the kingdom prepared for you from the foundation of the world” (Mt 25:34). The Kingdom we’ve always really needed. The Kingdom that comes with forgiveness of our sins. (And that is basically the whole new church year I have summarized for you.) But we’re getting ahead of ourselves here.

Until then, we wait and we observe another season of Advent. We look back at Jesus’ first coming in Bethlehem and give thanks. We see the climax of that first coming with His coronation on the cross. The manger and the cross are made of the same wood, sort of. Jesus came to die. He came to give His life as a ransom for all (Mt 20:28). A crucifixion is the last place one would look for a coronation, but here is Jesus, crucified for you. All your sins were put on Him. By His wounds, you are healed (Is 53:5). He fulfilled God’s Law completely. His death and resurrection ushered in His Kingdom.
Now we walk by faith in the Son of God, who loves us and gave Himself for us. And one day we will see Jesus as He really is. What was hidden will be seen by everyone. His kingdom of glory will surpass every expectation in its power, splendor, and majesty. King Jesus is coming for you. He will come to take you to be where He is, that you may dwell in the house of the Lord, forever.