“You Sure You Want That?”

“You Sure You Want That?” 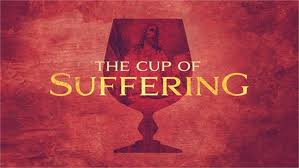 Have you ever been to a restaurant with the kids, and they say they want to order something…unusual? Do you tell them, “Are you sure you want that?” I remember the first time we gave Christopher the garlic noodles from P. F. Changs, he would eat them and at the same time wave air into his mouth. (They had pepper flakes on them). Have you ever been to the store with your spouse and they take an article of clothing off the rack, and you see no fashion awareness there at all, and say, “Are you sure you want to buy that?” Has someone in your family, who has no tech savvy at all, ever grabbed the latest computer or cell phone and you tell them, “Are you sure you want that?” In the Gospel today, James and John say they want the cup that Jesus is going to get. That’s when Jesus said, “Are you able to drink the cup that I drink, or to be baptized with the baptism with which I am baptized?” Jesus asked John and James (v 38), Are You Sure You Want This Cup?

For Jesus, at the time of our text, He was nearing the end of His mission, His salvation mission for us. This text comes shortly before Palm Sunday. (Which is next week) In the verses before our text, it says that “Jesus was walking ahead of them” (v 32), setting the pace. He was on the road to Jerusalem—Jesus “set his face to go to Jerusalem” (Lk 9:51)—and those straggling behind him were confused. Mark tells us they were amazed (which is Mark’s favorite word in his Gospel), and he tells us they were afraid. Jesus had told them He was going to Jerusalem to be handed over to the Romans and be crucified. He told them that again in the verses right before our text. But Jesus pressed on. And He wasn’t taking His time. Why the hurry? They didn’t get it. They usually didn’t. The reality was that this was a death march; Jesus is on His way to Jerusalem to sacrifice Himself for us on a cross. And the clueless disciples followed.

It’s a march toward Calvary, a march that started in Bethlehem and continued at the Jordan River. This is the journey Jesus came here for: the road that leads to Jerusalem, where He will be condemned and delivered up to the chief priests and the scribes, where He will be mocked, spit on, flogged, and killed, where He will rise again. Just as He said would happen. Just as He said three times in this Gospel alone.
That wasn’t what the disciples wanted to hear. Success and glory don’t look like a dead guy on a cross. How can humiliation and death have anything to do with God restoring His kingdom? Remember, they all thought the Messiah would come and restore the OT nation.

James and John—and all the apostles, really—were more interested in their future careers of presumed earthly glory. Even among the twelve, it seemed to them that “who you know” is important. James and John must have figured they were special already—after all, they were invited to the Transfiguration, along with Peter. But since there’s only a right hand and a left hand, Peter would just have to fend for himself.

Now what is going on here is so juvenile, so seedy and underhanded; elbowing your way to the top is hardly loving your neighbor. The other apostles were ticked off. They were probably annoyed that they hadn’t asked first! Like the rest of us sinners, they craved the attention, the recognition, for their own accomplishments. Like children shoving their brothers and sisters out of the way, we want the important people and the world to notice: “Hey, look at me!”

Like the apostles, we can get caught up in ourselves. We stop looking at our neighbor as someone to serve, and instead look inside and say, “What do I want?” In this way, the church becomes fractured, congregations split, husbands and wives divorce, children and parents stop talking to one another. I think we are all familiar with how this works.

That’s not how God created the world to be. Jesus said, “For even the Son of Man came not to be served but to serve” (v 45).
Going back to the text, Jesus dismissed their request. It’s not His to grant, He says, but the Father’s. They will drink the cup. They will all suffer for proclaiming Christ crucified for the forgiveness of sins.

According to tradition, most of the twelve were murdered. None of them had the celebrity life of a televangelist, the fast cars, the luxury houses; instead, they were often hated and reviled, stoned, stabbed, and crucified. James was the first to go—beheaded by Herod Agrippa I in Acts 12. John was the only one to die a “natural” death. He died in exile for daring to preach Jesus.

“You do not know what you are asking,” Jesus said to them. “Are you able to drink the cup that I drink, or to be baptized with the baptism with which I am baptized?” (v 38).
They said yes, they were. Did they know the hostility with which they would be received? Did they know that they and future followers of Jesus would be beheaded, burned alive, tortured, and drowned for taking up the cross?

Did you know that your friends and family might believe differently, that they might call you narrow-minded, just some Bible-believing hick?
Did you know that your confession of faith would exclude you from a world of pleasure and “fun” and sleeping in on Sundays, your conscience unburdened of any guilty thoughts?

We certainly have our own cups to drink from. It’s hard to swallow illness and death, disappointment and heartache that can come with this life. It’s hard, but not impossible. Even unbelievers experience suffering in this life. But you have something else.

You have a promise. You have a covenant, a new covenant.

Jesus is different. Jesus is life. Jesus offers you the cup of salvation; Jesus baptizes you into His household. Our Father in heaven sent His only-begotten Son, that whoever believes in Him should not perish, but have eternal life.

Jesus marches on to the cross in order to save you, in order to serve you. Jesus enters into Jerusalem in order to be the High Priest who offers up the once-for-all sacrifice for your sins and for the sins of the whole world. Jesus was born into this world to be that sacrifice.

Our song is love unknown because we cannot fathom that kind of sacrifice. We cannot fathom the kind of love that loves to the point of suffering God’s wrath for our sin—all the sin of the world, cosmically focused on one, poor, frail, broken human body. Mocked, spit on, flogged; nailed to a cross; lifted up and gasping for breath. Unfairly, undeservedly, willingly.
Are you able to be baptized into the Baptism with which He is baptized? I hope so. For that Baptism baptizes you into His death, killing your sinful flesh. And that Baptism baptizes you also into His resurrection from the dead, giving you new, bodily life in heaven.

Are you able to drink the cup that He drinks? I hope so. He has taken away the sin and the punishment from you so that the cup you drink at this altar is His blood, shed for you for the forgiveness of sins, for your salvation and eternal life.

By grace, He comes to you by these means—not to lord it over you, but to serve you. And by the power of the Holy Spirit, you are brought to faith and sustained in it—not to lord it over one another, but to serve.
Therefore, I encourage all of you to take these words of Jesus, and this Lent sermon to heart. Because there has never been the kind of love that Jesus loves, and this is the place where you receive it—in the cup, at the font, in the promise. The world will never understand. Your flesh will fight you. Satan will rage at you. But Jesus will serve you in perfect love, to guide you through the suffering and temptations of this life, to lead you to paths of righteousness and holiness, so that you can face your own stingless death. He has already accomplished it, just as He promised. And that is what you want. It is what we all want.