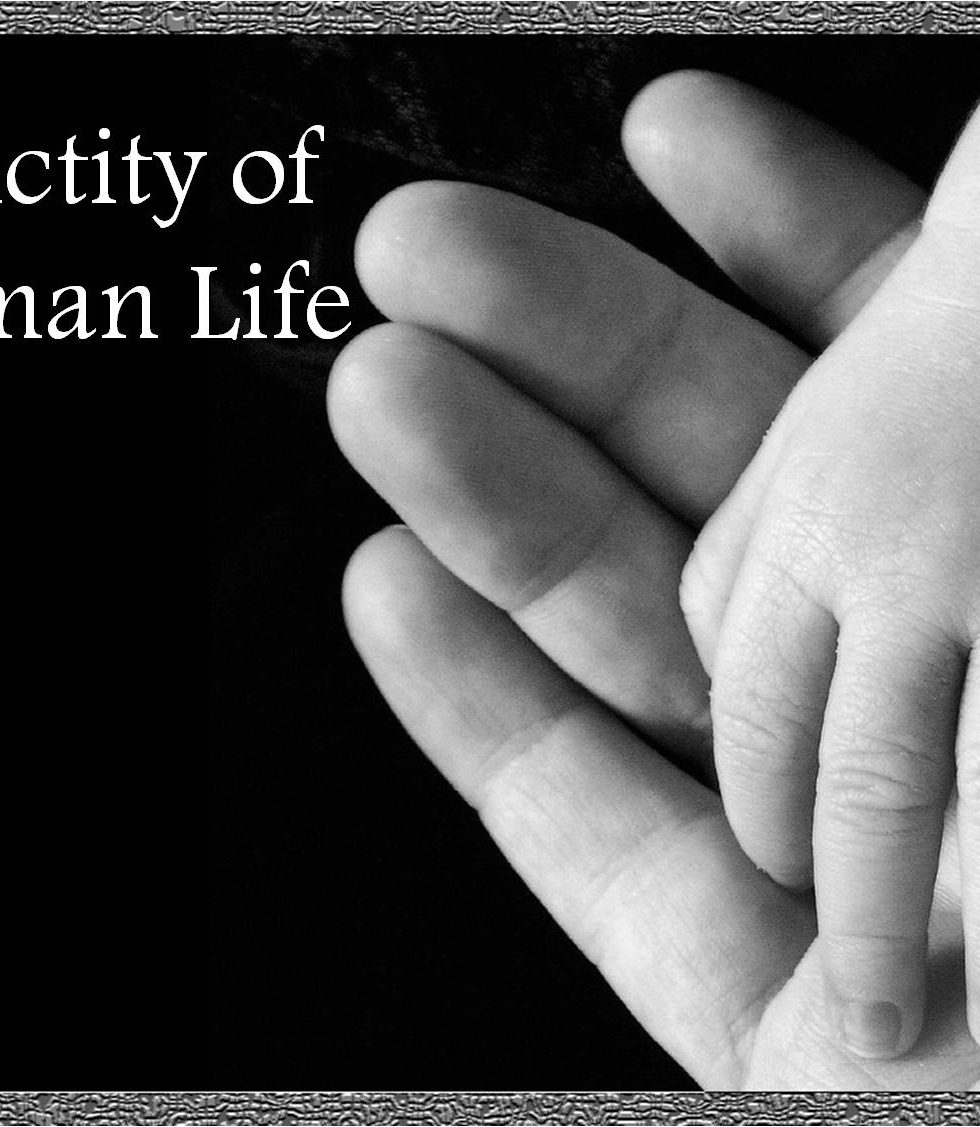 Third Sunday after the Epiphany: Sanctity of Human Life Sunday
You Matter
Jonah 3

Have you ever been somewhere where the folks you are with ask your opinion, you state your opinion, but then your opinion/idea/wishes are ignored? That ever happen to you? You are with the family and someone says, “What does everybody want for dinner?” You say what you want, but no one seems to care. You are at a sales strategy meeting, and someone asks for ideas. You give yours, and it is rebuffed or ignored. If you feel like someone who is often ignored, or that you don’t matter, I have good news for you. You matter. You matter. Unless you are multiplied by the speed of light squared, then you energy. (Sorry) When people ignore us repeatedly, that is hard to forgive, right? That makes us mad.

Jesus said we are to forgive each other. How easy is it for you to forgive someone who hurt you? Can you forgive a family? Can an entire city be forgiven? What about an entire country? Sin, repentance, forgiveness—these are not trivial issues for us Christians. We must understand and deal with these matters, but we do so from the perspective of the Good News, which tells us: Our Need for Forgiveness Is Not Found In Our Ability to Repent but in God’s Willingness to Relent, to Forgive, for the Sake of Jesus.

In Nineveh, we see our relenting/forgiving God in action. The Assyrians were the nastiest, most vicious superpower of Old Testament times. ISIS bad. Worse, actually. Nineveh was their capital city. The Book of Jonah does not tell us how evil Assyria was, but the prophet Nahum tells us and gives us a bleak picture. “Woe to the bloody city, all full of lies and plunder…” (Nah 3:1). Nahum also wrote about, “…hosts of slain, heaps of corpses, dead bodies without end.” And Jonah wants God to wipe all those people out. Jonah wants God to do an abortion. Jonah calls for turning off the Assyrians’ life support. Clearly, the Ninevites were a mistake—unfortunate and unwanted. One way or another, Jonah wants to see the Ninevites euthanized.

You see, their continued existence makes Jonah uncomfortable. Jonah was told by God to go to Nineveh. Jonah didn’t want to go. Nineveh is the last place he wanted to go. If I got a call to be a pastor in Pyongyang, that would be close to the same thing. Jonah didn’t want to save those people. They were the enemy. So he went the exact opposite direction, got swallowed by a “great fish,” got burped back up on the beach, and then he went to Nineveh.

His entire sermon was this: “Yet forty days, and Nineveh shall be overthrown!” Jonah was happy to preach that sermon. And then he camped outside the city to wait, and watch, and hope for the worst. Jonah was sitting outside of town, under a shade tree, with a picnic lunch, waiting for the show to start, waiting for God to kill them all.

Jonah did not get what he wanted. The Word of God worked! The people believed God. God convicted them of their sin and gave them repentant hearts. The king of Nineveh himself got into the act and commanded everyone to show signs of repentance—to fast and wear sackcloth. He even commanded this for the animals! He took no chances. “Who knows?” he said. “God may turn and relent” (v 9). God did relent. “When God saw what they did, how they turned from their evil way, God relented of the disaster that he had said he would do to them, and he did not do it” (v 10).

God looked ahead to that awful, wonderful Good Friday, and in His mercy, for the sake of that coming sacrifice, relented of the disaster He planned for Nineveh. That “bloody city, all full of lies and plunder” (and corpses) was spared from what it really deserved.

Now what I am about to say will not sit well with some of you. But it is the truth, and it is the truth we need to talk about in our churches, especially on this January 21st, one day before the forty-fifth anniversary of the Supreme Court’s Roe v. Wade decision legalizing abortion. Whether you’re comfortable hearing it or not, the truth is that abortion has made this country a bloody country “all full of lies and plunder.” Like Nineveh, we need a relenting/a forgiving God.

Abortion is a gruesome procedure that some say is carried out over three thousand times every day in this country. Between 1970 and 2014, the CDC reported nearly 44.5 million legal abortions. That’s an average of a million abortions every year. The company that does the most abortions is Planned Parenthood. Their annual report came out last week, I believe. In the last fiscal year, they did 321,384 abortions. 83 abortions for every adoption referral. These numbers come from their report. And this leads to my next thought.

Our country is full of lies when it comes to abortion. Every day, thousands of vulnerable women hear the lies. “Abortion is your only choice.” That’s a lie. There are other, life-affirming choices and thousands ready to support women in those choices. “Don’t worry; it won’t hurt much.” Another lie. Abortion hurts physically, emotionally, and spiritually. The biggest abortion clinic in Ohio did a billboard campaign that made the news earlier this month. Some of the billboards slogans included, “Abortion is liberty,” “Abortion is a blessing,” and “Abortion is sacred.” Those are all lies, of course. Then there is, “It will all be over soon.” The most deadly lie. An abortion affects you for the rest of your life.

If we are going to change things out there in society regarding the God-given value of human life, then we need to change things in here first, in our own hearts, and then in others. Science reveals clearly the humanity of the unborn from the moment of conception. But God’s Word reveals that it is much more. God formed every human being with His hands. Jesus died on the cross and rose again for every human being. God desires to call every human being into an eternal relationship with Him.

We need to tell people that they matter. You matter. They matter. More and more in our society, the idea is spreading that we don’t matter, that we are here by accident, there is no meaning to life, there is nothing that happens after this life, and therefore there is no hope. But there is hope, we all do matter, we are here, created by God and here by God’s Will to do God’s Will and join Him in heaven. Unborn babies are included in this.

Our value as people comes from what God has done and not from anything we do. That means these issues are way bigger than just social or political issues. Every life is valuable to God, whether you live in a house or in a womb, whether you are up and walking around or confined to a wheelchair, whether you are making a name for yourself or no longer able to remember anyone’s name.

Therefore, as Christians, we are not for life and opposed to abortion because the children are precious. We are for life because the children are precious to God. We are not for life because we live in a society that isn’t, but because we serve a God who is for life. This means that speaking up for life is not an option for Christians. We are compelled to do so. We have to do it. And that is why I am preaching this sermon this morning.

If you mention the topic of abortion in conversation, first of all, good luck with that. This is a topic that people feel strongly about on both sides. God feels strongly about this, too. Secondly, this is a topic for which many people have a lot to say. We have something to say that is more powerful than Jonah’s threats of disaster. In fact, the Gospel of Jesus Christ gives us the most powerful and positive for-life message in the universe. This message of victory over death, of hope in the midst of despair, of love for the vulnerable, of strength for the weak, and of good coming from suffering is tailor-made for the life issues. Indeed, it is the only message that can truly change hearts, minds, and lives.

So, how do we share that message? First, we educate ourselves on these issues and learn what God’s Word says about them. Then we can help places like Birth Choice or Lily Field Ministries. And we can give witness to the value of human life in our daily walk as Christian citizens. We can defend the vulnerable as we speak in love about the value of each human life through the things we say and do. We can look for opportunities to share with others the source of that value in our creating, redeeming, and calling God. The life issues give opportunity, not just to call wrong things wrong, but to share what our loving God has done about wrong things in His Son, Jesus Christ. We can speak of our God and His love for the weak and helpless. We can speak of His love and healing for those hurting and despairing. We can speak of our relenting/forgiving God. We have a POSITIVE message for our neighbors and our country. Not a negative one. We are not called to say people are bad. We are called to say God is Good.

OK. Time to wrap up. It is sad to say, but because of abortion, we live in a bloody country “full of lies and plunder.” We live in a country that needs to repent and change. But the beginning of that change takes place in our hearts as we repent of our indifference toward the God-given value of human life. Then, armed with the Gospel of Jesus, the most powerful and positive for-life message in the universe, we can be God’s instruments in changing people’s hearts and minds. Let’s all help make that happen, one person, one mind at a time.