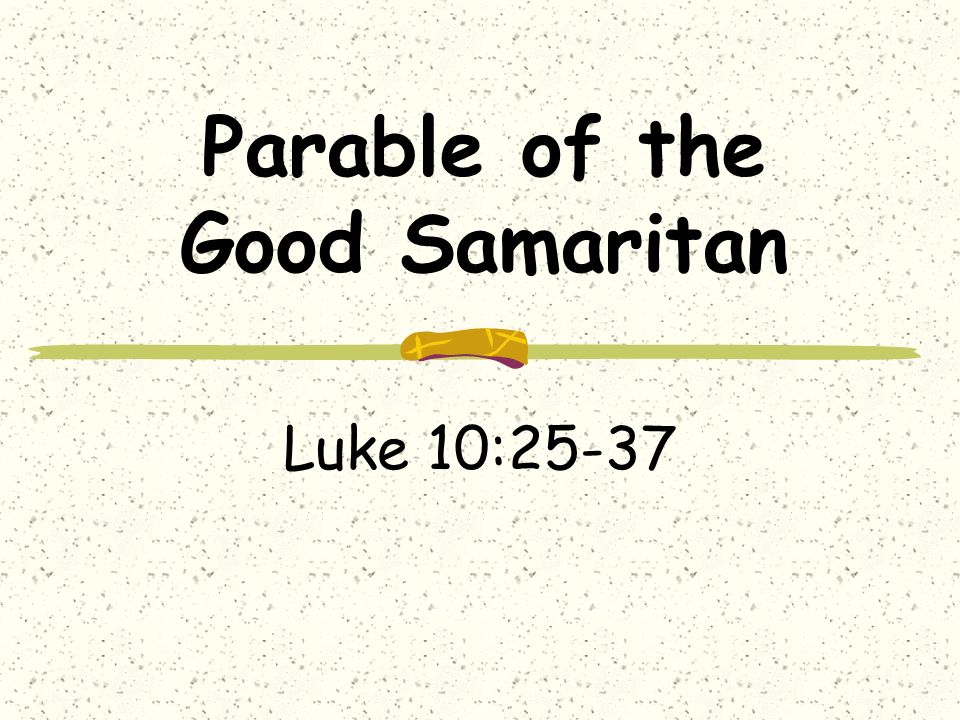 Today we are going to talk about lawyers. Yea! That sounds like fun, right? Lawyers are ok, right? Some of our best friends are lawyers. We also know that lawyers are not always popular. Hundreds of years ago Shakespeare even said, “Kill all the lawyers.” I always thought that was a little extreme…

In our text today, a text you may know well, a lawyer stood up and asked Jesus, “Teacher, what shall I do to inherit eternal life?” (v 25). The lawyer is asking Jesus a question about God’s Law. There’s nothing wrong with talking about the Law. The Law is good. God wrote it. It paints a good picture of how our lives are meant to be loving.

We heard a lot of Law from Leviticus today. Most people would like what it says (Lev 19:9–18). We would have a hard time disagreeing that it’s a good thing to take care of poor people, to be nice to people, fair to people. Holding back wages, cursing deaf people, putting obstacles in front of blind people, lying in court are considered bad by most people, right? We may have a hard time doing what it says in the Old Testament reading sometimes, but I am standing here thinking that we would agree with what it says.

The deal here is that the lawyer is trying to use God’s Laws to make himself look good. His motive is wrong. One thing we know about lawyers, sometimes when they ask questions, they’re looking for the answers they want, the answers that serve to prove their case. So it is with the lawyer who stands up before Jesus in our Gospel today. The problem is in the premise. “What shall I do to inherit eternal life?” That’s the question he asks. And he is asking the wrong question. I like to read books and watch movies and TV shows about lawyers. One thing they like to say in these “entertainments” is that a lawyer should never ask a question for which they do not know the answer. The lawyer in this text violated this rule. He is asking the wrong question. When we mix up our doing with God’s giving, we have a big problem. And when it comes to eternal life, God does all the work, God does all the “doing.” It is not us. The problem here is in the purpose for the question: “But he, desiring to justify himself, said to Jesus, ‘And who is my neighbor?’” (v 29). He wanted to make himself look good. He wanted to look good to all those who were around them listening to this conversation. He thought what he did, not what God does—not what Jesus does, what he did got him into heaven.

In the text, Jesus straightens out the lawyer’s question. And he straightens us out. Jesus by the questions He asks moves us away from how we can prove ourselves right and instead toward seeing ourselves as wrong. Jesus shows us that we have not been a neighbor to those in need. Our compassion has been lacking in so many ways. How many times do we tell someone looking for charity that we “gave at the office?” When we see someone who is living a life of sin, do we just judge them and forget them, or do we see them as sinners who need Jesus and what He offers? If we know there is someone who is hurting at church and we don’t want to be troubled by that (we talked about this last week) and so we walk the other way, is God pleased with us then?
We have no excuses.

Now all that said, this is often how we approach the analysis and interpretation of this text. We see it as something Jesus said to view how we behave. Let me give you an example. Back in April, I went to Lubbock, Texas where I went to a training seminar for police chaplains. It was a good conference. One of the chaplains who was tasked with doing the devotions one morning spoke to us about this text. And he said the problem in the text was how selfish everybody was. He said the robbers went up to the poor guy and they said, “We want what you have.” And they took it. When the priest and the Levite came along, they said to the guy who was laying there all beat up, “You can’t have what I have,” because it would interfere with their temple duties. But then the Samaritan came along and saw the victim laying there and said, “Let me give you what I have.”

The guy leading this devotion had everyone’s attention. He was a good ol’ boy from Louisiana and he was a good preacher. He knew what he was doing. Did you like the way he broke down the story? Sounds good, right? We would agree that the Samaritan man in Jesus’ story is a good example for us to follow in being people who care (vv 33–35). We agree that this is a good way to be. We want to be like him. We don’t want to be like the robbers in Jesus’ story. We don’t want to be like the priest and the Levite. We know this is how we should be. Except I do not think this is what Jesus was telling us with this story.

Jesus turns us to asking the right question: “Who was a neighbor to this man?” And the person Jesus wants us to see ourselves as in the story is not the Samaritan, He wants us to see ourselves as the guy beaten up on the side of the road. The man is us. We are knocked down, beat up, ripped off—by life, by sin, by our own desires, by the opinions of others.
Nobody is perfectly a neighbor to us . . . except Jesus. In fact, Jesus is the right answer to all the questions. Jesus is the Good Samaritan (vv 33–35). He comes to us, to each man, woman, child, beaten up by sin, by the devil, half dead, and awaiting death. He touches us with His words; Jesus heals us with the water of Baptism. And Jesus provides us with shelter (in His Holy Church) and food (His Holy Supper) until He returns on the third day. Jesus proves to be the Neighbor to us all. Jesus does not pass by anyone. The proof of His compassion is in His life of loving service and in His sacrificial death. On the cross, He paid all it cost to nurse us back to life.

On top of that, Jesus is risen from the dead and still having compassion on us. That does not end. Jesus is also our new Lawyer. He is our Advocate with the Father (1 Jn 2:1). When Jesus stands up to speak, it is not to test anyone, but to defend us, the guilty ones, and bless us with His innocence. Jesus does not ask us what we’ve done to gain life. He tells us what He has done to give us all eternal life.

In a devotion this week, Ken Klass of the Lutheran Hour quoted a study where a national magazine asked people to list the things they couldn’t live without. Sixth-three percent of the people said they needed their automobile; 54 percent said light bulbs were necessary, and 42 percent wanted to keep their telephone. Twenty-two percent were unable to give up their television, and 19 percent had to hold on to their aspirin. Seven and eight tenths percent of the folks asked needed their blow-dryer, and 7.6 percent said they couldn’t lose their personal computer. You will note that God isn’t in those lists.

The story of the Good Samaritan tells us, bottom line, is that when all is asked and answered, when all is said and done, Jesus has said everything we need to hear, and done everything we need done, to inherit eternal life. Don’t Try to Justify/Save Yourself, Because Jesus Already Has Welcomed You as His Neighbor in the Kingdom.