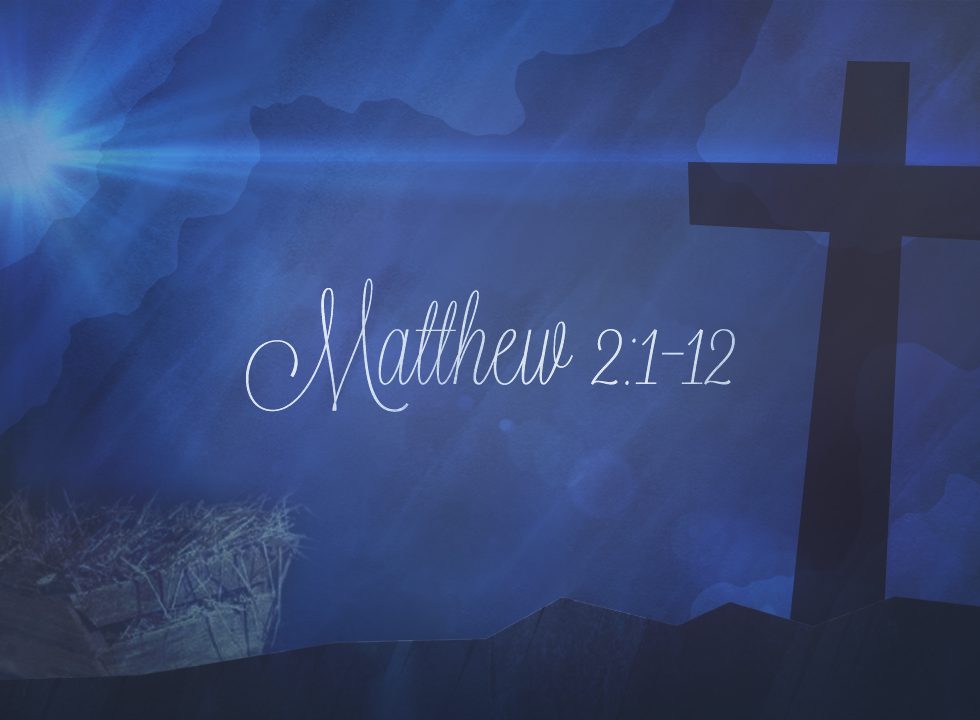 The Epiphany of Our Lord
Star of Wonder, Star of Night
Matthew 2:1–12

Did any of you happen to be driving around a week ago Wednesday and see any Christmas trees, ornament-free, dumped on the curb, ready to be hauled away? You can’t say that’s wrong. People have their own decorating schedules for Christmas and their own timetables for putting stuff away. Some don’t put up a tree at all; no sin in that! It’s a tragedy, however, if anyone does this with, puts away, the Christmas Good News—that is, packs it away already on December 26.

The people who long ago set up the Church Year and the Church Calendar don’t let us get away with that. The gift of Jesus is so important that they gave us weeks of Gospel readings to think about this gift and to watch how different people responded to it. We don’t just celebrate Christmas with Joseph and Mary, the manger and the shepherds. We also celebrate Epiphany to see how this gift, this Jesus, was received by people everywhere. A way to do that today is to consider how people respond to the Epiphany star. You know the song, even though it is not in our hymnal, because it’s well, wrong. But Has That “Star of Wonder, Star of Night,” Really Been a Star of Wonder to Everybody? We are going to talk about that today.

Matthew begins: “After Jesus was born in Bethlehem in Judea in the days of Herod the king, behold, wise men from the east came to Jerusalem, saying, ‘Where is he who has been born king of the Jews? For we saw his star when it rose and have come to worship him’ ” (vv 1–2).

Who were these “Wise Men”? Scripture doesn’t call them kings, even though the “star of wonder, star of night” song does. The Bible doesn’t say there were three, even though the song says that too. We picture that number because of the three gifts. By the Middle Ages, the Wise Men were considered saints. They even had names given to them: Gaspar, Melchior, and Balthasar. But we have no idea, actually, who they were. By calling them “Wise Men,” we are not saying they were smart about Scripture or the true God. They may have been professors, if you will, and they wanted to learn more. We do believe they were astrologers who mixed the religion they got from Jewish exiles in Persia and the superstitions they got from their native Persian culture. They were very modern, in that they believed a little bit of this, and a little bit of that, just like a lot of people do today. The Magi were pagans, and they would be the last people Matthew’s Jewish readers would expect to be looking for the Messiah. But God led them to look.

Another thing about these Wise Men: They were far away from God’s kingdom Israel. They likely lived hundreds of miles to the east of the Holy Land. But watch them! The Lord showed them a special star. Though there were unanswered questions, they didn’t just sit there. They set out on a trip that could take months. It cost them money. It meant inconveniencing themselves away from normal work and commitments. But that was ok with them! They wanted to get close to the one born king of the Jews. They went to Jerusalem (Capital of Israel), not Bethlehem (so they did not know the Old Testament.) Even after they had passed through Jerusalem, when they saw the star again on the final leg of their trip, they—if I may paraphrase the old Greek Bible— “rejoiced with a whopping big joy” (v 10)!

This is cool! Wise Men, far from Israel, receive a bit of prompting and the sight of a star, and they make it their number one priority to get close to the newborn king. “And going into the house (not a stable), they saw the child with Mary his mother, and they fell down and worshiped him,” sounds like they fell down in wonder! “Then, opening their treasures, they offered him gifts, gold and frankincense and myrrh” (v 11). Gifts fit for a King…not a Savior. I read that these guys went looking for a King, and God showed them a Savior.

When these guys showed up in Jerusalem—the heart of the Holy Land—and told the Jews they’d seen a miracle star pointing to the birth of the New King, you’d think those folks there would have been thrilled. Matthew says it didn’t go like that. The star that was such glad news to these pagans from the east turned out to be upsetting news for the citizens of Jerusalem.

Why? Why does it say, “When Herod the king heard this, he was troubled, and all Jerusalem with him” (v 3)? You’ve heard of the Herods. They could be a bloodthirsty bunch. Once one of the Herods massacred a crowd of people on the street just because he overheard some of them sympathizing with other people he had already killed. Herod the Great had killed pretty much anyone in the succession to the throne. When Herod heard of this star, he didn’t think of God’s promised Savior, the salvation of his soul, and what a good thing this would be for his people. He thought, “It’s a threat to my throne!” This threat had to be put down, with force if necessary.

Herod was a spiritual fake. Did you catch that when I read this a minute ago? “Then Herod summoned the wise men secretly and ascertained from them what time the star had appeared. And he sent them to Bethlehem, saying, ‘Go and search diligently for the child, and when you have found him, bring me word, that I too may come and worship him’ ” (vv 7–8). He summoned the Wise Men, not openly, but secretly, to calculate when the star appeared. He sent them off to Bethlehem to check this out. He lied about his intentions. He made it sound as if he wanted to go himself to kneel before this Child. But murder was in his heart the whole time.

Herod wasn’t alone in being upset by the star. Hear it again, “When Herod the king heard this, he was troubled, and all Jerusalem with him” (v 3, emphasis added). Why were the people who lived in Jerusalem upset? Well, they were afraid Herod would go on a rampage. When his sword started swinging, no telling who could be killed! For the residents of Jerusalem, their chief wonder at the star was whether they’d be collateral damage. You can understand why they were upset.

Here’s another group that failed: When Herod gathered together the Jewish Bible scholars and asked where the king was to be born, those spiritual leaders had an opportunity! They knew it was predicted for Bethlehem, just six miles down the road. They could have said, “Brothers and sisters, this is what we’ve waited for! Let’s hurry along with these Wise Men! They’ve come hundreds of miles; surely we can walk the last six with them!”

But no! These people who knew Scripture and were totally familiar with God’s promises took little interest. No excitement. No awe. No wonder. They didn’t encourage other people either. They were just, “Let’s sit tight and hope this blows over!

There you see it: a group of pagans who know little of the true God drop everything and undertake a grueling journey to get close to the newborn king of the Jews. Meanwhile, God’s own chosen people with years of Bible teaching, living just a nice walk down the road from Bethlehem, just sit there. They don’t seem interested in what the Lord has placed in their own neighborhood.

Now, do you see what’s happening here? The star makes a point: God will get His way with you or without you. He can do that. If He has to do it without you, then you’re the one left behind, who stands on the outside looking in. The Epiphany star asks you a clear question: Is it a star of wonder for you? How are you responding to this Baby Jesus, the great Christmas gift from God? In wonder, faith, and joy . . . or not?
In many ways, we’re not always so different from those Jerusalem people. You’ve had incredible spiritual blessings here, years of Bible teaching and preaching in our church family. But you and I have the old sinful nature working down inside us. We’re not really better than the Jerusalem folks who didn’t care much when the Wise Men arrived all excited about the newborn king. We can reach the sad point where we think, “Big Deal,” when we approach another Christmas holiday, because, after all, “we already know that stuff!” The devil can take a great spiritual gift and suggest we don’t make it a big deal, because we may say a shallow “Yeah, yeah” to the Christmas message without embracing it with the gladness, the wonder, that we should.

We’ve just crossed into a new year. That fact should fill us with two thoughts: First, to thank God for all His kindness in the past, and that He has gotten us safely into 2019, Second, each new year can remind you that time is ticking away. You’re coming that much closer to the end of all things (Jesus’ return), or to the end of your personal life, whichever comes first. Perhaps this is the last new year you’ll celebrate Christmas before Christ comes again. Maybe 2019 is the final January I get to proclaim this good news before the Lord takes me home.

The TV and Internet are full these days with predictions of what we can expect this year in politics and money matters, and what we should do as a result. Maybe you have set personal goals about what you want to accomplish with your money, or remodeling you want to do with your house, how many pounds you want to lose, how fast you want to run a Half-Marathon.

How do you plan to spend 2019 in your life as God’s child? What are your “God Goals”? The Wise Men had to travel hundreds of miles to get to Jesus. You don’t have to do anything like that. You’ve got Bethlehem right here in our church, whenever the saving news of Jesus is spoken. Whenever the Holy Sacraments are offered as Jesus gave them to us, there you have the Christ Child; there He is, giving Himself and the free pardon for the sins of many years. They are all covered over and blotted out of God’s memory by the blood of your Savior, Jesus, who died on the cross and rose again. That’s a wonder, right? We should live this day, every day, in Wonder of what God has done, does, and will do for us.

As we think about the Wise Men today, they show us what a privilege it is to drop everything else and get to where the newborn King lies. God just gave us one more Christmas to hear the news flash from Bethlehem! He gave us this new year of grace, a slate wiped clean by His pardon, this wonderful time when we can give ourselves back to Him who gave so much to us!

Therefore, it is my prayer that we don’t rest until we get close to this holy Child, so that we take our place right where we belong, on our knees in wonder, next to the Wise Men who rejoiced before Him with their whopping big joy! Because that baby is the Savior Jesus who died and rose for us.

That’s the way to respond to the “star of wonder, star of night.” Worshipping Jesus. May the days of 2019 find you doing, and me doing, exactly that! Worshipping Jesus with Joy.
In Jesus’ Name.