“When Something is Wrong, God Provides”

“When Something is Wrong, God Provides” 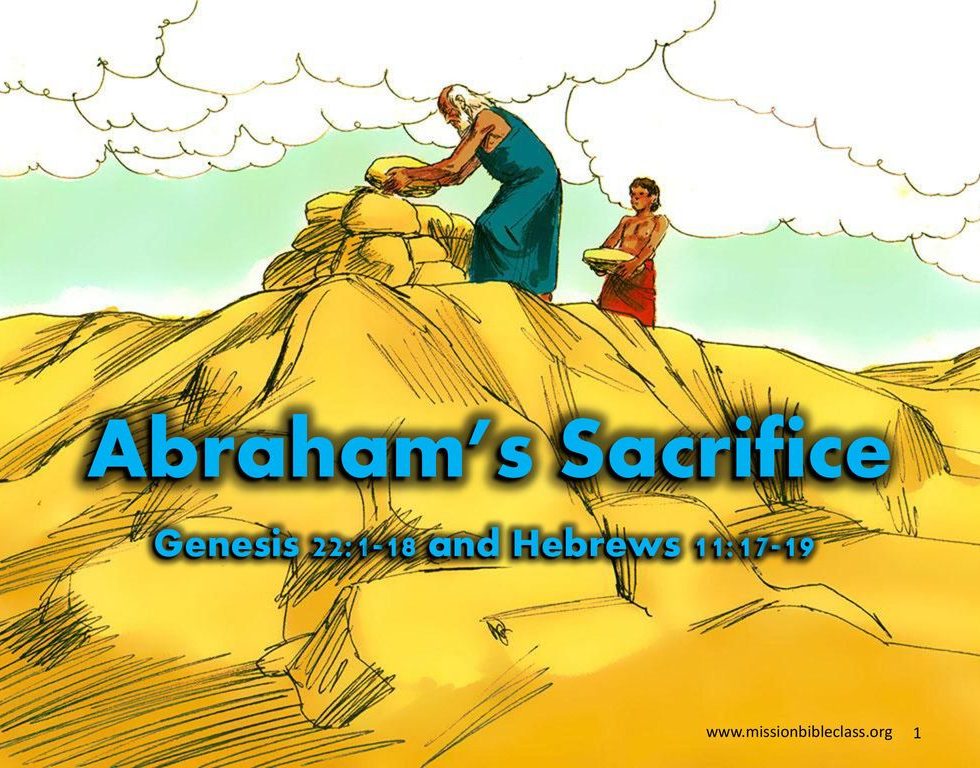 Have you ever watched one of the many movies, usually war movies, where somebody says, “It’s quiet. It’s too quiet.”? Have you ever been to someone’s house for a social visit, and you immediately sense something is off with the couple you are there to see, like they had a fight just before you rang the doorbell? Have you ever walked into work and just by the buzz, the hum, the way people are acting and talking, you know that something is wrong?

We see this in the Old Testament text today. During these three gut-wrenching days of Abraham’s life, I have to believe he thought to himself, “Something is terribly wrong here.” I would agree with him. Something is drastically wrong here. Even though we know how this all turns out, you can’t help but read this Bible passage and say, “Something is drastically wrong for God to command a father to kill his son.” I read about a pastor who was talking with someone about this particular passage. She simply said, “I cannot believe in a god that would tell a dad to kill his son. I don’t care how this ends up. For that kind of god to ask that, I cannot in good conscience worship him.” (My retort to that is God did that, He watched His Son die.)

When we step back from this passage and just look at what’s happening, something is drastically wrong. You can see how wrong it is because of the love in this father-son relationship. God says, “Take your son, your only son Isaac, whom you love” (v 2). Abraham loves Isaac, born to him in his old age. Watching him grow up, Isaac would be the apple of his eye, the light of his life. Then to hear God say, “Go sacrifice him.” Those few words had to be the last thing Abraham wanted to hear. How could God ask that?

Something is drastically wrong here, but not just on that human level. On another level, God’s promises are at stake here. He promised that Abraham would be the father of many nations, that his offspring would be as numerous as the stars in the sky or the sand on the beach. A promise that out of Abraham’s line would be born One who will be a blessing to all nations. To kill Isaac is to break that promise, to renege on what God told Abraham.
Something is drastically wrong when God tells a father to slaughter his son and when God’s promises come into question.

But not just back in Abraham’s time. Today, when we see what happens to children, we say, “Something is drastically wrong.” We often see on the news reports of children getting shot and killed. Or run over by a drunk driver. The first anniversary of those Moore High School Cross Country kids was a couple of weeks ago. We see that and we simply say, “Something is drastically wrong.”

Maybe you get mailings from St. Jude’s Children’s Hospital, a hospital that does research for children who have cancer. The hospital provides free care for those children. When I get a letter asking for a donation and open it up, most often there’s a picture of a child without hair because of the cancer treatments. You look at that and give thanks that many of those children now live. But some don’t. Children still die of horrendous diseases, and we think, “Something is drastically wrong here.”

I’ve read that anxiety and worry among teenagers have skyrocketed and, with that, teenage suicide. Something is wrong. Take every school shooting—Columbine, Parkland, Marshall County, Sandy Hook, all the others—and add to them the other mass murders: the Las Vegas concert, the Pulse nightclub in Orlando, the Boston Marathon bombing. Every one of those victims was somebody’s child. Something is wrong here. Something is drastically wrong here.

Going back to Abraham and Isaac, Abraham journeyed the three days to the mountain (Location of Solomon’s Temple) with Isaac. Those three days must have been really hard because he knew what he was supposed to do at the end of them. But a couple of sentences indicate that Abraham had hope. He trusted that somehow God was going to figure something out. He says to the two servants, “You stay here. I and the boy will go up to the mountain and will come back to you” (cf v 5). He does not say, “I will come back to you,” but, “I and the young boy will come back to you.” He’s trusting that God will provide. Or after Isaac’s question, “Father, here’s the wood and the fire, but where’s the lamb?” Abraham replies, “God will provide it” (cf vv 7, 8). With those words, we are listening to Abraham holding on in hope to God’s promise, and that trust, that hope, that belief takes him all the way to the moment when he is next to Isaac with the knife in his hand.

The Book of Hebrews (11:17–19) confirms this: “By faith Abraham, when he was tested, offered up Isaac, and he who had received the promises was in the act of offering up his only son, of whom it was said, ‘Through Isaac shall your offspring be named.’ He considered that God was able even to raise him from the dead, from which, figuratively speaking, he did receive him back.” Did you hear how that description of Abraham started? By faith. By faith, Abraham took Isaac up that mountain.

At that moment, Abraham’s faith held on to the promise that God would provide. In this case, God did provide by sparing Isaac’s life. But on a bigger, broader, deeper level, God provided. We can see the parallels here. Isaac carries the wood for a sacrifice. Jesus carries the cross for His sacrifice. Isaac is the son, the only son, whom Abraham loved. Jesus is the Son, the only begotten Son, whom THE Father loves. A ram is in a thicket to be sacrificed in the place of Isaac. Jesus, on the cross, takes our place, and is sacrificed for us. (“The Lamb of God who takes away the sin of the world.”) The promises come true. Through Isaac, Abraham’s descendants are numerous. From Abraham’s offspring comes Jesus, who died and rose for us. God provides—forgiveness, life, salvation.

God provides and keeps His promises for us as well. If you have been to a funeral, if you have lost someone you love, well, you know how that goes. It’s not fun. For me, one Bible passage particularly has been a source of hope. Romans 8. I read it at a lot of funeral services: “I’m convinced that nothing will be able to separate us from the love of God that is in Christ Jesus our Lord” (cf Rom 8:38–39). But I believe God has provided in another way. Earlier in Romans 8, Paul wrote, “If God is for us, who can be against us? He who did not spare his own Son but gave him up for us all, how will he not also with him graciously give us all things?” (vv 31–32). Jesus is not only for us on the cross. He has risen from the dead to be with us as well. When Everything Looks So Wrong, God Provides by Keeping His Promises for Us and Being with Us.

Let me give you an example of what I am talking about. Lazarus’s death and Jesus’ conversation with Martha and Mary show both the “for us” and “with us” beautifully. Jesus had a messenger come to Him one day to tell Him that one of His closest friends, Lazarus, was sick and about to die. For some reason, Jesus waits two days before going. When He finally arrives, Lazarus is dead and both of his sisters, Martha and Mary, accuse Jesus of being too late and that it is His fault Lazarus is dead. While talking to Martha, Jesus said, “I am the resurrection and the life. Whoever believes in me, though you die, will rise again. Do you believe this, Martha?” (cf Jn 11:21, 25–26). She did. After He talks to both sisters, Jesus weeps/cries.

One day I saw on Facebook a meme about Lazarus’s death and Jesus’ tears that caught my attention. Jesus knew He could and would raise Lazarus back to life. But still Jesus cried because His friend had died. Jesus knew that His death would defeat death for everybody and yet, Jesus cried about Lazarus’s death. The meme concluded, therefore, that knowing how the story ends doesn’t mean you can’t cry at the sad parts.

God provides by keeping His promises written on a cross and an empty tomb. Listen: He’s always by your side. He did what He didn’t make Abraham do. God watched His Son die for us. Jesus is FOR YOU and WITH YOU. You are never alone. He hears our prayers. He surrounds us with His grace. God is never more than a prayer away.

But there will come a day when there will be no more tears. Jesus will come back. On that glorious day of resurrection, He will do for us what we could never do. Children will no longer have to worry about being killed or think about suicide or dying of horrible diseases. Instead, everything will be dramatically right. But until that day, we will cry at the sad parts. And like Abraham, when that happens, all we can do is trust that God will provide because Jesus is with us, He is for us, and He keeps His promises.