“What Are You Looking At?”

“What Are You Looking At?” 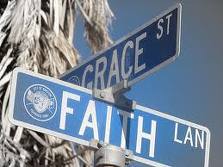 Title: What Are You Looking At?

Grace to you and peace from God our Father and the Lord Jesus Christ.

So, I got all excited when I noticed that the youth group was supposed to go over to Pole Position to race go-carts this afternoon.  And you all know me well enough to know that I couldn’t resist using that in today’s message.  Well, by the time I heard the trip was postponed, the sermon was already done.  So, in August when you all do go play with the go-carts, you’ll just have to remember this message.  Now, you might be wondering, “What on earth do go-carts have to do with today’s Scripture readings?”  Well, fasten your seatbelts and let’s find out.

About five years ago, I was out in Utah attending a one-day driving school at Miller Motorsports Park.  My instructor was a professional race car driver who had raced on that track many times.  And during the class, we went out and walked part of the track, a section of 3 turns that began just before the crest of a hill.  After a quick left-hander, the second corner was a blind, decreasing radius, right-hand turn as the track quickly dropped away, downhill.  Then, still falling downhill, it immediately turned backed to the left before entering a long straightaway.

The natural instinct for most people is to look at the track right in front of them, or worse yet the bumper of the car they’re following.  But our instructor told us that when he came over this hill, his eyes were always focused almost a half-mile away, to the left, down at the very end of that long straightaway.  It’s counter-intuitive.  It goes against everything that feels right.  But, if you want to be fast, that’s the only way to do it.  You have to re-learn everything you thought you knew about driving.

It’s a very similar story when we look at today’s Epistle reading.  Paul told the believers in Rome that everything that happened to them was working for their good.  Regardless of what date scholars might give to his letter, Paul’s readers had experienced periods of persecution, including even being kicked out of the city for periods of time.  And this was several years before Nero even came to power.  So it was only going to get worse.  But in his letter, Paul was telling them that all of those events (even the bad ones) worked for their GOOD!

What do you think?  When someone in your family experiences a sudden illness, or maybe they’re badly injured in a car accident.  How can that be good?  It certainly doesn’t feel good!  It’s agonizing.  It’s terrible; even if you are just watching someone else go through it.  But, if we look a little closer at what Paul actually wrote, we see that Paul wasn’t saying that everything that happens in this world is good.  He was saying that, even when bad things happen, they will benefit the Christian in some way.  Paul was trying to get them to look ahead, to look past their current circumstances, to look ahead to a future hope, to a place that they couldn’t even see yet.  That’s more counter-intuitive than telling a driver not to look at the road right in front of them.

Now, the reason a racecar driver can focus so far ahead is that he has trust; trust in the engineers and mechanics who set the car up, trust in the laws of physics, trust in the hours of practice, knowing how the car has behaved in the past.  Well, Paul was telling the believers in Rome why they should have trust, why they should trust God even when things looked bad.  But his list in verses 29 and 30 didn’t just appear out of thin air.  Paul had been building up his case from the beginning of his letter.  This means we might want to know what he’s already said.

So, here’s a paraphrased snapshot of the high points; maybe not quite in the same order Paul had them.  But nonetheless, Paul talked about the fall of humanity, of the world, into rebellion against God.  Adam (the first man) disobeyed the one command God gave him.  He sinned against God.  He passed on that sin to everyone after him.  It’s kind of like passing on damaged DNA.  People were completely unable to fix this by their own effort and they still are today.  It’s just just like a person can’t fix their own genetic defects.  And the result of this was death; spiritual death and physical death.  Both Jews and Gentiles were subject to this death.  One died under the Law.  The other died without the Law.  But they both died.

Then Jesus came, the second Adam. And through this man, Jesus, God began to re-create His creation.  Through Jesus, righteousness re-entered the world.  And He did this by dying.  Jesus’ death destroyed any legal claim that sin and death ever had over creation.  And His resurrection, that brought righteousness and life.  The Law could never have done that!

The Law never had that kind of power, the power to give life.  It only had the power to take it, to reveal disobedience, to reveal sin.  Faith, on the other hand, faith in the promise of God, faith in the work of Jesus’ life, death, and resurrection was (and still is) the only way to be made right before God.  This was true even for Abraham.  The book of Genesis said that Abraham believed God’s promise and, because he believed, God counted him as righteous.  That was way before the Law was given.  In fact it was even before Abraham was circumcised!

How is all of this possible?  Well, it’s pretty simple.  Paul told the Roman believers that once a person was dead, sin no longer had any power over them.  So, Hey! If you’re already dead, you’re good to go.  You might be thinking, “Uhhhmmm…. Thanks, that sounds great Paul….NOT.”  But just hear him out.  In chapter six, Paul wrote these words, “Do you not know that all of us who have been baptized into Christ Jesus were baptized into his death?  We were buried therefore with him by baptism into death, in order that, just as Christ was raised from the dead by the glory of the Father, we too might walk in newness of life.”

And believers who have been baptized have already died.  They died when Jesus died.  They were buried in the tomb with Him.  And they have also been raised with Him.  All of this is a current spiritual reality, and all of this is so because Jesus experienced it physically.  Even more importantly, when Jesus returns, every baptized believer will also experience it, physically!  That’s why Paul can tell the Romans that they were predestined to be conformed to Christ’s image.  Jesus had become the ‘firstborn’ not because of His incarnation (when He was conceived by the Holy Spirit), nor because of His virgin birth; but because of His resurrection from the dead!  He is the first.  But He won’t be the last!

So, “What then shall we say to these things? If God is for us, who can be against us?”  Now we’re looking all the way down that track; to the very end of that long straightaway.  We know where we’re going.  And we can trust the One who is going to get us there.

So, yes, Satan will bring charges against you; sometimes through people you thought were your friends.  Satan wants you to think that you’ll be condemned.  After all, he’ll remind you, “Don’t you remember all of those times you fell short of God’s perfection; remember all those times you screwed up?”  Satan will even try to separate you from Christ.  How?  Well, take a look at Paul’s list again: tribulation, distress, persecution, famine, nakedness, danger, even the threat of death.  The enemy of God will try to use all of these things, things that look (and feel) very bad, to try to destroy our faith.

Yet Paul echoes Joseph when he said that the things Satan means for evil, God will use for good.   Still, when you’re in the middle of those circumstances; if you’re being targeted at work because of your faith, if you’re wondering how you’re going to make next month’s mortgage payment, if you’re dealing with a life-threatening medical issue, or you’re struggling with depression so dark that you can’t even breathe, please, please, hear these words.  We have hope.  It is a hope in something that we cannot yet see.  But it IS certain!  And it WILL come!

“For if we have been united with [Jesus] in a death like his, we shall certainly be united with him in a resurrection like his.  We know that our old self was crucified with him in order that the body of sin might be brought to nothing, so that we would no longer be enslaved to sin.  For one who has died has been set free from sin.  Now if we have died with Christ, we believe that we will also live with him.  We know that Christ, being raised from the dead, will never die again; death no longer has dominion over him.”  And Therefore, death no longer has dominion over us!

That’s why we can believe Paul when he writes, “For I am [convinced] that neither death nor life, nor angels nor rulers, nor things present nor things to come, nor powers, nor height nor depth, nor anything else in all creation, will be able to separate us from the love of God in Christ Jesus our Lord!”  So we can stop focusing on the circumstances right in front of us.  We can look all the way down that track, to the hope that we have in Christ, instead.

A famous racing instructor, when he would see a car following him closely on the track, would intentionally drive his corvette off into the grass.  He wanted to see if the student behind him was looking at his bumper, or looking up at the track ahead.  If that student followed him off track….well, they had a little talk when they got back to the class room.  You’ve got to keep your eyes UP.  You’ve got to look where you want to go, not at what you don’t want to hit.  Wherever you’re looking, that’s where you’ll end up.

So, be confident!  Look UP!  Because Christ is Risen.  Nothing can take that away from us.  And that IS the peace which passes all understanding!  May it guard your hearts and minds in Christ Jesus unto life everlasting, Amen!