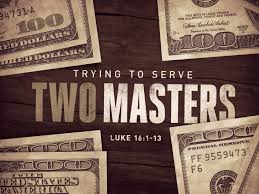 Today, we are going to talk about money. Now fear not…this is not your annual stewardship sermon. We are going to talk about how we usually approach money. Money is often our god. We don’t want to admit this, but it’s true. Money is a really persuasive false god. Money is like the little devil we used to see in Saturday morning cartoons who sits on your shoulder and whispers into your ear: “Now listen to me. I’ll give you a little freedom to do some things, but in the end, you will make all the important decisions in life on the basis of me. I’ll let you enjoy a little bit of time not thinking about me, but when push comes to shove, I call the shots. Understood?” Is this not the case?

You have in this Gospel text today a parable; the story of a man who had been accumulating wealth (illegally) for himself. He was trusting that the needs of his life and his future would be secured through this pile of money he was hiding. Now he was, we’re told, cooking the books, skimming money off the top, but like all of us who break the Commandments, he’d figured out a way in his mind to justify what he was doing. He told himself he’s overworked and underpaid. He’s going to pay it back. He needs it more than his master. Whatever the reasons in his own mind, his master’s money was the solution. It was the thing in which he trusted. He wanted it. He took it. He got caught.

Well, you can’t trust false gods. And money is a false god. It doesn’t care about you. It doesn’t love you. And it will leave you. That’s what happens in this parable. Everything this steward had been lying awake at night afraid would happen, happens. His money is gone. His job is gone, and he is left now to figure out something different in which to put his trust. What will it be?

“And (the manager) called him and said to him, ‘What is this that I hear about you? Turn in the account of your management, for you can no longer be manager.’ And the manager said to himself, ‘What shall I do, since my master is taking the management away from me? I am not strong enough to dig, and I am ashamed to beg” (vv 1–3). I’d like you to pay attention to the steward’s desperation. He’s stuck. That’s why Jesus includes his comment, “I can’t dig; I can’t beg.” His ship is sinking, and he doesn’t have a lifeboat. Everything he’d worked for (a lifetime’s worth of careful effort and planning, even if it was crooked) was gone. If you haven’t been in his shoes, I trust you all have had a moment where your life as you knew it was over. That everything from that moment on would be different.

Well, the steward was fired. From that point, he was no longer legally authorized to conduct any business in the name of his master. And if he did, it wouldn’t be legally binding. But take a moment to notice that the master does not throw him in jail. He could have, but he didn’t. You may work for a company, or heard of one, where when they do mass layoffs, the police or private security are called in and everyone who is fired is escorted out. They have to do this because they recognize that angry or desperate employees can do a lot of damage if they aren’t led off immediately. That is not what this master does. He lets the steward meander home, get the books, and return.

So, the steward uses this small amount of time to take advantage of his master’s reputation for being generous. He had been trusting in his master’s money, but that’s gone. Now he begins to trust in the thing he should have trusted in all along: his master’s generosity.

He quickly calls in each of his master’s clients. Now, here’s the key. The steward is fired, and he knows that, and the master knows that, but no one else does. The clients don’t know it. So, one at a time, the steward calls in the clients. And here’s how he does it. “He said to the first, ‘How much do you owe my master?’ He said, ‘A hundred measures of oil.’ He said to him, ‘Take your bill, and sit down quickly and write fifty.’ Then he said to another, ‘And how much do you owe?’ He said, ‘A hundred measures of wheat.’ He said to him, ‘Take your bill, and write eighty’ ” (vv 5b–7). He cancels about eighteen month’s wages with each account. But did you notice that he has them change the amount? It happens in their handwriting, not his. This is an important detail, and the reason is this: the next thing the steward will do is take all these changed contracts back to the master. And when he places the books on his master’s desk to review, the master slowly realizes two things: first, these debts have been lowered, and second, the debtors know about it, because it’s in their handwriting. If it had been merely in the steward’s handwriting, he would just change them all back and there wouldn’t be any harm; no one would have known.

But now the master sits back in his chair; he can hear the sound of a celebration party thrown in his honor—in honor of the most generous landowner that county has ever known. They’ve already begun to post Facebook® updates about how good and kind their landlord is. After all, they all assume that the steward just did what the master asked.

What would a normal landlord do? Well, of course, he’d walk into that party, and he’d announce, “All right, turn down the music. Stop the party. Everything that happened today was illegal. I didn’t authorize this. The steward is a crook. And so, I’ll be expecting your regular payments at the beginning of the month.” Yes, that’s what any ordinary creditor would do. (That’s what you would do, right?) And if that’s what he did, the steward’s plan would collapse. But he doesn’t do it. Not this master. This master has a reputation for being generous. Because he is generous.

He looks up at his former steward and says, “Well played. You knew me. You knew that I would let this stand. You’re a crook and a scoundrel, but you’re really smart.” The text says, “The master commended the dishonest manager for his shrewdness” (v 8a)—commended him not because of his character or ethics, but because of his shrewdness. When his ship was sinking, he knew which way to jump. How does this help him? Well, he’s used the master’s generosity to make lots of friends. You know the phrase, “It’s not what you know; it’s who you know.”

The moral of the story? Well, usually people preaching on this text will say that God wants us to be as smart as our enemies, or we are to make the best use of our resources. I do not disagree with these things, but I think the moral to the story is that we are to put our trust in our very generous, merciful Lord. The dude in the parable tried to get ahead by his scheming, his planning, his conniving but in the end, he banked on His boss being generous and His boss had always been generous. And he was generous again. Merciful.

Let’s look at it this way. You know how when we were kids, we knew that we better not get into too much trouble or dad would give us a beating? Remember in the movie “A Christmas Story” how Ralphie got into a fight with Scott Farcas, and afterwards the mom hears the little brother Randy crying and finds him in the cabinet under the kitchen sink, saying “Daddy’s gonna kill Ralphie!” Have you known that fear? I knew that fear…there were a couple of times in my life, not many because I was a good boy, but there were a couple of times I knew that fear. But in this parable, from God’s perspective, the emphasis is not on the shrewdness of the embezzler, it is on the mercy of the lord, the landowner.

When we have those times when we know we have done wrong, where we were caught red handed, and we think that what we did is so bad that God cannot or will not forgive us, this text (and others) tells us that where there is repentance, there is forgiveness. Jesus didn’t die and rise again for some sins, or most sins, He died and rose again for all of our sins, everyone’s sins. Now this does not mean that we can just do whatever we want and God will keep giving us the get out of jail free card. That is not how the Christian life works. But when we who have faith repent of our misdeeds and mistakes, our merciful Lord tells us we ARE forgiven.

So then, if you’re stuck and you don’t know what to do or where to go—if you’re too weak to dig and too ashamed to beg—don’t defend yourself and try to get out of this on your own. If your ship is sinking and you don’t know which way to jump or what to grab hold of, jump on—grab hold of—the generosity of your Father in heaven. Truly Shrewd Stewards Are Christians Who Put Their Trust in the Generosity of the Lord. Put your eggs in that basket. Plead the mercy of God in Jesus Christ, His death and His resurrection, and it’s yours. You’re going to be okay. You’re going to make it. God is Generous!

Adapted from a sermon in Concordia Pulpit Helps: Vol. 26 Part 4.