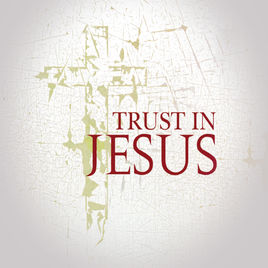 One of the most devastating experiences a person can have is realizing that people aren’t trusting him or her. Can you remember a time when you wanted desperately to be trusted, yet all your friends could think about was a time you let them down? (Eighth Grade Basketball Bus) Have you ever told somebody, “Hey, trust me.” And they said, “Nope.” That is not a good feeling, is it? And here we are on the Sunday after Easter, talking about Thomas AGAIN, and God asks us to trust Him by faith. Today our Thomas discussion is going to be centered on the fact that God looks at us and says, “Trust Me.”

Trust is something that is easier to come by at some times, more than others. Bill Clinton trusted the North Korean Leader in the 1990’s when he offered a deal for big bucks in aid in exchange for the promise that they would not build nukes. We know how that worked out. Elin Nordegren trusted Eldrick Woods (you might refer to him as Tiger, I always refer to him by his real name) and we know how that turned out for her. Matthew trusted our neighborhood roaming cat Thomaso, until the cat bit him. Would you trust these ads/products: “Marriage Counseling Services, by Donald Trump”; “New Investment Opportunities, by Bernie Madoff”? Would you buy these books: “Chivalry” by Harvey Weinstein, or “Healthy Eating” by Jim Gaffigan.

In some areas of life, evidence is available, and trust isn’t as necessary. Let me give you an example: If you need a better line of credit, you might provide evidence of income and a past history of loan repayments. Or in business, you might offer a money-back guarantee to win trust. Of course, in our cynical times, we hear “money back guarantee” and figure, “Yeah. Right.” Although I can tell you…You may recall that the day after Christmas I had to put a new alternator in my white Honda. Seven weeks later that new alternator died. I was given a warranty sheet, but I figured when I put the claim in, I would never see my money. Two weeks later, I got a full refund. But I am still not going to that mechanic ever again…

When it comes to Thomas, it would appear that he did not entirely trust the other apostles. The other ten (Judas is dead at this point) weren’t convincing enough for Thomas to believe them. Now you might be thinking that the 12 (other than Judas, maybe) were one big happy family. But the Gospels make very clear the apostles had their arguments, issues, and they were constantly trying to raise their own profiles at the expense of the others. They bickered and argued and were not always the best of friends.

Also, consider this: think of how this looked to Thomas. The disciples have been meeting “with the doors locked for fear of the Jews,” though Peter and John have seen the empty tomb. John wrote that he “saw and believed” (20:8), and Mary reported, “I have seen the Lord!” (20:18). But even after Jesus’ appearances, the disciples remained locked up and afraid (as they were a week later, v 26). The 10 apostles told Thomas they had seen the risen Jesus, but they were still holed up in their little hiding place, instead of running around Jerusalem yelling the Good News! This is not the behavior of people who are living like Jesus rose from the dead! We are always calling Thomas: “Doubting” Thomas. Maybe he was just “Untrusting Thomas.” Those who had seen Jesus were not living like they had seen Jesus.

If you think about it, we may be guilty of the same thing. We lock ourselves behind our anxiety over what the neighbors would think (e.g., if we’d pray out loud in a restaurant), or worry about financial hardship (e.g., if we’d write our offering check before paying bills), and our fear of failure (e.g., if we’d try to tell someone what we believed). No wonder they trust our witness as little as Thomas trusted the witness of the other apostles!

Here is the point of what I am trying to get across to you today. God wants us to put our total trust in our risen Lord. Period. Remember those book titles I told you that nobody would buy? Here is one we should buy. We could entitle the Bible “Trust Me,” by God Almighty.

On Easter every disciple and friend wanted proof before coming to firm faith. None of them were like, “Oh Yeah!” Even John, though he believed at the tomb, did not show confidence as he joined the others in the locked room, still fearful of the Jews.

Thomas trusted in Jesus and what He said, but only after he saw the Proof. Again, think of this through Thomas. Though the doors are locked, Jesus is suddenly present. The evidence he demanded is plain to see; the one who died has returned to enable trust in His victory. Thomas did not deserve this, and, overcome with joy, he said, “My Lord and my God!”

The reality then, for us, is the Bible tells us everything we need to know, to believe, and to trust in God. God inspired the human writers of the Bible to include precisely what we need to read and to nurture the faith relationship He gives us by grace. As Luther liked to say, “Everything God wanted you to know about Him is in the Bible. If there is a question you ask that is not answered by the Bible, then God does not want you to ask the question.” God gives us faith. (Either in Baptism or through His Word.) Soren Kierkegaard wrote, “Christ enters through locked doors.” As our Lord came to the disciples, so He comes to us through the Word, saying, “Trust me.”

And God strengthens existing faith. God does that with the Word. Our text is the author’s message, the commentary God inspired about the rest of the Bible. “These [the signs] are written that you may [continue to] believe that Jesus is the Christ [the Messiah], the Son of God” (Jn 20:31). Jesus said, “the Scriptures . . . testify about me” (Jn 5:39). And just as Jesus said it to Thomas, He says to each of you, “Blessed are those who have not seen and yet have believed.” Wouldn’t you like to have stronger faith and fewer reservations? Wouldn’t you like to avoid Thomas’ fears and doubts? Then expose yourself continuously and constantly to God’s Word, and His Sacraments, and His people, and His Church.

We believe; we need help with our wavering. God’s “track record” is seen in Scripture’s record of the promises He kept to Eve, Noah, Abraham, Moses, David, and many other promises realized in Jesus on Easter. Our study of the Word and our reception of Holy Communion provide the needed encouragement for a deeper trust.

Would you like to trust God more deeply? Listen to Him speak to you daily through the Bible. Commune with Him regularly at the altar. And do what God tells you to do when He says to you, “Trust Me. I got this.”