“To Whom Do You Listen?”

“To Whom Do You Listen?” 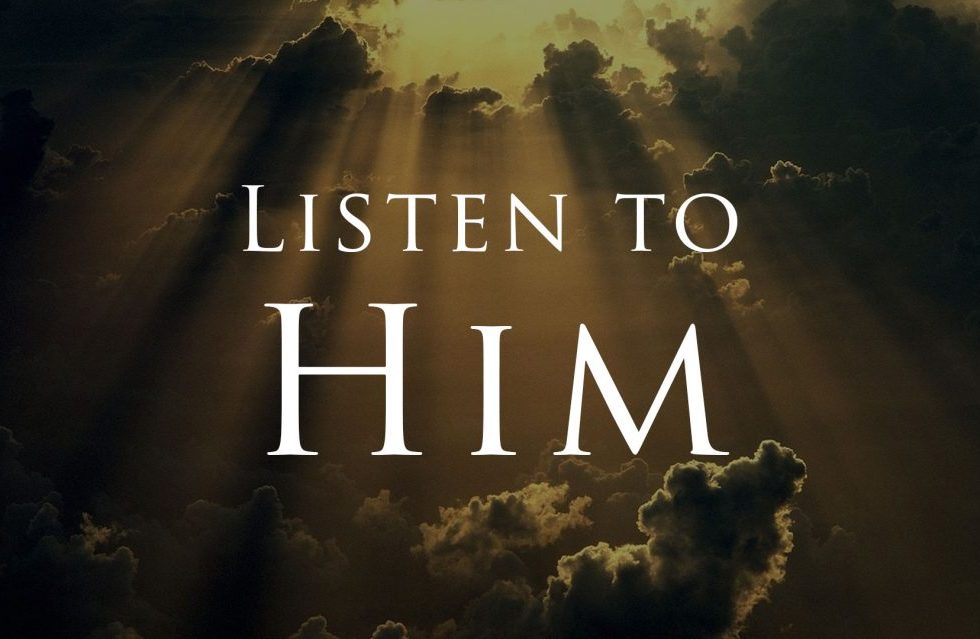 To whom do you listen? Lots of voices out there, yelling to get our attention. TV, Radio, Internet. Spouses and Kids, too, right? Millions of dollars being spent on commercials for you to watch the Super Bowl next weekend. You probably won’t remember any of them in a month. It is a thing for many of us, when we don’t know how to fix something, to go on YouTube and have someone tell us. But how do we know they know what they are doing? To whom should we listen? These days it seems everybody is putting something in our ear—politicians, reporters, bosses, actors, everyone who is on Twitter. Half of it we don’t believe, and the other half, well, we’re a little wary. We probably should be.

Problem is, a lot of people are just telling us what they think we need to hear, and a lot of times we don’t want to listen to what we really do need to hear. So we don’t listen. Like in that kids game Telephone. Remember? People are sitting on the floor in a circle. The first person whispers a message in the next person’s ear. That person then whispers the message to the next person. It goes all the way around the circle until the first person finally hears the message again. The message is always different, sometimes not even close. I was at a chaplain training event and it was a class on listening. We did this. And a message that was about two guys fishing ended up being about a family going to the mall to get pretzels, after a wedding, in a thunderstorm.

In our text today, Moses, the man God had used for the last forty years to pass along His words to the people of Israel, is about to leave, is about to die. So the frightening question for Israel then was to whom would they listen with Moses gone (The answer then was Joshua, but I’ll get back to that.)? Today we ask to whom should we listen? In our text, God gives us His answer. The Lord Our God Has Raised Up a Prophet like/better than Moses to Whom We Should Listen.

Remember, we started with all the voices and things we hear. Lots of folks vying for our attention. As Moses warned, there are plenty of false prophets out there trying to get us to listen. In our text, Israel was about to enter the Promised Land, where the folks who lived there were the opposite of what God wanted His people to be. In the verses before our text, God lists what kind of things were going on in Canaan, and that the Israelites were not to do this stuff. The people of Canaan were into fortune-telling, divination, consulting the dead, and even child sacrifice. These were all ways of seeking a word from the gods to get advantage in life. And all of these were things that God says are an abomination.

Now you might be thinking the old “That was then, this is now. This stuff no longer happens.” Well, there are folks around the world still doing ritual human sacrifice (India, Africa). When it comes to fortune telling and talking to the dead, there are many in America who make use of, or consult, fortune tellers or horoscopes or Ouija boards or psychics. There is a “psychic” right here in Edmond. Those are some of the false prophets/beliefs Moses talked about.

But then there are other ones. We have some pretty slick false prophets these days: televangelists who go on TV and say there is no sin and teach that feeling good about yourself is worship to God. Then there are those who preach prosperity gospel—believe, believe enough and you’ll prosper, you’ll be rich.

Some false prophets may be sincere, some may just be plain frauds. But either way, words not from the Lord are false and dangerous. We must only listen to a prophet like Moses—a prophet who speaks God’s Word (vv 14, 20). Let’s look back at that list of stuff that happens today. Things like fortune-telling and Ouija boards are actually inviting the devil to speak to us.

And what about those other false teachings? The Bible clearly teaches there is such a thing as sin, but some folks don’t want to hear that because it makes them feel bad. And as to those promises of prosperity, nowhere does the Bible say that faith will make you a millionaire.

Moses clearly had Jesus in view—even though He wouldn’t come for another 1,400 years. Jesus’ earthly ministry demonstrated that He was the very Son of God. This morning’s Holy Gospel is evidence of that. The people were amazed that Jesus, in word and deed, showed such authority. And the demon knew exactly who He was: “the Holy One of God” (Mk 1:24). Jesus is God!—so when He speaks, it’s always the Word of God.

And, yes, we must listen to Him (vv 18–19). At the Baptism of Jesus, just three weeks ago, God announced that all are to listen to Him. The reason we must listen to Jesus is that He is the way of salvation. No other prophet but Jesus was crucified and raised up to free an entire world from sin, to proclaim eternal life to all believers. So we must listen to this Prophet, Jesus, who speaks the Word of the Lord to us.

To this Prophet, then, prophet with a capital P, we can listen. Jesus’ words from the cross “It is finished!” are the words we most want to hear. God raising Jesus up from the dead is His word to us that we are forgiven.

And we still get to hear this Word, His Word today. Where? Well, if you have a Bible app on your phone, anywhere. But Also Here! You get to Hear God: when God’s words in our text are read, given to us by Moses in this case, when the Absolution is pronounced, when Jesus says, through me, that from this altar you are receiving His very body and blood, in, with, and under the bread and wine. This is what you hear when the Word of God is proclaimed to you—Jesus, the final Prophet, died and was raised up by His heavenly Father FOR YOU. And that by what He has done, you are loved, forgiven, saved.

Let’s end with this. Ken Klass told this story in a devotion a few years ago. The story is that forty-six-year-old Philip Harper showed up at his local pub wearing a SWAT cap and showing off his new bulletproof vest. Mr. Harper asked if there was anyone who might be willing to help him test it out. One guy was. The two men put about 20 feet between them. The other guy, his name is Catley, aimed his shotgun and fired. He hit his friend’s bulletproof vest dead center. In rapid succession the following things happened:

1. The men found out the bulletproof vest wasn’t.
2. They realized the plastic-lined vest while not bulletproof also concentrated the shotgun’s blast. Immediately, Catley rushed his pal to the hospital where Harper was pronounced dead.

Mr. Catley went on trial for the murder of his buddy. In his ruling, among other things, the judge acknowledged Catley’s “remorse is complete and genuine” and “the effects of killing your good friend will last with you for the rest of your life.” Then the judge pointed out that the risk of death or serious injury should have been “absolutely obvious.”

Now you might think this is a one-of-a-kind thing, but there was another situation like this in South Carolina, and another in Maryland, where people died after their friends missed their bulletproof vests and killed them. They also had flirted with “absolutely obvious” danger, and they had lost.

Now I can hear you all thinking how unbelievable that is and that nobody should be tempted to do such a thing. Well, my friends, people do flirt with dangerous temptations, and they do it regularly. Adam and Eve brought sin into this world when they disregarded their Creator and followed the suggestions of a talking snake. Time and again we humans have looked at a temptation and thought, “Hey, I can handle that dangerous situation.”

Recognizing we have lots of voices out there trying to get us to listen, whether it is your neighbor, your co-worker, someone in Washington D.C., companies like Chipotle, Huggies, Scott’s Fertilizers, Anheuser-Busch, Frito-Lay, or the devil himself, we should listen to the Lord who loves us and has given His Son to save us from our sin and rescue us by His death and resurrection.