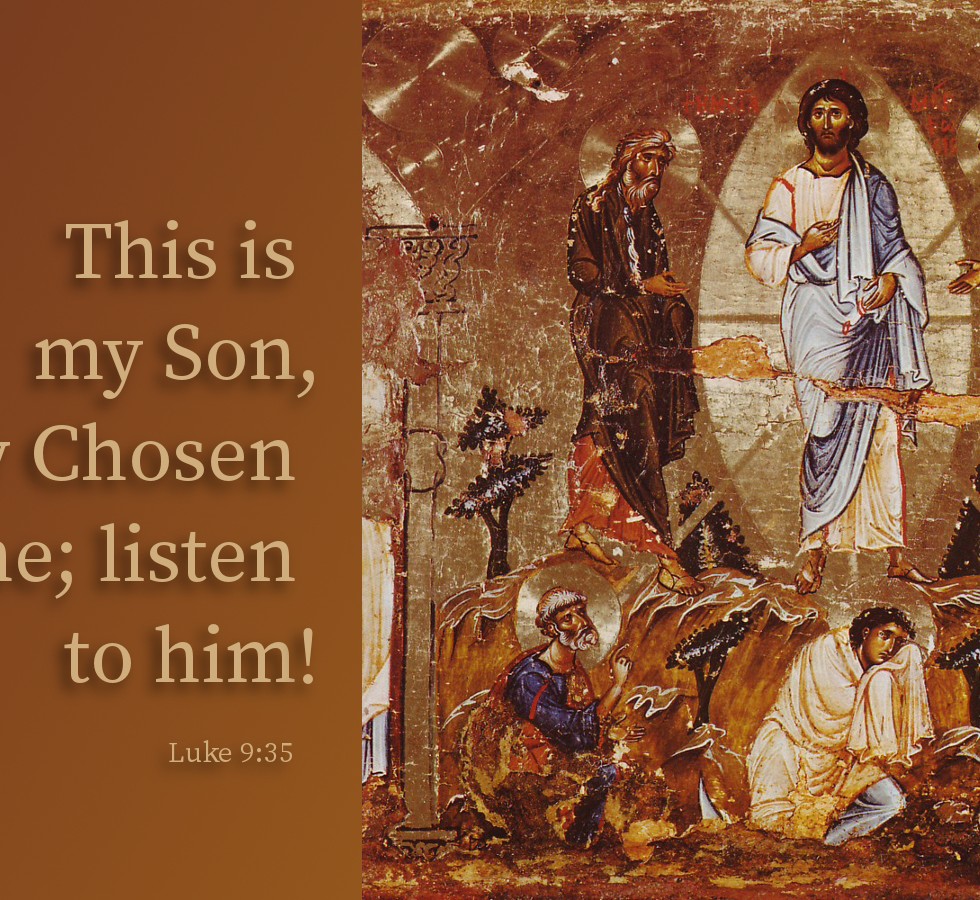 At times, it can seem like what you are doing is never going to end. Like being in the dentist’s chair, or waiting in traffic, or watching the media build up to the Super Bowl. In the novel Catch-22, the character Dunbar reflected this as he wanted to live as long as he could. He did only things he hated so that time would go slower. Sometimes, it’s something more serious—like struggling with depression and feeling that the cloud will never lift, or missing a loved one and feeling as if the loneliness will never go away. In today’s Gospel, Jesus has a message for us about things that will end and things that will not end.

To fully appreciate what’s happening in our Gospel, we first need to rewind a bit. Our reading begins with these words, “Now about eight days after these sayings” (v 28)—which naturally makes us wonder what had been said eight days earlier.

About eight days before the Transfiguration, Jesus had asked His disciples, “Who do you say that I am?” Peter had responded with the great confession that Jesus is the Christ—the long-awaited Messiah (9:20). Nothing wrong with that.

But what Jesus said next must have sounded anything but good to the disciples. Jesus said, “The Son of Man must suffer many things and be rejected by the elders and chief priests and scribes, and be killed, and on the third day be raised” (9:22). This was a lot for the apostles to take in! Rising from the dead must have been something they had some questions about, but the part about being killed was all too clear.

And they’d barely had time to begin digesting that message about what lay ahead for Jesus when He followed it up with some difficult words about what was going to happen to them. Jesus said: “If anyone would come after me, let him deny himself and take up his cross daily and follow me. For whoever would save his life will lose it, but whoever loses his life for my sake will save it” (9:23–24). That was the future for these men. Their Messiah would be killed, and they would live lives of persecution and suffering for their faith as well.

Now that was something they didn’t want to hear. Was that really where all this was leading? Were cross-bearing and dying the only thing in the future for Jesus and the twelve apostles?

With that background, let’s now fast-forward eight days from that conversation to the events of our Gospel.

Jesus takes Peter, James, and John up on a mountain to pray. And what they see there is like nothing they’ve seen before. Jesus is transfigured (meaning his appearance changes). His clothes become dazzling white, and even the appearance of his face changes. Matthew’s account tells us that Jesus’ face “shone like the sun.” And there with Jesus are Moses and Elijah, two great heroes of the faith from centuries past. And so we are clear, they were there! This is not just some spooky vision; they were alive!

This revelation of Jesus in His divine glory is a confirmation for the apostles that, just as Peter had confessed eight days earlier, Jesus really is the Christ, the Savior, the Promised One. What they got to see that day was a little peek at heaven; they saw what Jesus looks like at home, as opposed to here. To leave no doubt, God the Father said on the mountain, “This is my Son, my Chosen One; listen to him!” (v 35).

And why did the disciples need that message at that time? So they could know that suffering and death will not be the end for Jesus. This one who would suffer and die is the Son of the living God, and death cannot hold Him. As the disciples saw with their own eyes, Jesus is the light of the world—the light that the darkness cannot overcome. Yes, He would suffer and die. But suffering and death cannot and will not be the end for Jesus, who was standing in front of them all white and shiny, radiant in divine, heavenly majesty.

Cross-bearing and death would not be the end for Jesus, and it wasn’t the end for Jesus’ disciples. The living presence of Moses and Elijah on the mountain testifies to the glorious future that awaits all who live in faith. Moses had gone through a great deal in his life. And few prophets had experienced more opposition than Elijah. But that hardship did not last. What had lasted was their fellowship with the living Lord. Moses and Elijah had passed through the temporary trials of this life into eternal joys at God’s right hand.

And so it is for all who believe. As seen in Moses and Elijah, suffering is not the end for those who trust in the Lord. Instead, a crown of life, eternal life awaits. THAT does not end.

Does that promise of glory mean, though, that the cross-bearing can somehow be skipped over? Just as we might sometimes wish we could follow Jesus without taking up our crosses, Peter also seems to have hoped along those lines, as he offered to build tents for Jesus, Moses, and Elijah so they could all stay on the mountain.

Peter’s wish is understandable. As he said, it was good for them to be there. But Jesus had something even better in mind. He was set on gaining for Peter, James, John, and us, not just a moment or a day of glory but joys that would be forever.

Luke tells us that, on the mountain, Moses and Elijah spoke with Jesus “of his departure, which he was about to accomplish at Jerusalem” (v 31). It was for that “departure” that Jesus went back down the mountain.

Jesus went down from the Mount of Transfiguration with His disciples so that He could be lifted up for them (and us!) on Mount Calvary. There, He suffered for us so that our suffering will not last. He died on the cross for our sins, so that sin and death will not be the end for us. And He rose from the dead to proclaim the good news that He has made the way for us through death into life eternal.

At times, it might seem as if the hardships of this fallen world will never end. And our Lord Jesus Christ, who has suffered with us and for us, knows how that feels. But take heart. The Lord, who accompanied His disciples back down the Mount of Transfiguration into the sin-filled, chaotic messiness of this world, will also be with you in whatever hardships you face. And the Lord, who was lifted up on Mount Calvary for you, has, by His death and resurrection, made sure that those hardships won’t last. They will come to an end and be replaced by everlasting peace and joy in His kingdom that knows no end.