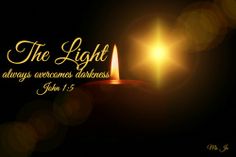 “There’s No Lid on This Light”

We know this to be true, if for no other reason, when God created the light and separated the light from the darkness, He said the light was what?  GOOD.  Ask the folks who live in Barrow, Alaska. They understand that light is a good thing. Barrow is the city farthest north in Alaska.  The sun sets on the afternoon of November 18, and it doesn’t rise again until January 24. The people of Barrow have to deal with  65 days of darkness–65 days when the sun doesn’t shine. Now to be clear, the people of Barrow have artificial light, but most of them can tell you that electric lights are not the same thing as feeling the sun upon your face. Light bulbs don’t answer people’s physical and emotional needs. For two months of the year, the people of Barrow live in a world where the sun never rises. Nobody needs to tell them that January 24th is a day to celebrate, the day when the sun once again peeks over the horizon.

Now if physical darkness is that scary, how much more so is the darkness that is within each and every one of us?  Each night, we see the reports of all types of crimes which have been committed. These crimes have not been done by people who loony, not most of the time anyway.  They’re done by regular people–people like you and me. When their neighbors are interviewed, how do those neighbors usually  describe the accused? “Well, he seemed pretty normal to me. He was kinda quiet, kept to himself.”

There is a darkness inside each of us. I’ve seen regular people, who in the grip of road rage, use their cars like guided missiles, weaving in and out of traffic like Matt Kenseth at the Daytona 500,  cursing and shouting at anyone who gets in their way. I have seen wonderful, loving parents go to a child’s basketball game, football game, any kind of game; or an art contest, a science fair, and go nuts, as they criticize referees, coaches, judges, teachers. I’ve seen people wait in line to buy movie tickets, tickets for a pro game, to apply for a driver’s license. They all seem nice; but when someone, even unintentionally, tries to cut into line, those nice people go wild.
Please understand I’m not pointing fingers here. I have to confess; I understand many of these things, because I’m guilty of many of these things. There is nobody here, if we are being completely honest, that can’t admit to the darkness that is inside of them. We are not happy about it; we may have spent an entire life hiding it, but the darkness is there.
Now, I know you can watch daytime talk shows promoting the idea that there is an untapped well of goodness inside of you. They will tell you that you can change if you do what they say or buy their book.  People have come up with many wonderful ideas, but no human invention can chase away the darkness.  You may be able to keep the darkness at bay, but you know it is there, ready to reappear.

Yet there is hope! Epiphany is all about light appearing. This light “shines in the darkness, and the darkness has not overcome it” (Jn 1:5). Unlike any artificial light, The Promised Light of Jesus Christ Rescues Us from the Darkness and Gives the Light of Life.

Let’s think for a second about the Old Testament lesson and recognize that THE Light was promised by Isaiah the prophet (Is 9:1–4) a long time ago, almost a thousand years before Jesus showed up.  It is also interesting that he focuses on the tribes of Zebulun and Naphtali.  This is of note because those tribes were in the northern part of Israel, and therefore they were the first to be attacked by the enemies of Israel who were north and east.  Those folks lived in the darkness of trouble and oppression by foreign kings.

Now we spin things up to New Testament times.  After hearing of John the Baptist’s arrest, Jesus left the south where He had first appeared on the scene where John the Baptist was preaching, and traveled on up to Galilee.  This was, after all, His home territory.  Nazareth was there.  Now He returned to Galilee in fulfillment of Isaiah’s prophecy.  Therefore, we can see that Jesus becomes the light seen by those sitting in darkness.  Jesus was the light predicted by Isaiah.

Jesus is the only real thing that can fight the darkness.  His life, His death on the cross, His resurrection, His forgiveness, His peace, His wisdom, His strength.  It is only Jesus, what He does, what He gives, that can destroy the darkness.

Now in light of what we discussed last week, we want to note today that Jesus shines on our current culture, too.  The light of Jesus overcomes the darkness out there, that darkness that tries to peddle hope that is false. You know,  the many in our culture that tell women abortion is superior to the nine month “inconvenience” of carrying a child to term and putting him or her up for adoption.   The darkness that says that elderly people should not be such a drain on our medical system, they should just do “assisted suicide” so they will not be such a burden to us.  People are saying that out there!  That is considered wisdom out there!  PBS is going to air a special in September about women they feel are making America great, which features two so called celebrities who are the biggest advocates for abortion out there today.  55 million and counting if you did not know.

The solutions put forward out there by the wise guys ignore sin and death.  And when we Christians instead offer answers from Scripture, the “enlightened intellectuals” of our society often accuse us of being “backward,” “Neanderthal,” “politically insensitive.” But we know better.  Jesus has come with real light: God with us and God for us, all the way to the cross.

Jesus began His preaching ministry repeating John’s words: “Repent, for the kingdom of heaven is at hand.”  This is a kingdom not of worldly power or solutions. His truly enlightened solutions are forgiveness and caring—God for us and us for others.  Every time we meet here we rejoice at what God gives to us.  And each one of us is called to share what we have been given with others.  A couple of ways we are planning to do this as a church include your late service worship team going on tour to nursing homes and the comfort dog we are hoping will arrive this year as a missionary into this community.

Jesus reminds us today that darkness no longer has the upper hand. We have no need of what passes for wisdom out there that offers little result. The only true source and Creator of light has sent His Son, Jesus, to illuminate and eliminate the darkness, pushing back all the evil Satan has inflicted on us. He does this until He comes again! You can’t put a lid on this light. He is always present with His gifts where He has promised to be—here as His healing Word of absolution is proclaimed, here at His Table as we eat of His body and drink of His blood given for the forgiveness of sins.