“The Three Men and the Fiery Furnace”

“The Three Men and the Fiery Furnace” 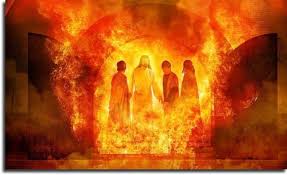 Today we are going to start by talking about heat. Heat can be a good thing, if it is cold out. (OKC Marathon/Hypothermia) But it is my contention that usually, in our daily conversations, that heat is a negative thing. People ask you when you are failing at something: “What…you can’t take the heat?” There is an old saying, it predates me, that goes, “If you can’t take the heat, get out of the kitchen.” Right? And then there is the heat that David Payne talks about. When he uses the word HEAT, it means it is going to be 105 degrees out. And this summer, we had a few days like that.

As we continue to look at the heroes of the Old Testament, today we come to a favorite account of people who prepare Sunday School curricula. Today, on this Sunday that is dedicated to St. Michael and All Angels, we are going to discuss: The Three Men in the Fiery Furnace.

At the time of the book of Daniel, Israel, as a nation, is gone. The northern kingdom has been destroyed by the Assyrian Empire, and its remnant carted off into slavery. And the southern kingdom of Judah has been conquered by the Babylonian Kingdom. Those who survived were basically in slavery to the Babylonians in Babylon. Jerusalem is in ruins. There were four dudes that the Babylonians selected from the Jews to help run the country, because they were especially wise. They were Daniel (who later survived the lion’s den when he refused to worship a different king of Babylon), and three other guys named Hananiah, Mishael, and Azariah. You may not recognize those names, but their Babylonian names were Shadrach, Meshach, and Abednego.

Daniel had achieved some notoriety with the Babylonians because he was able to interpret dreams that the king, Nebuchadnezzar had. (This sounds like when Joseph was able to help out the Pharaoh in Egypt the same way 1200 years earlier.) So while the Judeans were having a tough time in those days, these four Hebrews, as advisors to the King, were looking out for their people in these positions.
Where the plot thickens is that the King decided to put up a big statue of the Babylonian god. He was known as Marduk or Bel. The statue was 90 feet tall and 9 feet in diameter. Nebuchadnezzar was very proud of his new statue, and he sent out a proclamation to all the officials of Babylon that they should come for the dedication of the statue, and he also said that when the signal was given, everyone should bow down and worship this statue and this god. And anybody who did not bow down and worship this god would be thrown into a fiery furnace.

Now as it turns out, there were some government officials who did not like having these Hebrews serving alongside of them. And they saw this as an opportunity to get rid of good old Shadrach, Meshach, and Abednego. I guess because David had helped the King personally, that they couldn’t get him with this. They went to the king and they said that these three dudes did not bow down and worship when called to. Which was true, this was not a lie. These 3 faithful Hebrews (and Daniel as well) were not going to worship Marduk. And when Nebuchadnezzar heard this, he got really mad.

The King ordered that the three Hebrews be brought to him. When they were there, he asked: 1) if it was true that they did not worship the Babylonian gods, 2) if they did not worship his 90 foot statue, 3) if they were prepared to get thrown into the fiery furnace, and 4) what God did they have that would protect them? The three men replied by saying he already knew the answer. They believed God would be with them if they were thrown into the fiery furnace, and even if God didn’t protect them there, they would not worship what they knew was a false god. How is that for some intestinal fortitude?

Needless to say, the king did not take this well. Kings don’t like it when someone tells them “No.” Nebuchadnezzar ordered that the furnace be heated 7 times more than usual. He ordered that the 3 Hebrews be bound, and thrown into the furnace, and the people given that task were in such a hurry, since the King was so mad, they didn’t take the proper precautions and when they opened the furnace door they were killed by the heat. That’s Hot! The second-string furnace operators were able to get the three men thrown into the furnace without getting hurt themselves.

What happened next is rather interesting…because nothing happened. The three men were not killed, not hurt, not scorched…nothing. And not only that, Nebuchadnezzar looked into the furnace and saw FOUR people walking around. He saw our three Hebrew heroes and a fourth guy, who had “the appearance…like a son of the gods.” Those three guys were in that very hot furnace with an angel of the Lord. So the King called out to them to come out, and they (not the angel) came out (there was a door there to empty the furnace). And the King and his officials were astonished to see that the three were unharmed, their clothes had no burns or scorches, and they didn’t even have that charcoal smell. Think about how much one cigarette can smoke up a room or your clothes. This huge fire had no effect on them at all. And Nebuchadnezzar was so impressed he made the worship of Yahweh legal, and promoted good old Shadrach, Meshach, and Abednego. Nebuchadnezzar preferred that these guys and their God were his friends, and not his enemies.

Now once again, we ask what this means to us. One of the things we have noted in all these Old Testament sermons is that they are not about what these people did, they are about what God did, and what God does, and what God will continue to do. And it would be a mistake to think that this is saying that if we have enough faith, nothing bad will happen to us. Shadrach, Meshach and Abednego were not EXPECTING God to rescue them in the furnace, they were not expecting deliverance. They knew very well that their defiance of the king could result in their deaths. But they knew either way, they were in God’s hands, and either way they would be ok. (9/11 parallel)

Like them, we live in a time when our Christian faith is not exactly popular. Bad things will happen to us and be done to us because we are Christians, or just because. For most of you, this has already happened. When we face hardships, that is a time when we are turned back to God. It is at those times we know we need His help. And our faith in God cannot be conditional. We can’t say to Him that we will only believe, or only go to church, when things are going well.

We also have to recognize that there are many times when we fail God and have other gods, whether that is money, or schedules, or sports, or movies, or anything that takes a higher priority at any time over God, which can be just us. And while we are not always faithful to Him, He is always faithful to us. He is always ready for us to repent, always ready to bless us, always there to save us by the death and resurrection of Jesus. And He is with us always.

Our three heroes here today didn’t and couldn’t save themselves. God saved them. While we know there are many movies and songs out there that tell us we should be our own heroes, you can’t be your own hero when it comes to salvation and the fixing of your sins. By His mercy, He rescues us from many enemies, physical and spiritual. And because God loves us and blesses us, and provides for us, and sent Jesus to die and rise for us; because Jesus saved us from our sins and gave us faith, forgiveness and eternal life, we are not going to go somewhere that is really hot, hotter than our summer has been, hotter than this fall has been, hotter than that furnace. You know what I am talking about, right? God has saved you. You are His. And that’s…cool.