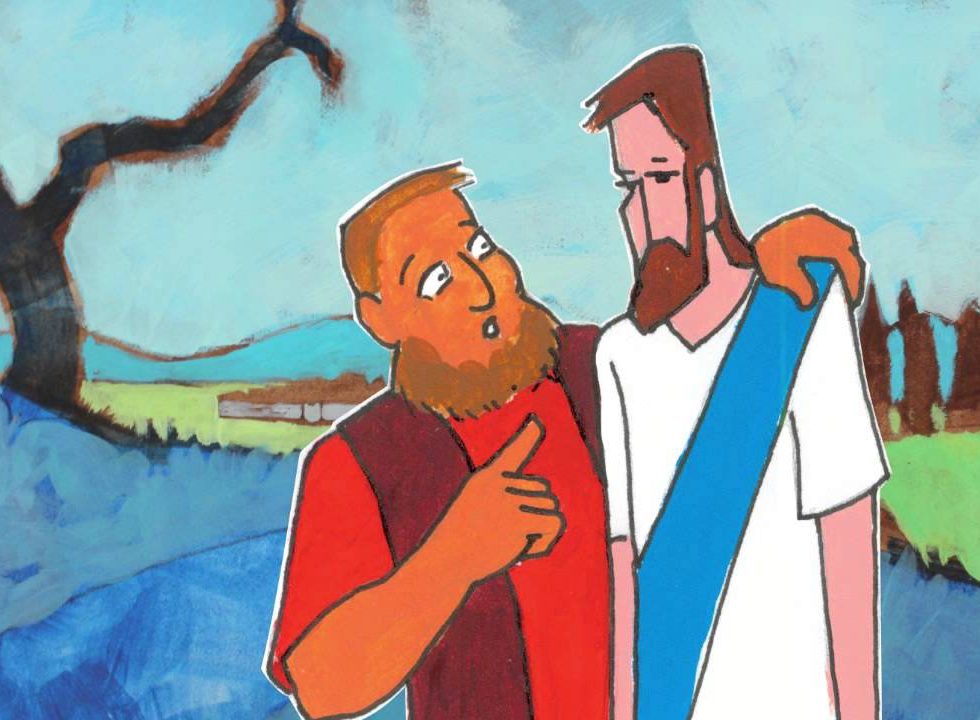 When I am dealing with King Christopher and Master Matthew, it is amazing how often I catch myself saying something that my dad said to me. I can remember many times in my younger days wanting to do something or go somewhere only to be told that I could not. When I would ask why, I would be told “I know what’s best for you,” or else I would hear, “BECAUSE I SAID SO.” Now I get to say that. But the truth is when it comes to our kids, we usually do know, if not what is best for them, at least what is better for them. We see a similar situation occurring in the Gospel for today. Peter thinks he knows what is best for Jesus, but Jesus KNOWS what is best. Today we are going to discuss all this, as we talk about “The Things of God.”

The setting of our text today is just outside of a town called Caesarea Philippi. Jesus had gathered His apostles in this secluded place for some real hands on, face to face teaching. The 12 had been with Him for nearly three years. They had seen many miracles. They had heard many parables. They had watched as the situation between Jesus and the Pharisees got more and more confrontational, and as the Sanhedrin got more and more aggressive with Jesus.

As for the 12, were they ready? Was it time to ask the question that needed to be asked? For all of us who have asked someone, “Will you marry me?,” we know the nervousness of asking a BIG question for which we do not know the answer. I do not think Jesus was nervous when He asked the 12, “Who do people say the Son of Man is?” After various responses were given, Jesus then asked the big one, “Who do you say that I am?” I don’t think He was nervous when He asked that, either. He KNEW what they thought.

After Peter responded by saying “You are the Christ, the Son of the Living God,” which was the right answer, Jesus began to focus in on what He, as the Christ, the Messiah, must do: go to Jerusalem to suffer, to die, and then to rise again. In other words, to continue to carry out the Father’s plan for saving all of us. Peter took Jesus aside and rebuked Him: “Far be it from you, Lord!. . .This shall never happen to you!” Here is the very guy who just moments before had made that perfect confession, “You are the Christ!” After Peter’s bossy command, Jesus then famously said, “Get behind me Satan! . . . . For you are not setting your mind on the things of God, but on the things of man.”

Last week, Peter was behind Jesus — following Him. This week, six verses later, he tried to get out in front, and Jesus told him to get behind again. When we are following Him, we are rocks on which He builds His church. When we move out in front of Him, we are in the way — stumbling blocks to Him and to others following behind. And this is something for which we have to be on the lookout. There are times when each of us has the nerve, the gall, to tell God “Do it my way.” (This is just like my kids. We forget who is in charge, and we think we can give God orders.) Maybe you wanted to marry someone who wasn’t loving you back. Maybe a promotion or career change wasn’t happening and you thought it should. Maybe someone you love was in the hospital and wasn’t getting better. Maybe you prayed for it to stop raining in Houston and wondered what took so long. We have all said to God, “Give me what I want!” But when we do that, are we following? Or are we trying to lead? Jesus tells us to follow.

I know how this works. For example I have read articles that say we Americans like winners. I think all people like winners, not just Americans. I have never heard people from another country say, “Hey let’s follow that guy. He’s a loser!” When we watch sports, like the football we got to watch Friday night where the USMNT played in World Cup Qualifying, or that other kind of football we got to watch this weekend, athletes are often running around with a finger up in the air, “We’re number one!” Even if they just scored to make it 49-7 late in the game! The gesture is common on the littlest of the little league teams to pretty much every professional sport.

Most of the time, there is nothing wrong with wanting to be number one in sports, in business, in school, in lots of things, but it is always wrong in the church. In the church, Jesus Christ is Number One, and there must be no exceptions. We give glory to God, we do not seek it for ourselves. We cannot follow Him if we are trying to be in front of Him.

Let’s go back to Peter. What a roller coaster ride it must have been for old “Rocky.” I mean, think about Peter’s tears on the night of Jesus’ betrayal. Think again about how stunned he must have been when Jesus was killed. Think again, again, at how elated he was at the Lord’s resurrection but, most of all, think of how amazed he must have been when Jesus restored him to both friendship and pastor duty. He may have been “the rock” when he made his confession, but he was of “little faith” on the Sea of Galilee, he put his foot in his mouth at Jesus’ transfiguration, he was a “Satan” in today’s story and a “denier” in the courtyard.
All in all, Peter was a lot like me. (And you.) And that is why I know for sure how much it meant to Peter that Jesus died and rose again for him, for his forgiveness and eternal life. Knowing how big a sinner I am makes me all the more grateful and joyful about my salvation. And we note that the world is full of sinners — just like Peter and me — who also need to know what Jesus did for them.

Home stretch time…Lutheran Hour Devotions shared an editorial with us a couple of weeks ago. I want to share part of it with you. “The world is too big for us. Too much going on, too many crimes, too much violence and excitement. Try as you will, you get behind in the race, in spite of yourself. It’s an incessant strain to keep pace — and still, you lose ground. Science empties its discoveries on you so fast that you stagger beneath them in hopeless bewilderment. The political world is news seen so rapidly you’re out of breath trying to keep pace with who’s in and who’s out. Everything is high pressure. Human nature can’t endure much more.”

So…do you agree with the writer? Does this sound about right? I see nods of agreement. Think that was written this year? Not this year, but you find it in the Atlantic Journal on June 16, 1833. Amazing!
More than 175 years ago people were convinced that life was too complicated and went by too fast. I guess some things don’t change. We get upset at what is going on around us. There is a lot of conflict, division, unhappiness out there. We even get upset with God. We tell God that what He is doing is not fair. That He is not listening. That He is ignoring us.

You should know there’s a problem with that kind of thinking. That’s because the Lord is better, smarter, stronger than us. You may be a Tim Tebow, a Mother Theresa, a Captain in the Cajun Navy, but compared to God you’re a first-class, top of the line, sinner. And, in Ezekiel, the Lord says, “The soul who sins…shall die” (Ezekiel 18:20a).

My brothers and sisters, this is why we need Jesus. This is why we need to follow Him. He was perfect, but He carried our sins. He was innocent, but He was still found guilty. We could go on. Instead, let us quote Isaiah: “But He was wounded for our transgressions; He was crushed for our iniquities; upon Him was the (punishment) that brought us peace, and with His (wounds) we are healed” (Isaiah 53:5).

We rejoice this morning and every day because Jesus was willing to do “the things of God”– to suffer, and die, and rise again. And He willingly did all this because He loves us. Even though we are sinners, He willingly died for us. And God, our Father, accepted His willing sacrifice for us by raising Him to life. May each one of us answer the question “Who do you say (Jesus is)” with a Holy Spirit directed answer, “You are the Christ, the Son of the living God,” and then fill our lives with doing “the things of God.” God knows what is best for us.