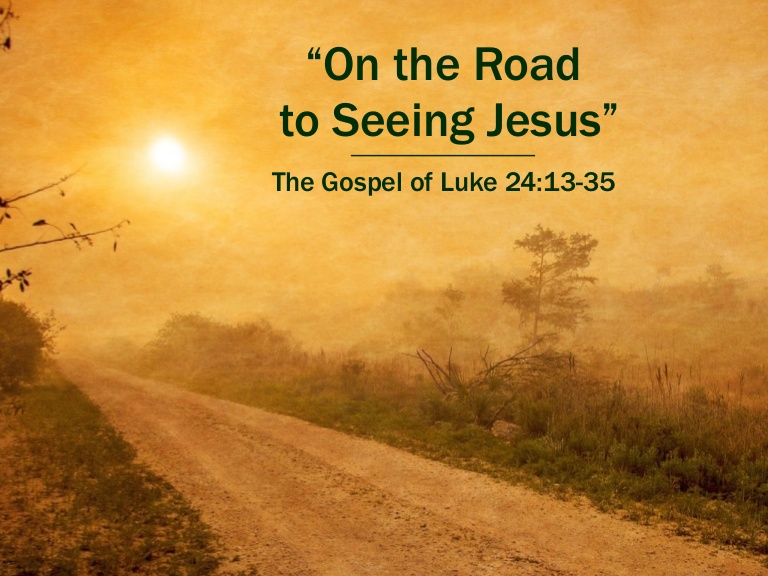 If I start today by just saying the word, “stranger,” where does your mind go from there? The Netflix show? The Billy Joel song? The phrase “stranger danger” we tell our kids to stay away from people they don’t know? Here is why I ask…

In the Gospel for today, Jesus shows up with two of His disciples, but they don’t recognize Him. They think He is a “stranger.” The stranger shows up on the road “but their eyes were kept from recognizing him” (v 16). Just like Jesus to come incognito, undercover as it were. He hides himself. Listen to the prophet Isaiah: “Truly, you are a God who hides himself, O God of Israel, the Savior” (Is 45:15).

God hides Himself sometimes. He will not let himself become visible to those guys on the road to Emmaus. Yet It Is in His Hiding Himself That Jesus Shows Himself to Be Our Savior. That is what we will talk about this morning.

It is not that these travelers on the highway to Emmaus were confronted with a case of mistaken identity. It was not that the Lord Jesus was absent from them. Their eyes were kept from recognizing Him. They could not see Him for who He is. Jesus, for that time, was a stranger. So as the conversation goes on, they tell Him of their disappointments, and now lost hope, that Jesus was dead. They thought He was the one who was going to flush the Romans out of Israel. They thought He was that kind of Savior. He wasn’t…He was a better one.

Then Jesus interrupts Cleopas and his friend: “ ‘O foolish ones, and slow of heart to believe all that the prophets have spoken! Was it not necessary that the Christ should suffer these things and enter into his glory?’ And beginning with Moses and all the Prophets, he interpreted to them in all the Scriptures the things concerning himself” (vv 25–27). Still didn’t recognize Him. But when they get to Emmaus, they urge Jesus to stay with them, and He does for a while. He takes for Himself the place of host, blessing and breaking the bread, and He gives it to them. “And their eyes were opened, and they recognized him” (v 31). Now they recognize that this stranger with them is none other than Jesus! The same one who was crucified, the very one on whom their hopes were pinned is now alive and right there in the dining room with them. No phantom, no ghost, but Jesus! Yet when their eyes are opened to see who it is, who is actually with them, He disappears.

Now you might be wondering why Jesus did that. The truth is that Jesus can do whatever He wants to, bodily. He can show up in a locked room. He can disappear from a house. He can show up on a beach and eat fish. His body is not confined by geography or time, for it is the Lord’s body. With His body, locked doors are no barrier. With His body, He can go wherever He wants to. But where He puts Himself, He puts Himself for you. God does not invite you to search for Him where He cannot be found in the cosmic reaches of space or in some inner depths. He doesn’t hide where He can’t be found. We know where He is. We are tempted to ask where He is when someone is sick, when bad weather hits, when planes are flown into buildings or a virus is running rampant everywhere. Raised from the dead, He is free to be wherever He puts Himself for you. And you don’t have to doubt where that is. You know where He is.

The Lord hides Himself from those men on the road to Emmaus so that He might reveal Himself to them, to show Himself where and when it pleases Him. And this is how Jesus wants you to know Him: in His Scriptures. He is here. It is the Scriptures that testify of Him—and His opening up of those Scriptures, so that He is preached as the very Son of God, who had to be handed over to evil men, crucified, and resurrected for us. The saving and rescuing that these Emmaus disciples had hoped for had indeed taken place, but it was far greater than what they could imagine. Redemption took place not in some act of political liberation. It happened in the death of God’s own Son, who paid the price of our release not with silver or gold but with His own blood. That is what was necessary! “It was necessary that the Christ should suffer these things and enter into his glory” (v 26). It was necessary for you and your salvation. It has been done. The work is completed for you. It is finished. Jesus Christ was put to death for your trespasses and raised again so God the Father could look at you and say, “Not guilty.”

Yet even after His resurrection, the Lord Jesus hides His glory. He does not overwhelm the road-weary travelers on the road to Emmaus with a blinding flash or Vegas Lights. He comes to them as a stranger whose identity is concealed from their eyes. This stranger reveals Himself in His words that interpret the Scriptures concerning Himself and in the breaking of bread. (Did you get that? That Jesus revealed Himself in the breaking of bread? A reminder He is present in His meal, which we will do again in two Sundays.) And remember what Jesus said in last week’s Gospel? “Blessed are those who have not seen, and yet have believed.”

What the Lord did for the Emmaus disciples, He does for you. Your eyes are kept from seeing Him. There will come a day when we will see Him. On that Last Day, the Lord Jesus Christ will no longer be concealed from our view. Then all eyes will be upon Him, either to their everlasting joy or their eternal shame. Then we will see Him and not anybody else. Then in our flesh we will see our Redeemer as Job confessed in the Old Testament. But not yet. Now to recognize Jesus means that He vanishes from our sight. He hides Himself so that we may learn to hear Him, to trust in Him, for faith comes not by sight but by hearing. Now we are not to see Him; we are to hear Him. We hear Him as He speaks to us in the preaching of His Scriptures, His words that are spirit and life. You hear Him in His word of absolution that declares, “Your sins are forgiven.” You hear Him not at that ordinary supper table at that road stop near Emmaus, but at His Holy Supper, where He gives you His body to eat and His blood to drink for the forgiveness of your sins. You may not be able to see Him, but he is with you, because He promised: “And behold, I am with you always, to the end of the age.” He is with you when you are sick. He is with you when bad weather comes. He is with you when planes fly into buildings. He is with you when a virus is around everywhere. He is with us, He loves us and He forgives us, because He died and rose for us.

“And their eyes were opened, and they recognized him. And he vanished from their sight” (v 31), but not from their hearing: for “faith comes from hearing, and hearing through the word of Christ” (Rom 10:17). Jesus is no stranger…He has made sure you know all about Him. He is with you all the time, everywhere you go, loving, forgiving and blessing you.