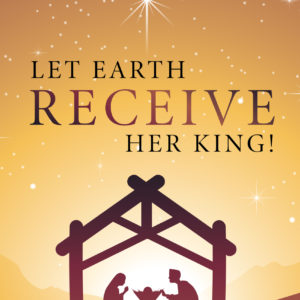 If you didn’t know better, you might think we’ve gone on fast-forward today and jumped ahead to Palm Sunday. Here it’s just the First Sunday in Advent; many haven’t put up their Christmas trees yet or baked any cookies. Yet we seem to have skipped right over baby Jesus, and the manger, and the Wise Men and gone directly to the streets of Jerusalem, thirty-three years later, to lay palm branches on the road and watch Jesus ride past on His way to die. Did we miss something here?

No, I’m not making a mistake here. The Church this First Sunday in Advent directs her attention to the final chapter in the saga of salvation. And that’s as it should be, for crib and cross go together. You can’t have one without the other. Don’t just take my word for it; the angel said it first to the shepherds: “Good news. . . . Unto you is born this day in the city of David a Savior, who is Christ the Lord” (Lk 2:10–11). This little bundle of joy was born to save, in other words, to die, to lay down His life in payment for the sins of all the world.

This is the King of the Universe entering Jerusalem. When it comes to the kings we study in school, well, kings can be a problem; they make demands of their people; they insist on obedience; they are a blessing to a people, or they are a curse to a people. A King can be a good king or a bad one. History says most were bad.
While we know we live in a democratic republic, we also know a monarchy would be more efficient. If we had a monarchy, there would be a lot less yelling and screaming and exaggerating and lying going on with the news channels.

In the Bible, God’s people have seen two kinds of kings. And we are not talking good kings and bad kings. The first kind is shown in the Old Testament. The ancient Israelites wanted a king to rule over them “like all the (other) nations” (1 Sam 8:5). The Israelites wanted to be “just like the other nations” (whiny), having a king who would rule them and fight their battles (1 Sam 8:4–22). This made God mad because He was already their King. They wanted to downgrade. The Israelites thought they could do better, even though God had saved Israel from Egypt, provided for them in the desert, defeated their enemies, and so on. Are you starting to get it that when they asked God for a king like everybody else, that this was really dumb?

God instructed the prophet, Samuel, to warn the people “and show them the ways of the king who shall reign over them” (1 Sam 8:9).

Here is a summary of what God said:
“If you Israelites really want your own king:
(a) He will use your sons to protect himself in battle.
(b) He will take your daughters to be his bakers and cooks.
(c) He will take your property to enrich his friends.
(d) He will tax you to advance the wealth of his servants.
(e) In summary, you will be your king’s slaves.

When God pointed all this out, they said, basically, that they didn’t care. The Israelites rejected God. So God decided to give them what they asked for.  Now God wanted Israel’s King to serve God and seek God’s Wisdom. The first choice was Saul, and he started out humble and following God, but his ego got big and he crashed and burned.

Then came David. God took a shepherd boy and made him to be king. God often acts this way: He lifts up the humble. The kingdom of David would go well, until David slept with someone else’s wife, killed her husband, and never disciplined his children. After David came Solomon, and Solomon served God well until he had a thousand wives and concubines. Solomon is known for his wisdom…does that sound smart to you?

Then the Kingdoms of Israel and Judah split. Every King in the North was evil. 75 percent of the Kings in the South were evil. And that’s the way it went until God’s people were conquered by the Assyrians, the Babylonians, the Greeks and the Romans.

Eventually, God did get around to giving them a second kind of King. God sent a Humble King. The Humble King would come from a humble town: “But you, O Bethlehem Ephrathah, who are too little to be among the clans of Judah, from you shall come forth for me one who is to be ruler in Israel” (Micah 5:2). This Humble King would be the true king: “And he shall stand and shepherd [God’s] flock in the strength of the Lord, in the majesty of the name of the Lord his God” (Micah 5:4). This Humble King would bring peace, for He would Himself be Israel’s peace: “And [Israel] shall dwell secure, for now he shall be great to the ends of the earth. And he shall be their peace” (Micah 5:4–5).

Here, then, is God’s King of the second kind for you: Jesus is the new and humble King. Born in Bethlehem, the city of David: “For unto you is born this day in the city of David a Savior, who is Christ the Lord” (Lk 2:11). The sign of this King would be a “baby wrapped in swaddling cloths and lying in a manger” (Lk 2:12). Yet this humble child is the reality of heavenly peace on earth. The angels of heaven announce this: “Glory to God in the highest, and on earth peace among those with whom he is pleased” (Lk 2:13–14).

And in the Gospel reading today, The King comes to His royal city and to His house as a Humble King, riding upon the foal of a donkey (v 35). Yes, He is King—He will judge His temple and weep over the city’s rejection (Lk 19:41–46)—but He is that kind of King who will also be the sacrifice to save it.

Jesus staged a dramatic entrance into Jerusalem. He told His disciples where to find an unridden colt (vv 29–31). They were to untie it and bring it to Jesus. If anyone asked, they were to say: “The Lord has need of it” (v 31). The disciples did what they were told, and they said what they were to say (vv 32–34). And nobody threw them in jail for being donkey thieves. (That is what should have happened there. It is literally a miracle that it didn’t.) In this way Jesus fit the prophetic model of the promised Messiah (Gen 49:11; Zech 9:9).

He is both King and God. Yet he entered with humility. While Jesus knew what He was doing, the disciples could not grasp why He said He was going to be arrested, tortured and killed by the Romans. They thought Jesus was going to go to Jerusalem and lead the revolution to kick the Romans out. They thought He was that kind of King. The crowds praised Jesus as “the King who comes in the name of the Lord” (v 38). By the end of the week, their King would be killed, the victim of their sin.

Jesus insisted on fulfilling His Father’s will; being a different kind of King. He knew He must suffer, die, and be raised again. He knew He was to be the sacrifice for sin (24:46–47). In His death, He freed the whole world from bondage to sin (2 Cor 5:21). Jesus Was Determined to Die Our Death in Order to Free us, and we would not be His soldiers, slaves and tax base.

God’s idea of a REAL King for us, was His own Son, born as one of us to live the life we don’t, fulfill the Law we can’t, take our punishment on Himself, and then rise again to win us faith, forgiveness, and eternal life. This is God’s idea for a King. And it is so much better than anyone else’s.

As we make our way to Bethlehem, let’s remember we are also on the way to Jerusalem, Calvary, and the empty tomb. That’s our King, the One who died and rose for us.