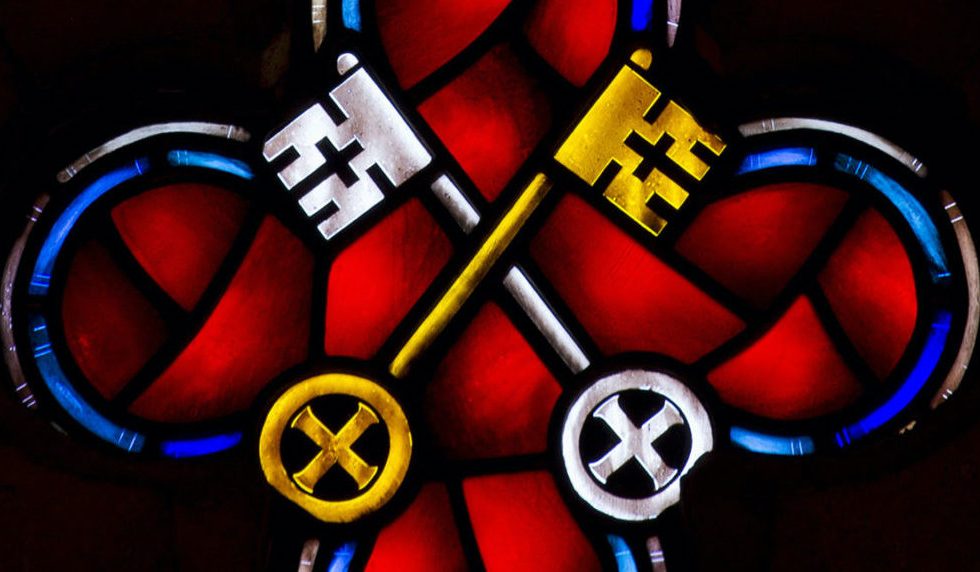 Today, we are going to talk about … keys. Keys are useful things. They help us get into stuff. They help us lock up stuff. Sometimes we lock our keys up in the things the keys open. That’s not useful or helpful. And we don’t want to lose them. If you have, you know what I am talking about.

While some of you here this morning have children who are still on the young side, many of you have kids who are all grown up, or mostly grown up. I have been told, by my parents as well as others, that one of the more traumatic experiences of dealing with kids who are growing up is the first time parents give car keys to their kids. It can be a scary time for parents when their child has their maiden voyage, so to speak. Erica and I are in this process. Christopher is learning to drive, and while he does not have his license yet, we figure it will be soon. When he soloes for the first time, well, if I were you I would by some stock in a company that makes valium. In the Gospel for today, Jesus gives some keys to Peter and the 12, but they are obviously not car keys, not house keys, they are the keys to heaven. Jesus, in the text for today, gives what Luther called the Office of the Keys, the power of the Church and its representatives to forgive sins. This morning we are going to discuss, “Being Given the Keys.”

This morning we are in Chapter 16 of Matthew. After last week’s text, where Jesus healed the daughter of that gentile woman, Jesus healed many people, fed another crowd of more than 4000 people, and got into an argument with the pharisees. This brings us to today’s Gospel.

The text begins with Jesus and His disciples coming into the area of Caesarea Philippi. Jesus is now beginning His journey back to the south, and He found himself 25 miles northeast of the Sea of Galilee. This is still non Jewish territory, but they were much closer to it than in last week’s text. Therefore, when Jesus asked the 12 who were the folks saying Jesus was, that question was being asked in an area that did not believe in the real God. The answers implied superstition and ghosts, that people thought Jesus was a reappearance of dead prophets, or the recently martyred John the Baptist. But then Jesus looked at the 12 and asked them who they thought He was. Peter, good old, impulsive, speak before he thinks, Simon Peter blurted out, “You are the Christ, the Son of the living God.” Peter, for a change, did good here. And Jesus pointed that out to Peter, showing him how he did not come to this information on his own, but that it was given to him by God. And that is a point I make a lot here, that our faith and the fact that we know Jesus is our Savior is not something we decide, or we have found out, but that it was revealed to us by God when we received our faith, which for most of us happened in Baptism.

Then Jesus told Peter that upon that rock, which was Peter’s confession of Jesus as the Christ, and not Peter himself, that upon the rock of Peter’s confession Jesus would build His church. He then told Peter that he was given the keys to heaven, that what sins he forgave would be forgiven, and whatever sins he did not forgive would not be forgiven. This is today known as the Office of the Keys, and we’ll get to that in a second. After that, Jesus told the 12 not to tell anyone yet that He was the Christ. Jesus was not quite done trying to get the point across that He was not an earthly messiah who was going to defeat the Romans militarily, but instead that His kingdom was a spiritual one.

Okay, now what exactly is going on here with this Office of the Keys stuff? Do you remember this from your confirmation? Well, let’s go to the catechism here this morning and get a little refresher this morning. Luther’s Small Catechism defines the Office of the Keys in this way: “The office of the keys is that special authority which Christ has given to his church on earth to forgive the sins of repentant sinners, but to withhold forgiveness from the unrepentant as long as they do not repent.” As it says in Free to Be, a Handbook to Luther’s Small Catechism, on page 197: “The key to the kingdom is forgiveness–Christ’s barrier-breaking, future-opening gift. Just as a key opens a door that has been locked shut, Christ’s gift of forgiveness breaks down all the barriers the old Adam raises in us, including the old Adam, himself.”

Further it says: “As this word is spoken to you, you can be sure God is forgiving you all your sin, that he has and always will. Christ himself is turning the key for you as these words are spoken, breaking down your yesterdays and opening up your tomorrows.”

In other words, when we talk about the office of the keys, when we see what Jesus gave to Peter in the text for today, and what Jesus gave to the Church in John 20:21, we see Jesus giving permission to the Church and its agents, who are its pastors, to dispense what Jesus won for us on the cross, namely, the forgiveness of sins. Now if this sounds trivial to you this morning, it shouldn’t. This stuff we are talking about today is not rare in the church or unimportant, in fact, it is found in every communion service we do here. When we confess our sins together, and when I pronounce absolution, I can do that because God has granted me and all pastors in the Christian church that authority to do so. That’s why it says, “…and in the STEAD (you know, instead of) and BY THE COMMAND of my Lord Jesus Christ, I forgive you all your sins.” Forgiveness, when it is received or pronounced here in church, is real. It is REAL. As it says again in the small catechism, “I believe that when the called ministers of Christ deal with us by his divine command,…and absolve those who repent of their sins and want to do better, this is just as valid and certain, even in heaven, as if Christ our dear Lord dealt with us himself.” This is good news, for we need forgiveness. We are sinners. Our sins should send us to hell. But here we can receive forgiveness.

Now you may be asking yourselves the question, “If Jesus died for our sins, aren’t we already forgiven?” Well, yes and no. When Jesus died on the cross, and rose again three days later, He won for EVERYBODY (we talked about that last week) forgiveness of our sins. BUT, that forgiveness, like all the gifts of God, can be rejected. And about 6 billion people have rejected them. These gifts, however, especially forgiveness, can be received here. We can receive forgiveness, and do receive it, in Baptism, the Lord’s Supper, and in confession and absolution. This is why it is good to be here.

By the way, we not only have group confession in the liturgy here in the LCMS, but individual confession, too. Unlike our Roman Catholic brothers and sisters, we do not REQUIRE it. But we can do it, and sometimes I think we shortchange ourselves in not making use of it. I’ve only done that twice for folks in 29 years of ministry.

At any rate, when Jesus died on the cross for us, and rose again for us, the wages of sin was paid for all mankind. But that forgiveness still needs to be given out, we need to receive it. The Holy Spirit does that, and it is here that we can receive it. So the Office of the Keys is something God gave us to get us what we need from Him.

To wrap up, normally, when we think of keys, we think of car keys, house keys, and stuff like that. But in the Gospel for today, Jesus gave to His church the Office of the Keys, yet another gift from God, and another way to make sure we can receive the forgiveness that Jesus Christ won for us. When absolution, forgiveness, is granted here in our services, it is not for show, it is not just symbolism, the forgiveness we receive is real, complete, total, and valid, right from God. Not only did Jesus die and rise for us, but He also gave His church the way to get all His gifts/to get what He gives. And one of those is with the Office of the Keys. And those are some kind of keys. Don’t want to lose those, do we?