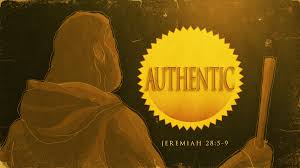 Last week, when we gathered here, we talked about how sometimes we have to tell folks things they don’t want to hear. Today we are looking at the other side of the coin. Have you ever known someone who always told you what you wanted to hear? Even if it wasn’t the truth? Kids can do that sort of thing with parents. Politicians can do this. We really don’t want people to do this, especially doctors. Sadly, there are pastors who do this as well. We need to know the truth, not just hear what we want to hear.

Jeremiah had been warning the people about their sins and their need to start living and worshipping the way God wanted them to, and he had told them that things were only going to get worse in their country if they didn’t repent. The king of Babylon had already taken away a lot of people, their king, and some of the furnishings of the temple. And he’s going to do worse than that.

As we discussed last week, while Jeremiah was telling Israel things that were hard to say, there were others who claimed to be talking for the Lord who were just saying what everyone wanted to hear. One of those guys was a dude named Hananiah. Hananiah did not preach what was actually true. Today we continue to talk about our need to hear the Hard Truth.

Israel did not want to hear that Babylon was coming to take them away. The Babylonians were going to “own” Judah. (And I am using the word “own” like people today who say, for example, that OU owns OSU in Football Bedlam these days.) Babylonia was going to dominate the people of God, steal their treasure, and hold their leaders captive.

How could the Lord allow it? Isn’t He a defender of His people? That question is an old one. This question is still asked today when things go bad. And I think many have asked this question in 2020. (George Floyd, airliner shot down, earthquakes, locusts, Sahara dust storm) It’s built on the assumption that earthly success, honor, and glory naturally come to God’s people. There are those who think that if they believe at all, God should give them whatever they want. Today we have false prophets like Hananiah was, people who preach: “If you have faith, God will heal you.” “If you have faith, God won’t let anything bad happen to you.” “If you have faith, God will protect your things/stuff.” Through the ages, those who have trusted Hananiah’s message have been deceived into believing that God’s place is to give them stuff. Jesus will fix all your problems. He’s in heaven to give you what you want. Name it and claim it. But Jesus said, “Do not lay up for yourselves treasures on earth, where moth and rust destroy and where thieves break in and steal” (Mt 6:19). He’s telling us we shouldn’t listen to Hananiah or his homiletical descendants.

What’s so bad about Hananiah? First, false prophets like Hananiah try to make us far too comfortable with earthly comforts and kingdoms. Just like some false prophets today, he tried to sell that God is a supporter of the homeland. Hananiah told Israel that God would never allow anything that bad to happen to them. He said, and this is in the verses before what you see in the bulletin, he said that Babylon was dead, that within two years all the stuff the Babylonians had taken from the temple would be returned, and everyone that had been taken off into exile would come back. In two years. (Didn’t happen.) Hananiah said, in effect, “God is a patriot who will support our land,” even though the Israelites had sacrificed their children to the Baals. My DNA goes back to Germany, Saxony. Northeast of there was Prussia. The old Prussian nation no longer exists. It was mostly Lutherans. The army that could not give them victory wore belt buckles that said, “God is with us.” The Hananiahs today say God won’t let anything bad happen to us, and in the same paragraph say abortion clinics are doing the Lord’s work, and all religions are different roads to the same place, and what the Bible teaches about morality was only valid when it was written, and not today.

Second, Hananiah doesn’t speak like a real prophet. This one is a little harder to understand. Jeremiah teaches, “The prophets who preceded you and me from ancient times prophesied war, famine, and pestilence against many countries and great kingdoms” (v 8). Real prophets don’t forget that we are sinners, there is sin all around us, and that even the ground we walk on is cursed (Gen 3:17). The nations we see will not last forever. The possessions we have will leave us unsatisfied and unsaved. And the earthly accomplishments, skills, and glories we spend so much time on will pass away, forgotten by time (Eccl 1:11).

Most pastors will minister to parishioners on their deathbeds. It’s surprising how often the family of the dying person will try to keep the pastor from talking about death. We all need to be ready to stand before the judgment seat of God. Pretending it won’t happen is not very wise, and it isn’t faithful. False prophets turn us away from looking at the truth of our life and death, and therefore they turn us away from our need for our Savior who died and rose again. A true prophet/pastor will say there is more to life than this, that we are sinners in need of saving, and that heaven is our destination and our destiny.

Third, Hananiah preached that God must bring peace. Jesus said in our Gospel lesson, “Do not think that I have come to bring peace to the earth, . . . but a sword” (Mt 10:34). But isn’t Jesus the Prince of Peace (Is 9:6)? Yes, He is. But His peace is not a peace that comes from surrendering to His enemies or sacrificing truth or love for the sake of quiet. Jesus is the King of the Church Militant. Jesus does not peacefully coexist with evil. He does not seek a compromise with those who disagree with, and contradict, His Word. Jesus overcame evil by taking all its lies, threats, fury, and murderous rage, taking it all to the cross, and coming out alive and victorious.

Jeremiah may sound like a prophet who prophesies doom . . . and he is! But it is doom to the false hopes and false dreams of false prophets. Jeremiah prophesies about the God who does not lose no matter how strong or popular His enemies appear. Jeremiah teaches the Word of God that does not determine right or wrong based on an opinion poll, but on His all-knowing love for His people. Jeremiah teaches about a God who preserves His people even though kingdoms, rulers, and fortunes come and go. His victories are timeless, and His people have eternal life.

Most important, Jeremiah teaches us how to tell true prophets from false ones. “As for the prophet who prophesies peace, when the word of that prophet comes to pass, then it will be known that the Lord has truly sent the prophet” (v 9). Like Jeremiah, the true prophets said God would raise up a Savior who cannot be corrupted and will not fail (Jer 23:5; 33:14–26). That happened. God did that.

These prophetic messages and many more have come true through the work of Jesus Christ, the one of whom all the REAL prophets spoke and still speak today. He has delivered His people from sin, death, and the power of the devil. He has brought true and eternal peace that can come only from Him. He has endured all the deadliest weapons of the enemy and was victorious. He even defeated death. All the nations have heard the voice of His prophets and His people have His words written on their hearts. In the end, Jeremiah Proclaims to Us Real Good News Instead of the Lies from Hananiah and all the false prophets and their fake news. How do we know? Because through Jesus Christ, all the words of the apostles and prophets have come true. He died and rose again for us just like they said He would. In Him, we have love, we have forgiveness, we have eternal life, we have peace. This is the truth.