“The Foolishness of the Cross”

“The Foolishness of the Cross” 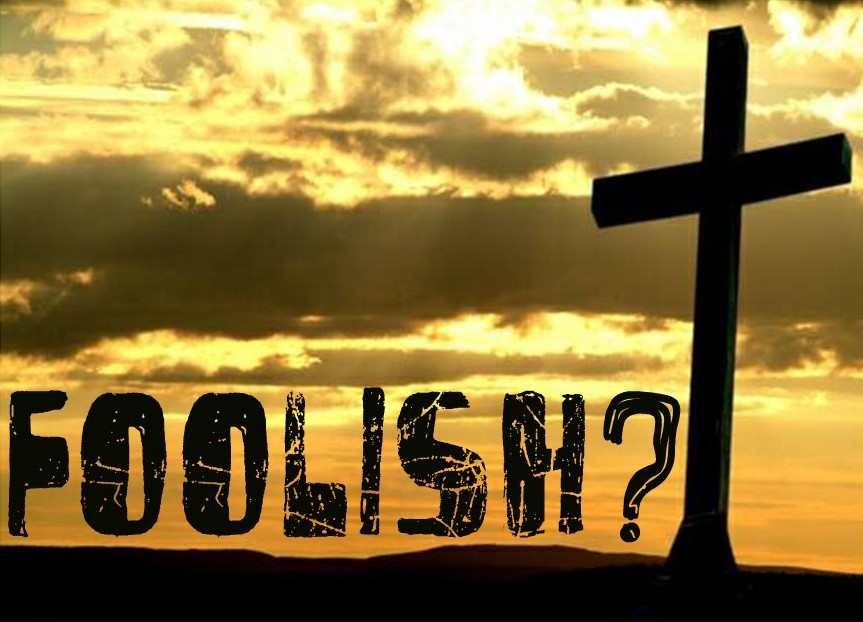 We live in a world of customization. We can walk into a car dealer and get a car with automatic or a manual transmission, built in GPS or not, satellite radio or no satellite radio, sunroof or none, pick your color, and so on. We can get a satellite dish and pick what channels we want to receive. You can go into a burger joint and tell them, “Hold the pickles, hold the lettuce…” (Again, you have to be my age to remember that one.) Scientists are madly working on a way that would allow parents to have a boy or girl by their choice, and not God’s. And people want to treat God this way. We often will go to God and tell Him how we want Him to be. We may reject Him or be disappointed in Him when we do not get what we want from Him.

Paul addresses this dangerous line of thinking in our text today. And we are reminded that in the TRUE God, we have a Creator, Saver, and a Grace Deliverer who is smarter and wiser than we can ever know. And He loves us enough and is “foolish” enough, to have made use of The Folly of the Cross.

Do you like it when someone says you are foolish? We do not like it when we ARE foolish. Foolish is a negative word, right? I remember when I was in high school (and how many stories of foolishness feature being in high school?) and I had my driver’s license about 3 months. I took a gal named Meg Collins to see Star Wars in my dad’s 1974 Pinto Squire Wagon, lemon yellow with the wood paneling on the side. Yuck. It had a manual transmission. I have always liked driving manuals. My white Honda out there is the first car I bought for myself that did not have one. Anyway, I took her home in this Pinto Wagon after the movie. She considered herself a liberated woman and did not want me to pay for her ticket, so as she got out of the car she threw a couple of bucks on the seat and took off running for her front door. I, being a traditional, chivalrous male, grabbed the money and ran after her to give it back. In my haste, I forgot to do something. She beat me to the front door of her house, so I left the money in her mailbox, turned around, and saw my dad’s 1974 yellow Pinto Squire Wagon rolling down the street and in the general direction of a fire hydrant. Remember when I said I forgot to do something? I had not left the car in gear, nor had I set the parking brake. I can just picture the smile on God’s face as I ran after the car praying (FERVENTLY) that the car would turn a little bit more and miss the hydrant. It did, although the car did run up on some guy’s front lawn. That was foolish.

It is very easy for us to look at others and see that what they do or what they say is foolish. We look at many people and their actions and label them as fools. Facebook and Twitter are good places to do this, yes? I know I am good at going on the internet and reading stuff that I believe was written by a fool. My mother, when she was still with us here, was very good at looking at neighbors, friends or acquaintances and say that what they were doing or saying was “ridiculous.” The traffic was ridiculous, the prices were ridiculous, the way that person looked was ridiculous. This is easy for us to do.

Would anyone here this morning be bold enough to stand up and say that something God has done or said, is foolish? With our general definition and understanding of that word, that would be a bad idea. While we may not refer to God as “foolish,” the truth is that we often accuse God of not caring, of not working within our time frame, or allowing His Word to become “outdated” in these modern times. We often think that we are smarter than God. We often think that our plans, our timelines, our schedules are better than God’s. How often have we been mad at God or felt let down simply because He did not answer our prayer the way we wanted when we wanted? Are we any different from the Jews and Greeks whom Paul is referring to in our text?

One of the criticisms that Paul had for the Jews of his time was that they kept asking for signs from God, signs that this Jesus being spoken of is truly the Messiah. When we are in a bad mood, we can get mad at God and say, “Are you there? Show me something!” I have run into many people in my life who say, “If there is a God, let Him prove it to me.” And I tell these people that all you have to do is notice the sun rising, or hold a baby in your arms, or study physics for five seconds and know that God is there, God is here.

Another problem we have is we may be like those Greeks of Paul’s day and expect God to act like us. We often demand that God “get” that enemy we have, to smite that person who slandered us, to give that person who hurt us a plague of boils, or some such thing. Many times, we can catch ourselves being disappointed with God when He does not act like we do, or if His Word says something that goes against our logic. I would put it to you that expecting God to do what we tell Him, expecting Him to behave the way we often behave is, well, foolish.

We need to be reminded that it is a good thing that God is not like us. It is a good thing God does not act like us, or talk like us, or punish like us. If He did, hell would await us all, right? Would you sacrifice your only child so I could go to heaven? But that is what God did. He did a “foolish” thing. To save us, to rescue us, to take away our sins, He sent His Son Jesus to die on the cross for us. Now, what person would come up with that idea to save us? People for 2000 years have said the Gospels are foolish because there is no god who would act this way. Paul wrote, “…the word of the cross is folly to those who are perishing…” He points out that the Jewish hierarchy and the Greek philosophical leaders thought they were so smart, just like the Christian bashing Twitter hordes out there who think they are so much smarter than us. But God in His “foolishness,” allowed His Son to be nailed to a cross, a brutal, ugly way to die (just ask Mel Gibson). The Almighty Co-Creator of the universe nailed to one of those. Foolish. That’s what a lot of people out there think. Again, Paul, “But God chose what is foolish in the world to shame the wise; God chose what is weak in the world to shame the strong; God chose what is low and despised in the world…to bring to nothing things that are.”

I think it is plain to see that Paul wanted to bring the focus of the Corinthian church back on Jesus Christ. He didn’t want them to focus on demonstrations of God’s miracles. He didn’t want them to focus on seeking earthly wisdom. He wanted them to be focused on Jesus. That is where our focus must be. We should not focus here (heart), we should focus here (cross).
Scripture is God’s Word to the wise. It tells us of the God who is, not the god we want. The God of the Bible is the only true God. Through Jesus’ death on a cross and His resurrection, He has brought to us the only way to eternal life in heaven.

Because of Jesus’ death on the cross and resurrection three days later, and our Spirit created faith in that seemingly foolish way of salvation, we are forgiven fools. We are fools for Jesus Christ’s sake. If proclaiming Jesus crucified, and living under the truth of the cross of Jesus, and in the freedom of His empty tomb is foolishness, then call us fools: fools forever, fools forgiven, and fools for Jesus! One more time with Paul, “He is the source of your life in Christ Jesus, whom God made our wisdom and our righteousness and sanctification and redemption. Therefore, as it is written, ‘Let the one who boasts, boast in the Lord.’”