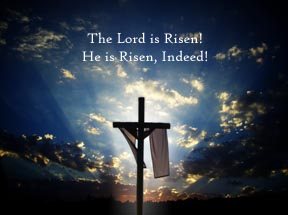 In the First Commandment, God forbids you from having any other gods than him. You are to fear, love, and trust God above all things. Because He wants to be God for you! For your benefit.  In fact, there is no other God than the Triune God, Father, Son, and Holy Spirit. The events of this day tell us this is most certainly true.

You had such high hopes in Him. Jesus was everything to you. You followed Him because you believed He was the Messiah, the promised Savior. He did things only God could do. He said words only God could possibly say. This always amazed you, many times to the point where it sacred you to death. You were there when He healed a paralytic and forgave His sins. That amazed everyone (Mk 2:12). When He stilled the storm, you were terrified and asked one another: “Who then is this, that even the wind and the sea obey him?” (4:41). You were astonished and absolutely amazed when He brought Jairus’ dead daughter back to life (5:42) and when He walked on the water (6:51). On the mountain, His appearance changed, transfigured; you were scared out of your wits (9:6). Could He be . . . ? He could be . . . But then He went and preached a scandalous sermon series about heading up to Jerusalem. He had a Jerusalem mania. Jerusalem on the brain. Obsessed with doing Jerusalem He was. Three times He boldly and audaciously proclaimed that He’d be . . . handed over to the religious bigwigs. Arrested! Manhandled! Spit on! Ridiculed! If that wasn’t bad enough, He repeatedly promised that He’d be put on death row, flogged, and killed. Then He said something about rising on (what was that?) . . . the third day. Really? Again, you were totally blown away. Astonished. And genuinely scared.

But you’d get over it. And you thought He would too. That Jerusalem thing was just a fad—you thought. After all, these kinds of things don’t happen—aren’t supposed to happen—ever—to Messiahs. And Jesus was the real deal. At least you hoped. Especially after all the miraculous things He did and the sermons He preached with authority.
Now what? He’s dead. Buried. What good is a dead and buried Jesus? Can you trust in Him anymore? Can you?

Now what are you going to do?

All that’s left is to let the ladies who took care of His physical needs during His earthly life do their thing. They looked after Him. Might as well do it one last time. Spices in hand, Mary Magdalene, and another lady named Mary head to the grave to anoint His dead body.

As they approach, there is an earthquake and an angel of the Lord rolls away the stone from the entrance to the tomb. The dudes guarding the tomb faint. And the Angel says, “No need to be alarmed, ladies. I know you expected to see the corpse of the crucified Nazarene Jesus. Well, He is risen. JUST LIKE HE SAID HE WOULD. Therefore He’s not here. See. Take a look. This is where they put His body. Not there anymore! Now, you go tell His disciples and especially Peter. He’ll meet you in Galilee. You’ll see Him there just as He told you.”
What? Can it be? Really? He’s risen from the dead?

Absolutely! Remember the last part of the Jerusalem fixation? On the third day . . . ? Now we understand!

Consequently, you and the women are visibly shaken. You never expected this to happen! Seriously, you didn’t! Your hearts are pounding. The adrenaline is flowing. Your minds are racing. Your hands are trembling. All your thoughts are jumbled, you can’t think straight at the moment. So all you can do is beat it. Bolt. Skedaddle. Afraid.

Well, I’d better remind you of something else the preacher in the tomb told you. After all, sermons are so easily forgotten, in one ear and out the other. He said: “But go, tell His disciples and Peter. He’ll meet you in Galilee. You’ll see him there. He said so. He promised.”  Meet Jesus in Galilee?  You’re reluctant to go there, aren’t you? Of course you are. After all, you’ve all got a bad conscience. You and Peter denied and renounced Jesus and called down curses on yourselves. You deserted Him. Left Him high and dry when push came to shove. You wouldn’t be caught dead hanging around the humiliated, arrested, and sentenced-to-death Jesus. You wouldn’t let Jesus be God for you in His shocking suffering and appalling Good Friday dying! You stayed away! You had no use for Him!

This is why you’re so hesitant to go meet Jesus in Galilee. You are uncertain. After all, what do you expect from Jesus—the Son of God, whom you abandoned and disowned—if He’s truly risen from the dead? What do you expect? Payback, right? Vengeance for your unfaithful sins against Him, right?

Not going to happen. Not even close. He is risen! From the tomb! And because He did that, what He is going to give you is totally amazing. Mind-blowing amazing. He would meet you to . . . (are you ready for this?) . . . to greet you with a friendly and courteous Easter “Hello, friends!”

And more! So much more. He will tell you the best news you could ever hear as a sinner. It’s this: “I Am God for You. I am not your enemy. I am not against you, but I am God for you: I died for you. I took all your sin. I buried it in the black hole of my tomb, and I left it there forever. It is no more. I forgive you. I don’t count your sin against you at all.”

And the things that you get with this divine Good Friday and Easter forgiveness are the resurrection of the body and life everlasting. Because Jesus rose, His Good Friday death was not in vain. It truly counts for you. You are forgiven. Since He forgives you, you, too, will be raised on the Last Day from the grave. He will not leave you there. You are that special to Him. He died and rose FOR YOU!

This is the God who tells us we should have no other God’s. And He is absolutely RIGHT! We should fear, love and trust in Him, above all things. The Lord is Risen! (HE IS RISEN INDEED.)
This is Most Certainly True.

In the name of Jesus.